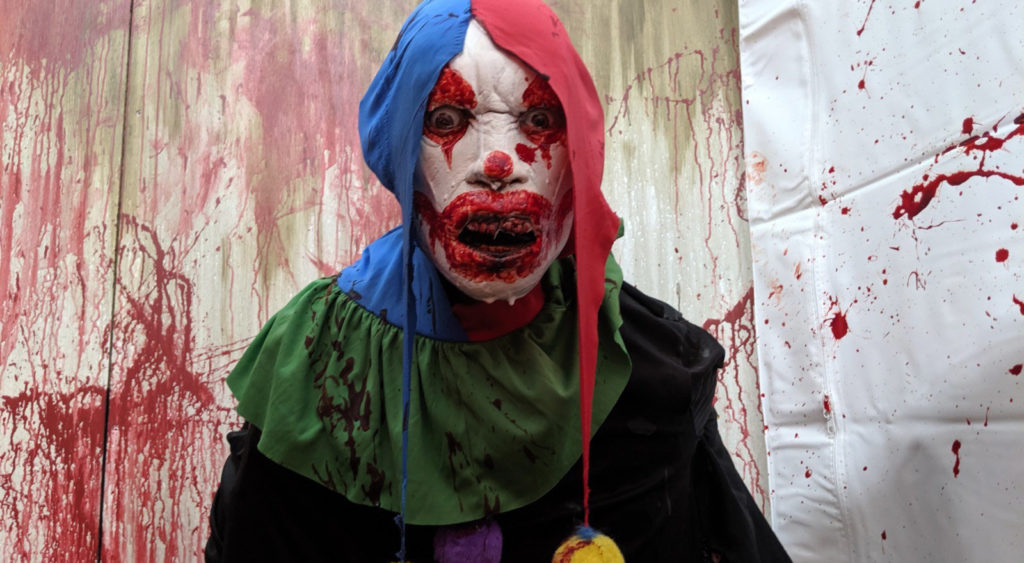 Honkers the Clown is dead, and you’re invited to the funeral.

Services are being held at Kentucky Kingdom every weekend through October as part of the theme park’s HalloScream seasonal attraction that includes a pair of haunted house attractions, a Friday the 13th ride, plus Halloween-themed food items, beverages, bars and souvenirs.

“Die Laughing: A Clown Funeral” is one of the main attractions, a maze of cartoonish mayhem that starts you off in a funeral parlor filled with clowns and coffins and takes visitors on a journey that, for anyone who suffers from coulrophobia, might be a bit disconcerting.

Those who attend will make their way through a clown morgue, a clown tunnel with decapitated clown heads hanging from the ceiling, a clown autopsy room and a maze of red and white curtains, guaranteed to confuse.

While touring HalloScream with Kentucky Kingdom’s director of guest relations Jessi O’Daniel, we came across a feature in Die Laughing that had just been added — dead clowns hanging in body bags.

“Our friends at Oak Island are twisted and come up with things like clown funerals,” she said nonchalantly, pushing past the blood-soaked body bags.

Oak Island has clients nationwide and never replicates a concept, which is to say that if you want to attend a clown funeral, this may be your only chance. It’s worth it for the whoopee cushion room alone, or the chainsaw clown that, shall we say, escorts visitors out. And it might even be a way to exorcise some demons from long ago, as plenty of people grow up fearing clowns.

“It really turns your childhood against you,” O’Daniel said, walking past a clown graveyard that is, fittingly, set in a kids’ ball pit.

“Zombie Wasteland” is set in a salvage yard of sorts in the midst of a zombie apocalypse. Junked-out appliances, dumpsters and other items provide plenty of places for the roughly 100 actors that fill the HalloScream area in the park, waiting to provide scares. There are even a few blood-splattered and disgusting portable toilets that, well, look like they might have seen one too many Thunder Over Louisvilles.

Interestingly, the appliances were new when Oak Island brought them in, O’Daniel said. The attraction also features plenty of hiding spots for actors to execute unexpected scares. In other words, if you walk past one of the dumpsters, don’t be too surprised if there’s a zombie lurking inside.

Once the concepts were created, the transformation of the park amazingly happened over the course of four days.

“It pretty much was a team effort,” O’Daniel said. “Everybody was excited and pitching in to get it done.”

Haunted houses were designed to keep visitors flowing through. One zombie, strapped to a chain link fence, has an arm extended, quietly urging attendees in a certain direction. O’Daniel said he has been nicknamed “Directional Dan.”

“Even the zombies have jobs,” she said.

The “Friday the 13th in 5D” ride features a montage of the 2009 reboot of the classic series, staring the hockey mask-wearing killer Jason Voorhees. The ride mainly involves Jason taking out annoying teenagers — riders will witness 13 deaths in all. And there may be a few bumps along the way.

“It’s pretty intense,” O’Daniel said. “So many people chicken out at the pre-show.”

When you’re finished having the bejeezus scared out of you, shop at the Bizarre Bazaar. Then, hit Frank N. Stein’s Laboratory for a drink in a bubbling beaker and a Halloween-themed bite to eat, be it a Frank’s Monster Burger or an order of Cocka-Doodle-Doom wings. Then, finish it off with a pumpkin spice frozen dessert. There’s also a Mardi Gras-themed block party called Mardi gRAVE where food and drink are available, along with another bar called BARely Alive.

The food items were created especially for the event by executive chef Aaron Banks and are prepared fresh, according to O’Daniel.

Also, don’t be surprised if you encounter spooks along the way. A zombie may well bring your food to you, and you might just get the fright of your life from costumed creatures wandering HalloScream. In other words, Kentucky Kingdom is holding nothing back with this one.

“It’s not normal for a theme park to do such complex things,” O’Daniel said. “It’s fun.”

Park admission of $29 includes rides and entry into the haunted house attractions. Purchase a 2020 season pass for $59 and get access to HalloScream. A 2019 season pass gets you into the park, along with $10 admission to the haunted house attractions. The park will be open 6 p.m.-midnight on Friday and Saturday and 6-11 p.m. on Sunday, through October.