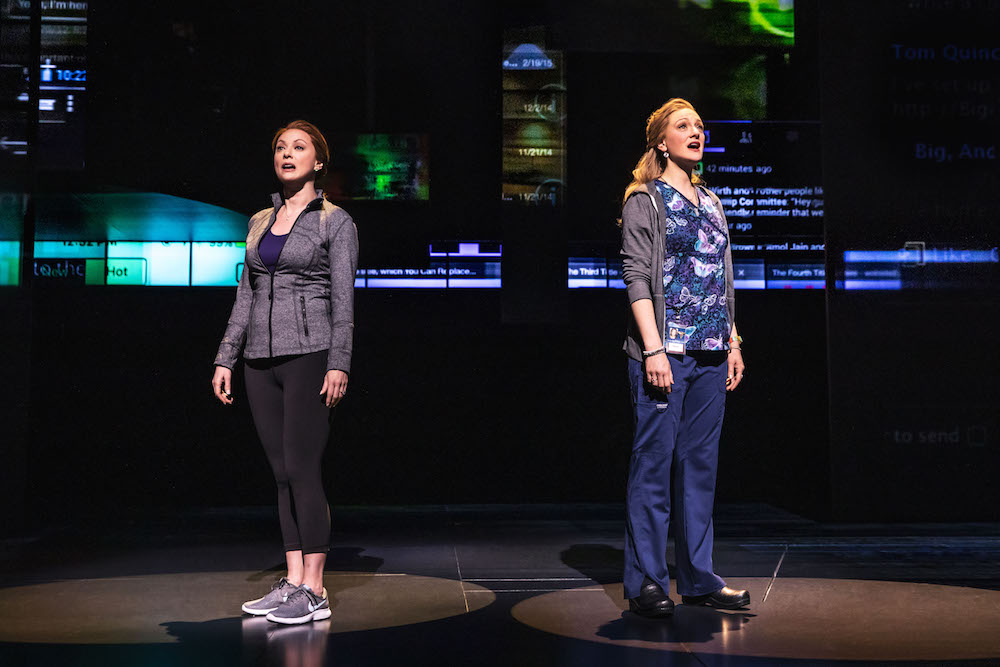 “Dear Evan Hansen,” with its story of a high schooler with painful social anxiety facing his senior year and trying to make friends, makes a poignant production as PNC Broadway in Louisville’s series opener at the The Kentucky Center.

From the early moments as Evan Hansen, Stephen Christopher Anthony engenders enormous sympathy as he fidgets and speaks at a rapid pace when Evan’s nerves seem to be working in overdrive — which happens often. To calm them, he writes letters to himself. “Dear Evan Hanson,” they begin.

Just in the first semester of the school year, Anthony carries the weight of Evan’s awkwardness through his encounters with classmates at school who discount and disparage him. He even endures a confrontation with Connor, a sullen classmate, who is also is an outcast. Connor finds one of Evan’s letters and takes it.

Since its 2016 Broadway premiere and winning six Tony Awards and a Grammy Award, this musical has become a favorite among young theater fans and beyond. In partly because of the pop-laden music and jaw-dropping drama.

Coaxing him to write and to make friends — although rarely at home — is Heidi, Evan’s single mother who works and attends classes at night to be a paralegal. Played by Jessica Sherman, Heidi’s own anxiety about Evan churns early on.

What makes this musical different is the risks it takes. The anxieties of teenage life are in the spotlight, as are some of the cruelties, against an opulent scenic design by David Korins and projection design by Peter Nigrini. These designs are frequently dominated by social media feeds. Even as small set pieces of Evan’s bedroom, other domestic settings and the high school world roll onstage, they are framed by panels of a nearly constantly changing and colorful social media world.

More specifically, the story examines isolation and even touches on suicide. Soon after the incident with Conner, Evan learns Conner has killed himself, and his letter was found with Conner. From here, Evan sees an opening. He lets people believe the two were friends.

But the teenagers’ stories don’t overshadow the parents’ struggles. (This is a musical that can open up family conversations.) The story of their isolation, particularly Heidi’s, bubbles up as she is trying to be in many places in once while trying to raise her son. Sherman brings a range of Heidi’s struggles to bear with a powerful voice, although sometimes it overwhelmed the sound system on opening night.

Evan and his high school cohorts — most who don’t know this lie — drive down a rabbit hole into a project to remember Conner, who had no friends. It’s a sham Evan can’t stop himself from riding on — now that he feels that he is being seen by classmates and others for the first time.

The ride — one built on a lie — is bound to crash.

During opening night, much of the audience sat engrossed — leaning forward in their seats or sometimes covering their mouths — during the second half as the drama unfolded.

The songwriting team of Benj Pasek and Justin Paul has lined who whole ride with beautiful melodies and lyrics that make it seem less menacing that it really is. (“For Forever” and “Sincerely Me” sound similar to Ben Folds’ work.) Much of Evan’s lie is propagated across the social media. His imagined fall would seem much steeper than it actually turns out to be.

In the end the truth does come out, as it must. Evan knows this — as he has all along. In “Words Fail,” when Evan sings about how broken he is, that confession comes. Anthony’s heartbreaking solo becomes a high point.

The production drives home the value of truth, which is part of the beauty of “Dear Evan Hansen,” based on the book by Steven Levenson. The story asks people to look at the characters and themselves, find their own truths and examine how they might undermine systems of isolation around themselves.