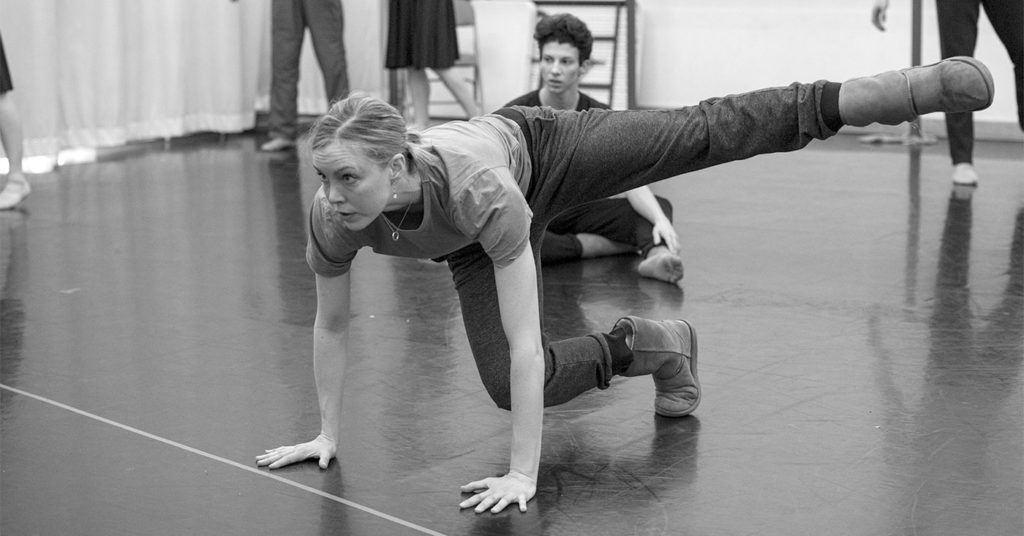 Choreographer Andrea Schermoly had envisioned a dance based on a story of a child who dies too young. When Robert Curran, the company’s artistic and executive director, asked her to create a piece with the title “at High,” her story and dance had a home.

For more than a month now, the Los Angeles-based Schermoly has been working in Louisville with 13 dancers: 10 men and three women. A dancer, David Senti, represents a boy at the story’s center who has helped shape the narrative. “He and I share a similar idea of how to create movement — which is without force,” said Schermoly, who became Louisville Ballet’s third resident choreographer in 2018 and the first women ever to hold that title. “So, the movement has a wind-blown effect. It’s not muscular.”

As for the music, Schermoly was cycling and listening to music when she found herself lost in parts of Mahler’s Fifth Symphony. “It just seemed heavenly on high,” she said. “Like being in an afterlife and looking back.”

For the dance, instead of that Fifth Symphony, Schermoly settled on the third movement of Mahler’s Fourth Symphony. Mahler’s two symphonies share some characteristics. Moreover, the Fourth Symphony draws on direct themes of childhood and loss. In between writing them, the composer himself had a near-death experience.

With Mahler’s music and powerful subject matter, Schermoly set high sights for herself.

“The music changes constantly,” she said. “Every few measures — both in tempo and in context — it goes from being very ethereal to being like a circus act to very high drama to somber and melancholy back to a drunken circus moment.”

But Schermoly doesn’t feel required to match her choreography to the music.

“I don’t want to be too precious with every note,” she said.

“Whoosh,” she said. “These waves of people enter through the clouds. It can give it an ethereal feeling without making them seem like angels.”

Less than two weeks before the premiere of “at High,” during rehearsals, Schermoly has been focusing on several movement themes, including one of spiraling, where dancers don’t get caught in one place for long. She described the movement as washing away like a “wave-like quality.”

“at High” makes its world premiere on a program that includes New York City Ballet co-founder George Balanchine’s famous “Serenade.” Also on the program is “Velocity,” an energetic work by Houston Ballet’s artistic director Stanton Welch, who created the piece in 2003 for The Australian Ballet, where he once was a resident choreographer as well as a dancer with former fellow company member Curran. •

This revived “Appalachian Spring” featured Graham’s bold and angular forms and staccato movement integrated with Schermoly’s couples who frequently slid their arms and legs past and around each others’ torsos — sometimes upside down — as they turned and traversed the stage. Their rolling bodies coupled with the music gave the impression of waterwheel mills found decades ago on the banks of this country’s rivers and creeks.

Later this month, Schermoly will revisit Graham via the Louisville Ballet’s collaboration with the Louisville Orchestra in its Oct. 26 “Violins of Hope” concert. It is part of a community-wide event by the same name to mark an exhibit of 50 restored violins owned and played by Jewish musicians who were killed during the Holocaust.

The orchestra-ballet program includes William Schuman’s “Judith,” which the orchestra premiered at Carnegie Hall in 1950. Back then, Graham danced onstage, debuting her own accompanying work as a soloist. For the upcoming concert, Schermoly has been recreating the great American choreographer’s work.

“This year, I’ve been in Louisville more than anywhere, which seems crazy,” she said. But time spent here holds sound advantages, particularly getting to work with and know the company members better: “They are getting to know what I like. It’s such a learning curve.”

There was a long interval between her first piece with the company and “Appalachian Spring.” In 2015, Schermoly brought her haunting and memorable work “Fractured” to the company’s Choreographers’ Showcase. The eerie piece echoed the exacting movement and the drama found in some of the repertoire of the renowned Netherlands Dans Theater, where she danced with two of its groups for six years.

For this South African-born artist, life has consisted of a lot of moving from her young life traveling as a member of The South African Olympic Rhythmic Gymnastics Team to when she moved to London to attend The Royal Ballet School. After graduating, she joined Boston Ballet, where she danced leads before going to dance with Netherlands Dans Theater.

About nine years ago, she settled in the United States and began pursuing choreography. For four years, she earned awards in competitions and found other opportunities to create work, before she began getting gigs with companies. Around that time, the Louisville Ballet brought her to the city. Since then, the gigs have mounted with work coming from Grand Rapids Ballet, Kansas City Ballet, Royal New Zealand Ballet, SFDanceworks and, earlier this season, the Cincinnati Ballet.

Schermoly described “Swivet,” the work for Cincinnati Ballet, as a “flip-side of the coin” of what she is choreographing for Louisville Ballet. “The music was crazy, techno-crash. The dancers were on pointe and wore pleather.”

Some of her inspiration comes from choreographers. Among them are artists with roots in Netherlands Dans Theater — Jiří Kylián, artistic director from 1975 to 2004; and the Swedish choreographer Mats Ek, who began his career in theater. But she counts visual artists among those who inspire her most — Mark Rothko and Yves Klein at the top. “I like that bold vibration,” she said of Rothko’s colors. She talked about Klein’s bold blues that sometimes swish and seem to dance.

This inspiration seems to come inherently — her grandfather was a painter, and her father and uncle are both designers. However, she vows she works to never come to dance with the mind of a designer. This, after all, is from a dancer who once took a sabbatical to enroll in acting classes. Schermoly wants to tap into the emotion of a story through movement and work with dancers to find that, too. “I want people to live, actually live through their bodies and be human emotional creatures on stage,” she said. •