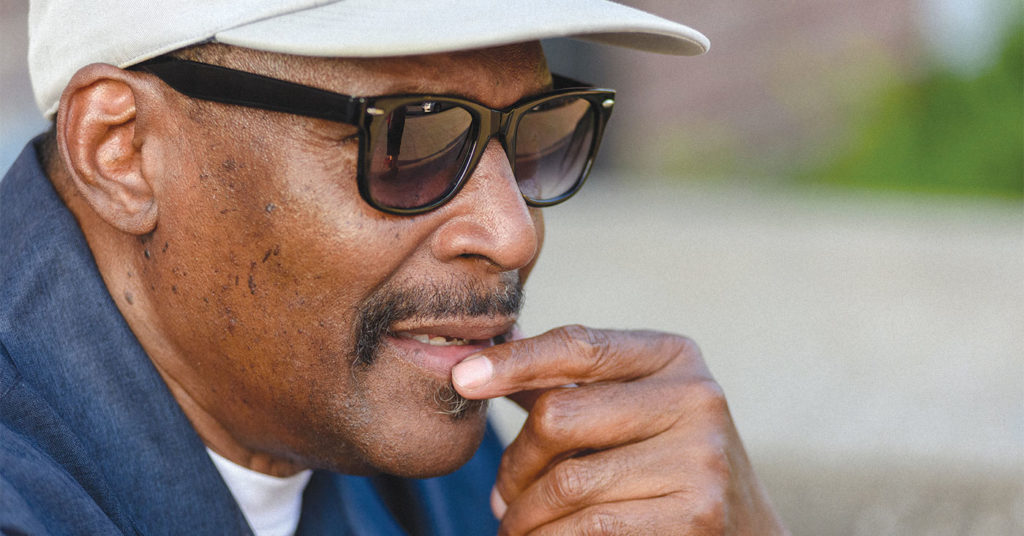 Eddie Woods, director of No More Red Dots, on the steps of the Baxter Community Center in the Beecher Terrace neighborhoodPhoto by Brian Bohannon

Three months ago, Eddie Woods lost all city funding for his grassroots violence-prevention team due to citywide budget cuts.

But now, three months later, Woods and his organization, No More Red Dots, are still going.

“It’s been a struggle, but we knew it would be a struggle,” Woods told LEO.

Today, he has about 16 volunteers, down from 22 employees. Several had to leave to find jobs, but a few new people stepped up.

This reduces the network Woods has to work with. His volunteers are street-savvy individuals, who respond to shootings and rumors of imminent violence to try and prevent more harm from happening through conflict resolution. Fewer people has meant fewer relationships that No More Red Dots can draw upon.

But, city funding also meant city rules, and with those gone, Woods said he believes No More Red Dots is ultimately more efficient.

“The situation with the city and how they wanted the work done was interfering a lot with our network, because they wanted two neighborhoods taken care of: Portland and Shawnee,” Woods said.

No More Red Dots had traditionally operated throughout the city, following shooters or disturbances across neighborhood lines.

Last fiscal year, the city beefed up its funding to No More Red Dots and with that added more rules for the group. Woods said that, as a result, his employees’ response times suffered.

Today, however, Woods thinks his response times to problems in the city are faster because he’s been able to train his new volunteers to use their personal networks.

From the city’s perspective now, three months later, Rashaad Abdur-Rahman, director of the Office for Safe and Healthy Neighborhoods, said he expects that slashed funding to No More Red Dots and one other community-based “violence interrupter” site to adversely impact violence.

“It’s a significant piece of our total model that is really missing right now,” he said.

Abdur-Rahman doesn’t have enough data on shootings and other crimes yet to show the impact. The city is waiting to compare last fiscal year to this one, which won’t finish until the end of June.

According to data from the LMPD’s website, the number of homicides so far  this fiscal year in Louisville’s are equal to last year’s for the same time period, 10, in the first and second police divisions where the Office for Safe and Healthy Neighborhoods was concentrating its violence interrupter efforts.

Abdur-Rahman said that he couldn’t comment on whether No More Red Dots’ current operations could help the city, as he hasn’t kept up with what they’re doing. But, he said that data-driven violence prevention programs in Louisville are key.

The best way to reduce violence, he said, would be to work with the people doing the most damage.

With the budget cuts, No More Red Dots’ employee (now volunteer) numbers aren’t the only aspect of the program to be impacted.

The nonprofit also lost its Peace League, a basketball program meant to bring rival kids together. And, Woods had to give up No More Red Dots’ Portland headquarters and Shawnee location. Luckily, someone else offered the group a free spot in Portland.

The city, too, has violence prevention efforts that are either starting or growing.

“If you think about this spectrum of violence prevention, from youth all the way to folks who have been involved in the legal system and are coming back into the community, that is the work that the Office for Safe and Healthy Neighborhoods has been doing,” Abdur-Rahman said. “We lost a piece of it when the council defunded the violence interruption work, and that’s an important piece, that’s a big part of what can really help our city move the needle, but there are other pieces still moving.”

Its Cure Violence program, which No More Red Dots was a part of, isn’t completely dead. The Office for Safe and Healthy Neighborhoods still maintains its hospital site, where employees counsel shooting and stabbing victims.

The city is working on four other programs, too:

— an increase in clinical, trauma-response services for 400 families in West and South Louisville, as well as more trauma-response training for community partners who work with people who have experienced violence (funded by a $5 million grant from the Substance Abuse and Mental Health Services Administration)

No More Red Dots, meanwhile, is looking for other funding. Contributors don’t have to fund its street team — they can devote their money to one of the nonprofit’s other programs, Woods said.

Currently, the group has no budget. To stay functioning and to keep its current programs, Woods said, No More Red Dots needs $250,000. It would be fully funded at $500,000. These are lean times, but Woods has experienced it all before.

“We started it out with it being a struggle 30 years ago, so this is back to coming out of the trunk, if you will,” he said. •