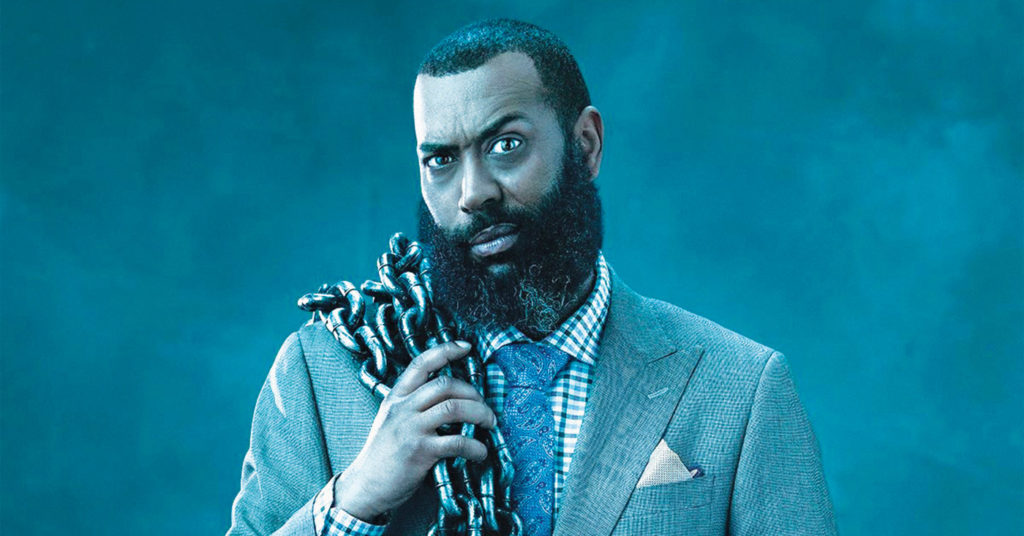 Go to the Define American Summit at The Galt House on Thursday, Oct. 10-13 for workshops, plenaries, “difficult conversations” and hands-on training with “media makers, new Americans, activists, students, religious leaders, and creative influencers from across the political spectrum to fight for more accurate media narratives in their local communities.” But when the serious issues get too, well… serious, hit the the Define American Comedy Show at Mercury Ballroom, presented by Comedy Central. The show features comedians Felonious Munk, Zahra Noorbakhsh, Aparna Nancherla, Atsuko Okatsuka and Nikita T. Hamilton. Munk took time to chat with us about Ethiopian parents, life and even death.

LEO: Tell us about the Define American Comedy show.
Felonious Munk: This show is just to offer some light to the weekend. After you’ve spent all day in panels discussing this heavy stuff, you just need a good laugh. While we’re all ethnically diverse, our comedy is not about that. It’s about life. I’m a dad. I have a wife. If anything, we’ll show across all of our varied cultures how universally normal all of our lives are. Hopefully, culture can eventually bond somewhere around that.

Growing up between New York and Ethiopia had to be a pretty drastic culture shock.
It’s not as different as people would think it is. My parents are both Ethiopian but actually met here. My mom told me I wasn’t an anchor baby. It’s just this is where she met dad, and this is where I fell out. Things are a little more relaxed in Ethiopia. We’re not constantly competing like here in America. Who’s got the best grades? Who’s the better athlete? Who’s best? This or that? In Ethiopia, we’re a little more cooperative.

It’s interesting that you can have both outside and inside perspective on two cultures.
Yeah. I think the biggest misconception in America is that everyone in Ethiopia is starving. I don’t recall that. Of course, kids have a warped view. I know a lot of people who grew up in poverty but didn’t know they were in poverty at the time. I never felt like I didn’t have things. I felt like some things just weren’t that important. I didn’t need the new Jordans or game system. I just went and played soccer with my friends in the front yard. In New York, it was like now I have to go do something. I have to go be famous, or rich, or whatever. Not that either culture is negative. I just think America puts a premium on trying to accomplish, which has made this country great in a lot of ways. But I think it has made it lose that friendly, familiar connection in a lot of ways, as well.

Do you ever think about how you would like your epitaph to read?
Yeah, I would hope it’s written legibly. [Laughs.] I tell my wife, ‘I’m not going to be here. I don’t care.’ We like to think we’re going to live on after we’re gone. We don’t. The number of people who actually leave behind a legacy is like seven. Not 7%, but like seven people. Historically, think of all of the people that we know throughout history, and think about how many other people were alive during their era that we don’t know of. So, I tell my wife, ‘I don’t care what you do for my funeral, I won’t be there. Casket, ashtray — I don’t care.’ I guess I would hope people would say, ‘He was sincere and thoughtful, both as a comic and as a person.’ If I do those two things, I will be successful. •