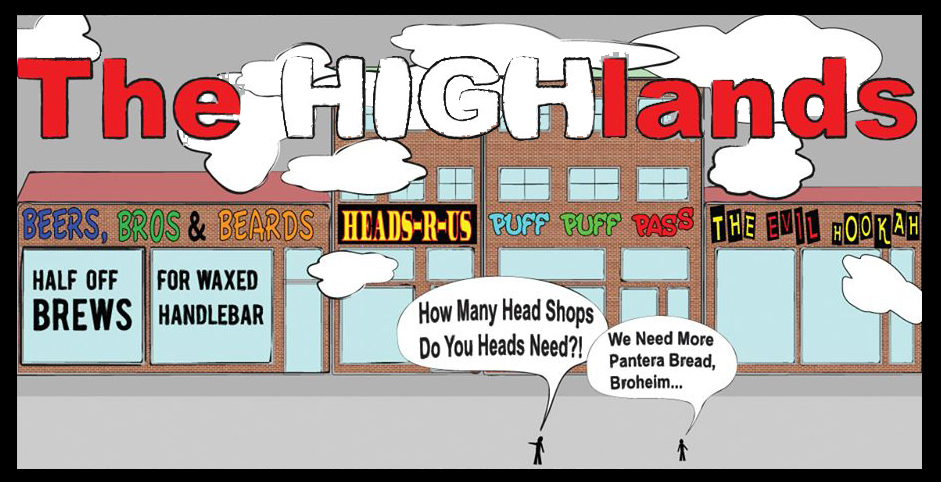 Many readers who responded sounded like Bradley Neil Moser.

“I lived there for years and the decline is evident,” he said in a Facebook comment. “Cool local record shops and retail gone in place of chain restaurants and vacancies. The panhandlers are awful and aggressive. Litter everywhere. It needs real solutions fast.”

“I love The Highlands and see tree planting initiatives, Cherokee Park expansion, farmers markets, festivals and a strong community that will keep our strip bustling for years to come,” said Mo Imam, who said that he has lived and owned businesses on Bardstown Road since the mid ‘90s. “There’s always room for improvement but it’s not all doom and gloom like some say.”

Another commenter, Michael Barnett, blamed the latest handwringing about Bardstown Road on residents with high expectations. “If there’s any problem it is that rich yuppies have moved in and are now using crap like this as an excuse to rid the neighborhood of its eclectic culture, which was what they moved there to enjoy in the first place,” he said.

LEO talked to two Bardstown Road business owners who also felt that the road is better off than others have painted it, among them Metro Councilman Brandon Coan. One was Dallas McGarity, who has owned The Fat Lamb restaurant for almost three years and lived in the neighborhood for 15 years. The other was Todd Brashear, the former owner of one of the most pined-after closed Bardstown businesses, Wild and Woolly Video, and the current entrepreneur behind Wild and Woolly Pilates, also on Bardstown Road.

“I don’t feel like it’s a threatening place to be nor do I feel like, ‘Wow, this street has really seen better days,’” said Brashear, whose total time owning businesses on Bardstown Road adds up to 20 years.

Coan, whose District 8 includes The Highlands and Bardstown Road, was, arguably, the first person to kick off the public debate about the commercial corridor’s decline (or lack thereof), when he issued a dramatic newsletter to constituents on Sept. 11. (A Facebook post from Derby City Chop Shop about their increasing problems with a troublesome next-door property could also be given that credit).

“Bardstown Road is hurting,” Coan declared, saying that “The Doomsday Clock” was at “two minutes to midnight.” (Note: Coan told LEO he was cheekily referencing the actual reading on the official Doomsday Clock, a scientific measure of how close humanity is to extinction).

Coan described in the newsletter how he believes Bardstown Road is in decline, citing a hostile environment for pedestrians and bicyclists, disappearing local businesses, “social ills” and not enough police and code enforcement.

He later told LEO he’s heard constituents making the same complaints since he began running for his council seat in 2016. But, he dated the issue back to the late ‘90s, when Louisville followed other cities in the nation by investing in downtown areas by building entertainment districts, hotels and sports arenas — leaving commercial corridors such as Bardstown Road behind. Suburbs were already thriving as more people moved there, underwritten by cities that did not care greatly about land use policies, Coan said. Accordingly, thriving neighborhood shopping districts such as Bardstown Road were effectively turned into highways for residents as they traveled back and forth from home to work. That, Coan said, is part of the reason why traffic is so fast on Bardstown Road.

As for fewer local businesses, Coan blames e-commerce. He cited the replacement of ear X-tacy by Panera Bread as an example of an independent shop overtaken by a chain. He also sees Walgreens and CVS pharmacies in spots that used to have multiple, specialized retailers.

Coan said that there are people who come to The Highlands to panhandle or to find, sell or use drugs, but that it’s not necessarily worse near Bardstown Road than it is in other areas of the city.

McGarity and Brashear agree that Bardstown Road has always been rough around the edges — and that it’s part of the corridor’s charm.

“Honestly, I think there is a slight decline, but I think it’s always been around,” said McGarity. “I think the Highlands has always had a little bit of sketch to it, and that’s what makes it weird and fun and cool and why there’s so many bars on the street and that kind of thing.”

McGarity said that code enforcement has long been a problem and that public drug use has seemed to have actually declined since he opened his business. McGarity said what seems worse about Bardstown Road is the amount of trash, number of speeding cars and the behavior of some people who hang out at intersections, such as the corner of Bardstown Road and Grinstead Drive where his restaurant is located.

People have always hung out there, but McGariety said that he has recently noticed them panhandling, attempting to talk to people who don’t want to be bothered and getting into fights.

“It’s like, that should never be happening,” he said in reference to the altercations.

Brashear said Bardstown Road has always had problems, including crime and fast traffic. He agreed that the public impact of drug use has seemed to have declined in recent years since the peak of the opioid crisis.

The reason that businesses are leaving, Brashear also attributed to the rise of e-commerce. His video store was overtaken by streaming video. But he also said he thinks some people might be blinded by their nostalgia for certain former businesses.

“If you think a place is going to stay the same just because you liked it that way, you’re crazy,” he said. “I mean, things always change. Nothing ever stays the way it is.”

Brashear thinks perception might be a bigger issue for residents. They see growing commercial districts such as Butchertown and NuLu and think, ‘Why can’t Bardstown Road be like that?’ Or, they see more of the bad things happening in the neighborhood because of social media, he said.“It just feeds into the hysteria a little bit, I think.”

Coan told LEO that he did not write his newsletter to only outline the decline of Bardstown Road, but, rather, to encourage residents to attend a Highland Commerce Guild event, so they could make sure the mayor heard their concerns.

“I’m extremely optimistic about the future of Bardstown Road,” Coan said. “Because, long-term we have all those assets, the great neighborhoods, the parks, that you know, when we fix what’s wrong now, I have no doubt it will be the premier commercial corridor in the city again.”

McGarity attended the meeting and said the message he heard was that property owners should invest in the neighborhood themselves.

The city has had to generalize the job of one of its economic development employees who previously was focused on particular areas of the city including Bardstown Road. Beefed up street patrols are also not a possibility, Wiederwohl said.

What The City Can Do

Coan wants the city to help contribute to $60,000 for roadway changes. The Bardstown Road Safety Study, completed in 2018, recommended that Bardstown Road be reduced to two driving lines at all times, with one in each direction. Before that can happen, another study is needed to see how that change would affect neighboring city streets.

At the Commerce Guild meeting, city officials also mentioned the possibility of enacting a code enforcement “sweep” of the neighborhood, with code enforcement officers going out en masse on one day to cite building owners for property violations. (Property owners would be notified beforehand).

Coan said that he’d like for that sweep to become a continuing effort, not a one-day initiative.

To help ensure the integrity of Bardstown Road’s business scene, Wiederwohl said zoning enforcement would continue to make sure that businesses aren’t operating outside of uses authorized by the land development code.

Wierderwohl also endorsed one of Coan’s previous ideas to create a business improvement district, which would create an extra tax for neighborhood properties that would fund a street cleaning team.

Rather than wait, Bardstown Road businesses are organizing to create a better corridor. McGarity and “a ton” of other business owners are planning to make a private Facebook page to discuss how they can help the road, he said.

McGarity thinks that one of the reasons why Highlands residents believe the neighborhood is in decline is they see trash and assume that Bardstown Road’s character is trashy, too. Every day, he walks around the building and cleans up the litter he sees.

“That’s just part of owning a small business is making sure the sidewalk’s clean and making sure the business looks inviting to people. That’s huge already,” he said. “But if everyone did that, it would be so much better, you know?” •