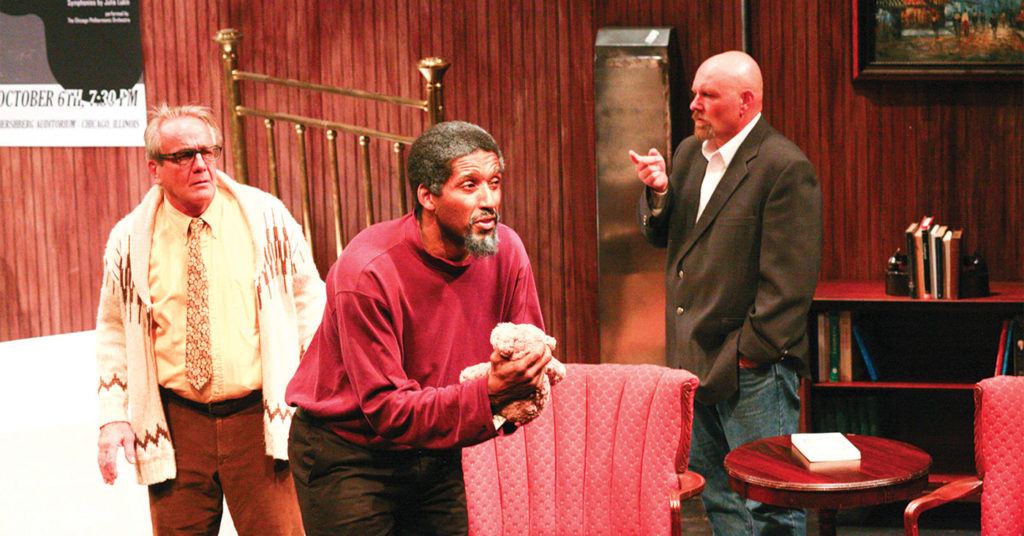 In a season of spooky plays, The Liminal Playhouse offers up “Haunting Julia,” a play by British playwright Alan Ayckbourn about the people left behind 12 years after the death of a young musical composer, set in her old student-residence-turned museum. It’s a ghost story to be certain, but true to The Liminal Playhouse’s form, this Halloween play is less a flashy piece about the horror of the unknown and more a thoughtful character-driven story about unanswered questions and letting go.

At its most chilling, “Haunting Julia” is creepy rather than scary, but that’s not to say the play lacked goosebump-inducing moments. Recordings that seem to feature the laughing or pleading voice of Julia’s ghost (Melinda Beck) gave chills, and special effects in the climactic moment brought gasps throughout the audience… and left us pondering the mechanics of them as we left. Even when the show isn’t overtly spooky, it felt tense. The characters spend much of the show waiting for something, not sure what it will be or when it will happen. I felt the same immersed anxiety, especially in the second act.

But although Julia’s father, Joe (Tom Luce) finds himself pondering, even 12 years later, what could have driven his daughter to suicide, the show isn’t really about the ghost or her feelings. Instead, it’s about Joe and two friends from her university days: Andy (Jason M. Jones) who had been lovingly devoted to her until almost the end and Ken (Brian West), the janitor whose family had a quiet friendship with Julia. Overwhelmingly, the main conflict is Joe’s refusal to let go of Julia. But Andy and Ken have their own secrets about her — especially about her last night alive. Tensions run high between the three men, each haunted by their different versions of Julia.

The human element of the play is strengthened by pieces that Director Tony Prince brought in that were personal to him. In the artistic director’s note, he references “my late father’s desk” as the desk on which Julia penned her compositions and “my late sister’s difficult and chaotic spirit” in the character of Julia herself.

Julia was defined by her music, a fact that apparently exasperated the living woman, so it’s appropriate that over the course of the show, we never see the actual ghost. Instead, we hear her laughing, crying or whispering, especially in outtakes of the recording designed to introduce her bedroom for the museum exhibit. At other points, she’s “heard” playing the piano in a room that no longer exists. As Ken explains, it matters little that the piano and room no longer exist, because neither does Julia, so they likely still exist for her. Even more unnerving is the idea he repeats throughout the ordeal, “We probably seem like ghosts to her.” •

The playwright Susan Miller has an enormous list of theater credits — including her Obie Award-winning, autobiographical, one-woman play “My Left Breast,” which premiered at Actors Theatre of Louisville during the 1994 Humana Festival of New American Plays.

Miller also has an extensive list of TV credits including a stint as story editor for the late ‘80s, early ‘90s series “Thirtysomething.”

“Thirtysomething” — which racked up a slew of Emmy Awards for its depiction of baby boomers transitioning into adulthood — is now 30 years old — so its characters would now be sixtysomething.

And sixtysomething is the age of the four women at the center of Miller’s 2017 play “20th Century Blues,” which opened last weekend in an Eve Theatre Co. production directed by Scout Larken.

This is in no way a sequel, and these four women aren’t spin-offs from the series. But, in its best moments, the play seems deeply-rooted in the closely-observed experience of a writer recounting lived experiences.

Forty years ago, when these women were twentysomething radicals, they spent a night in lockup. To capture the moment, Danny (Susan McNeese Lynch) took a group photo. That photo turned into an annual tradition, and 40 years later Danny, now a successful photographer, plans to display the collection in an exhibit at MOMA, and has gathered the group for one last photo. It turns out, though, that Danny needs signed releases from her friends, Gabby (Karole Spangler), a death-obsessed veterinarian; Mac (Hazel Bartlett), a gruff, witty journalist who is being downsized; and Sil (Michelle Chalmers), a struggling Realtor whose planned cosmetic surgery triggers some witty shaming from her peers.

Since these are group photos, Gabby needs everyone’s agreement — and though these four women have been friends for 40 years, they’re not all on board. In Miller’s witty and poignant script, the ensuing clash brings to the surface rich troves of shared stories and carefully concealed secrets, deep loyalties and long-nursed grudges — as well as immediate crises. These are women who have lived from the ‘60s to this political moment. They’re bold, uninhibited and fearlessly willing to talk about anything — including aging and death.

A framing device in the script reveals that Danny’s son Simon (Ian Weber) is adopted and that her mother, Bess, (Gilmer McCormick Reinhardt) is in assisted living and has early-stage dementia. Although some facets of the script struck me as a bit contrived (including a prelude and postlude in which Danny delivers parts of a TED talk), Larken elicits strong, candid, emotionally powerful performances from the cast, and Kathryn Spivey Deckard’s set is superb.
—Marty Rosen •