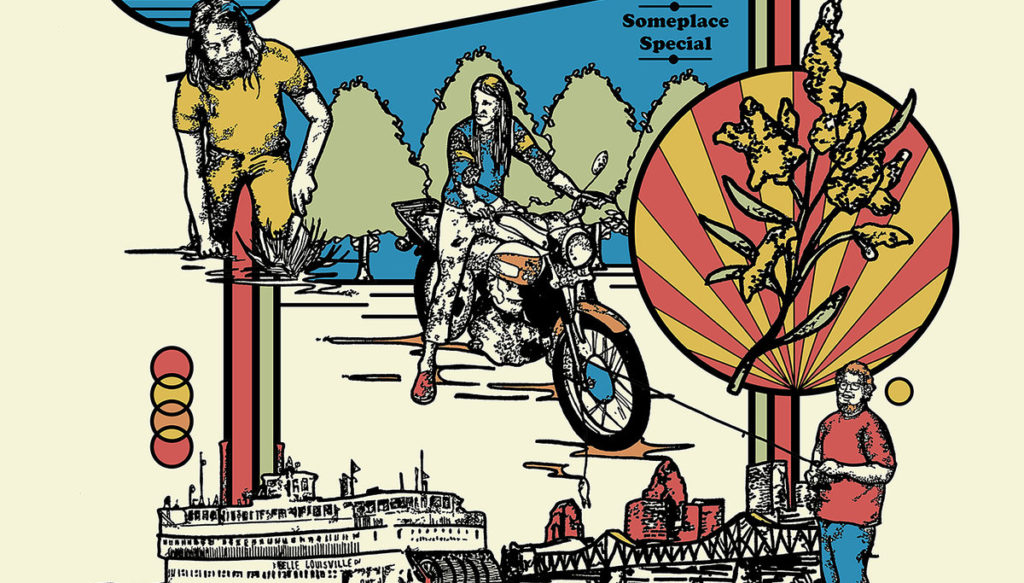 A detail of Boa's album art.

Cat Casual and the Final Word — ‘Asphalt’
The newest from Cat Casual features singer/guitarist William Benton centered around a deadly bass and drum groove — one that gives the guitar and keys room to explore. And that’s what Benton and his Final Word do so well — mine each riff to the core, exposing every musical possibility along the way. The bass provides the central hook, with the other members of the band working in service to that rhythm, supplementing already solid material. The vocals contribute inevitable darkness, one punctuated by moments of rage and the lowest of lows. Benton’s guitar work shimmers as a picture of coiled restraint, each note given space to breath, every flourish a light touch.

Waxeater — ‘I Love Your Body, Larry’
Waxeater carries the noise-rock torch with a sardonic charm. The band are predicated on the heft of their riffage, and they make a big noise. The thumping and plodding bass lines are matched with chunking, chiming guitars for the kind of polyrhythms that were written off as “angular” during the heydays of math rock. The drums are monolithic and fierce — you can imagine the drummer playing with baseball bats and pounding the shit out of their instrument, beating it like it owed him blood money. The vocals are barked and sarcastic, a hallmark of the genre, paying homage to bands like Shellac or Mule along the way. I’m not sure who Larry is, but goddammit, I think I love their body too, after hearing this kind of energy dedicated to the subject.

Twin Limb — ‘Water’
After being dormant for a few years now, Twin Limb wakes from their quiet slumber, offering up the dreamy indie pop of “Water.” With their newest venture, the band has produced something truly transcendent, with instrumentation blurring into a colorful smear of sound, blending into one another. You can pick out guitars, pianos and more, all made into a swirling mass of sonic beauty with no edges in sight. A measured drum beat keeps the meter here, methodically plotting a work of extraordinary melancholia. Per usual, the vocals are front and center, uniting in a delightful and imminently charming harmony.

Boa — ‘Jawbone’
This a track that comes out of the gate swinging, only to drop to a mellow gait that sees the band digging into the psychedelia that has always informed their sound. There is an untamed wildness to the composition of “Jawbone,” manifested by its inherent unpredictability. Each passage leads to something wondrous and unique, although not so off the beaten path that it’s bewildering or a novelty. There is a whimsy to the lyrics about a literal jawbone smoking a Marlboro cigarette that add to the magic evoked in the chorus. This is a weird and wonderful world that the band has created, one that blends the blues funk of CCR with the dramatic flare of Pink Floyd at their most induced.

Base  — ‘Sweaty Psalms’
The work of producer and emcee William Ragland, Base favors gritty and grimy compositions, which skew as dank as they are dark. It’s confrontational work, a brand of hip-hop designed equally to challenge and groove all at once. On “Sweaty Psalms,” he eschews the chopped and screwed codeine vocal slurs that defined his earlier work, focusing on a hyper compressed bass and drum track. As such, there is liberal use of the decimator, an effect that creates distortion by aggressively attacking granular particles of sound. That means that the music sounds as if it set the mixer on fire when recorded, hot and pulsating beats that scorch the Earth behind them.

Jaxon Lee Swain — ‘Surrender’
Returning with another welcome serving of ‘50s-influenced rockabilly, Jaxon Lee Swain is all swagger and boozy grace. There is a doo-wop swing here, but while Swain recalls the music of the Greatest Generation, it’s concurrently timeless, updated here both through the sly, punk sneer in his voice and the soft synth work that serves as a sonic pad underneath everything else. This is dreamy music about letting love in and the composition manages to communicate that sweetness without ever coming off as saccharine. When Swain pleads with the audience to “come on,” to surrender to that same love, it’s uncertain if it’s a grand romantic gesture, or a platonic call for mutual acceptance. It’s that dichotomy that imbues his work as something truly resplendent and lovely.