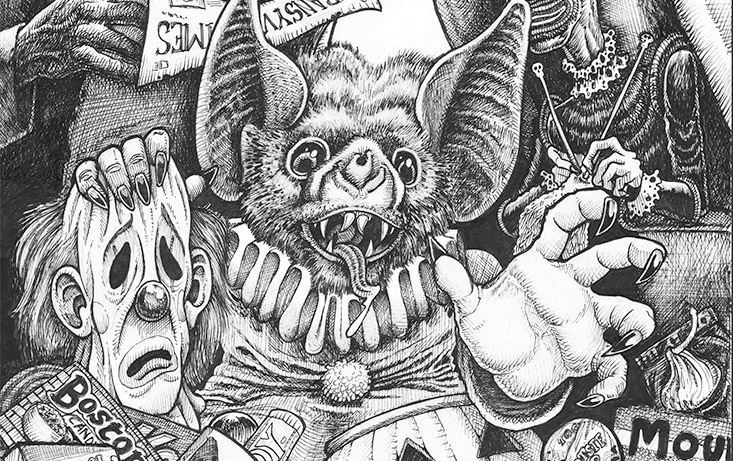 A detail of an illustration by Phil Longmeier that will be in the Louisville Gore Club Halloween Art Show.

Family History Fair
Filson Historical Society
Free  |  4-6:30 p.m.
Curious about your family’s background? All the resources you need to uncover your past will be in one place at the Filson Historical Society’s Family History Fair. The Louisville and Kentucky Genealogical societies will be there, as well as UofL Archives & Special Collections, the SAR Genealogical Research Library and Joy Neighbors, the author of “The Family Tree Cemetery Field Guide.” They’ll try to answer your questions and help you plan your next research steps. The Filson’s library and galleries also will be open for tours.

Annual Louisville Gore Club Halloween Art Show
Seidenfaden’s
Free  |  7 p.m.
This is the last day for Louisville Gore Club’s Halloween art show, featuring 20 artists and led by master monster creator Ryan Case. All pieces for sale will channel the spirit of our spookiest holiday. (They’ll be there on Monday, too).

‘TIGER’ at 21c
21c Museum Hotel
Free  |  7:30-9:30 p.m.
“TIGER” is a traveling live-cinema performance described as part travelogue, seance, Parisian salon — part Spalding Gray, part Laurie Anderson. Storyteller Deke Weaver is the artist, and TIGER is a part of his larger project “The Unreliable Bestiary,” featuring a different performance for each letter of the alphabet, represented by one animal. His past performances, including “ELEPHANT” and “WOLF” have showcased storytelling elements, video and installations. The animals, according to the project’s website, show how everything is connected: “Our fantasies, assumptions, and cultural mythologies literally shape the land. Animals and their stories are embedded in our environmental, economic, political, and judicial systems, the systems throughly enmeshed with each other.”

Phases III – Electroacoustic Open Mic
Kaiju
Free  |  9 p.m.-midnight
Songs are “highly discouraged” at this open mic. Instead, organizers want you to prepare experimental music or just improv — preferably something electric, although electro-acoustic is also welcome. Performances are first come, first serve, so get there early at 8 p.m. to sign up if you want to play. Music starts at 9.

Half Price Books Kentucky Clearance Sale
Kentucky Expo Center
Free admission ($10 parking)  |  10 a.m.-6 p.m.
If you think Half Price Books is already bursting with cheap titles, you should check out their annual clearance sale. There will be hundreds of thousands of books, music, video games and more, and everything is $2 or less. It’s free to get in, but $10 to park on Expo grounds. The first 100 shoppers receive a free tote bag.

Louisville’s International Festival of Film
Various locations
$5 per movie  |  10 a.m.-6 p.m.
Louisville’s International Festival of Film, now in its 11th year, features movies made around the world, including Kentucky films. On Friday, you can pick from over 50 to watch, spread across three venues: The Muhammad Ali Center, the Kentucky Science Center and downtown Louisville’s Holiday Inn Express. Some highlights are “Dark Harbor” a film from the United States at the Muhammad Ali Center at 3:41 p.m., about a pregnant woman close to her due date who has to return to Maine following the death of her father — whose secrets start coming for her — and “La Loche,” at the Kentucky Science Center at 4:30 p.m., a Canadian documentary about students finding healing in the wilderness after a school shooting in a remote, aboriginal community. It’s $5 for a single movie ticket, but you can also buy day passes for $15 and weekend passes for $25.

25th Annual Belknap Fall Festival
Douglass Loop
Free  |  6 p.m.
Join 15,000 others in attending the Belknap Fall Festival, which has everything you could want in an autumn fest: food, beer and wine, live music, over 100 local artists and a family fun zone. Catch Madmen Across the Water and E L Faux playing on Friday.