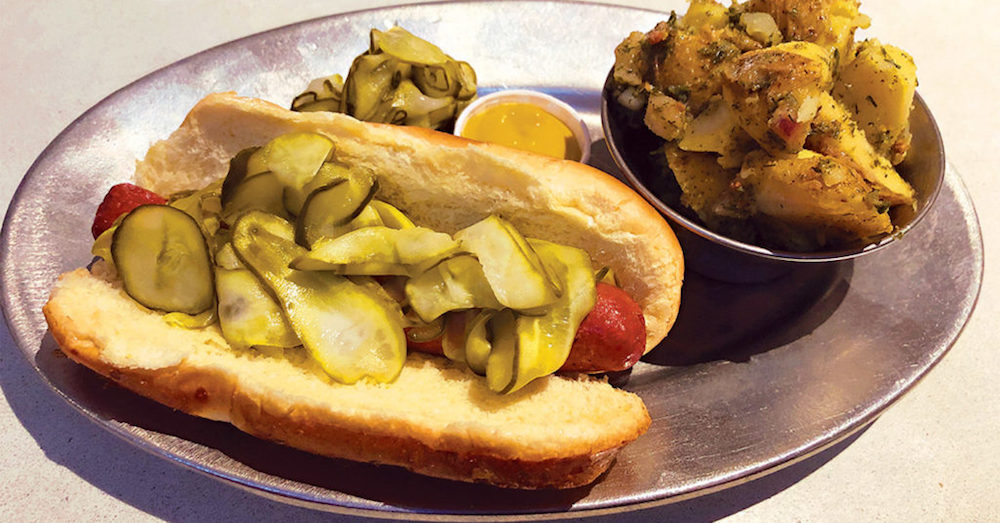 The Hall on Washington St.’s all-beef classic frankfurter is finely ground and flavorful.

Many years ago, we were wandering around Europe on a Eurail Pass, when one of us said, “Let’s go to Munich,” just on a whim. That’s how I found out what a beer hall is and Oktoberfest, too.

Ah, memories. Memories of friendly Germans lined up along long communal tables, drinking excellent beer out of sturdy steins, chowing down on delicious sausages and singing.

Now, we have The Hall on Washington St., and it’s something like that too, but with a Louisville twist, no singing and a strong sense of history thanks to its location in the walkout basement on the Washington Street side of Whiskey Row.

The 1870 facility really does resemble a German Bierstube, with its long, narrow room held up by foot-square wooden pillars and massive beams and its exposed brick walls and refinished old hardwood floors. Most of the seating is at communal high-top tables, beer hall style, and at a long bar that occupies the length of the room.

Speaking of beer, there’s plenty of it. A dozen draft beers and some three dozen canned and bottled brews offer a mix of German, craft beers and industrial domestics. Draft beers are available in four sizes, from full liter steins ($10.50 to $15) down to 7-ounce lunch portions ($1.50-$3). Cans and bottles are $3 to $8.50. There’s also a short wine and spirits list, featuring cocktails and, ach du lieber, several beer-based cocktails.

The menu is German with a touch of Louisville heritage. You can build your own charcuterie board from about five meats and seven cheeses priced à la carte at $5 or $6, or order a composed board at $16 for two or three to share or $25 for a group of five or six. Eight appetizers, described as sharable snacks, range from $4 (for a pretzel and mustard) to $9 (for fried cheese curds). Nine salads, sandwiches and fries range from $8 (for sloppy joe fries with beer cheese) to $12 (for a chopped salad with three kinds of meat).

Wursts — German-style sausages — dominate the center of the menu and require some picking and choosing. First, select your wurst from a list of eight sausages that range in price from $4 (for an all-beef frank) to $9 (for a plant-based Beyond Bratwurst). Then, choose your vehicle: Put it in a bun, take it on sliced bread or opt for German currywurst style. Finally, add your toppings from a list of eight options. Or, load up on a $19 wurst platter with three sausages, red cabbage, sauerkraut, bread and shaved pickle.

Got a hunger that wurst won’t fill? Five entrées from the grill range from $12 (for chicken schnitzel) to $16 (for steak frites).

We arrived hungry, but a pair of potato pancakes ($6) soon solved that. Coarsely grated potatoes were formed into flattened rounds and deep-fried dark golden brown, sizzling on the outside and creamy within. Tubs of sour cream and sweet-tart lingonberry jelly made them even more fetching.

Ordering the roasted asparagus ($5, five fat spears) seemed virtuous, but the drizzle of butter and rich, creamy Parmesan-lemon sauce kept it from being too much so.

We pondered the grill entrées but decided to go for the wurst. The all-beef frankfurter ($4) was slender but juicy and flavorful. It was plugged into a standard white hot dog bun and covered with shaved pickles, mandolin-sliced into crisp, paper-thin disks, with yellow ballpark mustard on the side. A dish of potato salad was made from small creamer potatoes cut in chunks, dressed with oil, vinegar and minced parsley. Sauerkraut was standard-issue stuff, not that there’s anything wrong with that.

Because I’m always experimenting with fake meat, I went with the Beyond Bratwurst. On its own, this dense, herb-scented sausage might (or might not) betray its plant-based origin in a comparative tasting. But in the bold-flavored setting of German currywurst with its spicy tamarind and curry sauce, any flavor differences disappear. It came with slices of excellent toasted baguette drizzled with curry sauce, and a generous pile of shaved pickles.

I didn’t care for beer so early in the day, but I’d love to come back for a stein of Warsteiner Dunkel and a hearty German dinner sometime. With good, fresh iced tea ($2.50), our lunch came to $33.39, plus an $8 tip for our cordial server, Jaiana. •

Noise level: Sound in this long, low room will vary with the crowd. With only a few tables in use at a Saturday lunch, conversation was easy. Come back on a busy weekend evening, you may have a tougher time. (Average sound was 63 decibels, the level of quiet conversation, with occasional spikes to 79 decibels, approaching the sound of a vacuum cleaner.)

Accessibility: The restaurant’s entrance and dining areas are flat and accessible to wheelchairs, but most seating is at high tables or bar stools. Only two tables at the back of the room are suited for wheelchair seating. The five individual unisex restrooms are models of accessibility, with hands-free toilet flush, sink and air dryer and nothing out of reach for a seated individual.