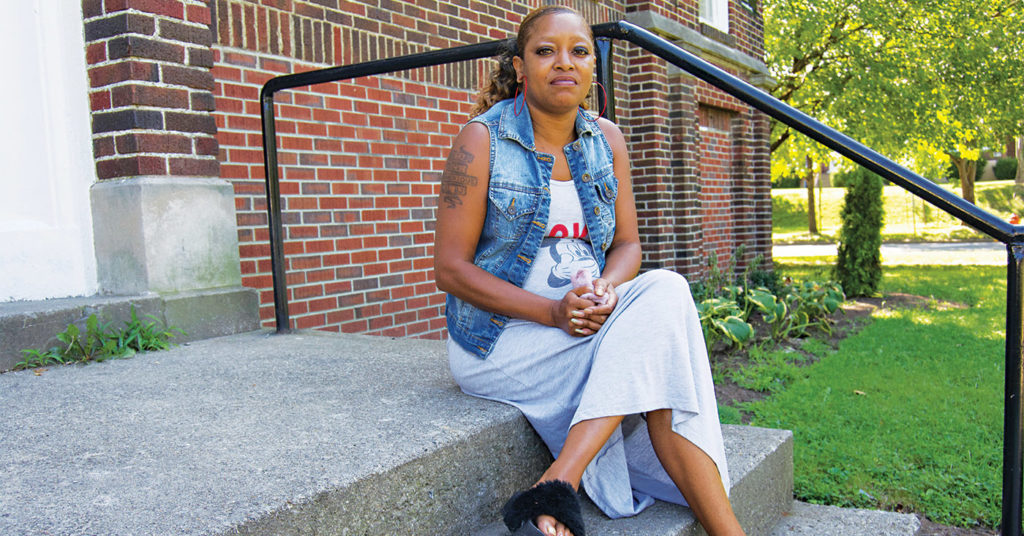 “I’ve been in The West End since 2006, and I haven’t had any problems. I’ve been down here a while, and I like it. I’m a suburb kid from out Westport Road. I was a little naive growing up out there. I didn’t know much about the buses and stuff back then. I didn’t learn about that stuff until I was in high school. Then, I started coming out and running with my friends. I like it. It’s been good for me. There’s a lot of shit that goes on, but if you think about it, it goes on everywhere. When you put it in context, they make it sound bad when it comes from down here. I’m right across the street from the park, and I’m in a good spot.

There’s also not enough for kids to do out here. If you don’t catch these kids early, they’re in the streets, and once they’re in the streets, they’re gone. It’s hard to turn them back around once they’re out there. I think the idea is to teach them before they get out there. The West End School for boys is good because they need it more than anybody. They need one for girls, too.

They also need to put some things back in the schools. Like, what happened to home ec? Why can’t these kids make a meal? You can’t feed your kids noodles or microwave meals for life. These kids can’t cook or clean. That’s all the things that I learned in school, that some can learn at home, but they aren’t.

I have breast cancer. In 2013, I found a knot, and I’ve been going back and forth ever since. I’m just trying to be here as long as I can for my kids and grandkids. I just had surgery on the seventh of August, and I’m supposed to be having my final surgery on the 19th of this month. I’ve been through it these last five or six years. I’m here, and I’m fighting to be here. I have five grandbabies, and I want to be here for them. I figured that the name of the game is survival, and that’s with anywhere you go.

When he passed, it affected the community. My son was a good friend. He took care of the people he loved. So many of his friends, their parents, teachers and other people just showed up for him. When you got it like that, it’s a community.

We don’t have a community like we used to. Back then, you could keep an eye on the kids in your neighborhood. You could call out down the street, ‘Ay, is Johnny there? Tell him I said to come home!’ You can’t do that anymore. People aren’t on each other’s side. You can’t protect somebody’s kids from running to the streets because they’ll cuss your ass out. It goes back to the momma and grandmomma not being there. Back in the day, if momma wasn’t there, granny was — no problem. Look at me, I’m a grandmother, and I’m not that old. The dynamics have changed. If you ain’t out there, trying to learn how to do it, you just won’t know it. You’re just picking up as you go along, and that ain’t cool because you’re having kids before you know how to do it.

“It’s nice here. I’ve been here, in Russell, for about two years now. I live next door to that church over there. I don’t attend it, but I do get the word because he puts that big box [speaker] out there for everyone to hear. It’s pretty nice and laid back. I like it. I don’t like that I don’t have a washer and dryer, but other than that, it’s been nice.

I’ve been in The West End all my life. I used to live in the California neighborhood, on Prentice. That’s where I was born and raised. Coming up was good — you know that old school stuff. It wasn’t like it is now — it’s crazy now. There’s no hopscotch, hide and seek or jump rope. That was good stuff. Maybe, we just need to do it with the kids. Sometimes, we’re not taking the time out to do it with them. I had it good, growing up. I guess I’m old-timey.

Living here has been positive. Growing up in The West End, I learned how to respect people. We got along with each other and because of that, it’s made me a good person. Now, it seems like people can be so hateful toward one another. We just need to love one another. It always seems like we don’t like each other. We just kill each other, and it’s grimy.

When I lost my mama, it made me grow up. That impacted my life in a big way. I was always with her. She was living with me. People thought that I couldn’t make it on my own but I could. I took care of her, but we took care of each other, but I had to get out on my own. I had to learn how to really be by myself. That was life changing for me. I had to grow up and be a woman. She died in March 2011. That was life changing. It’s a blessing to still have your mom because you’ll miss them every day when they’re gone.

My advice to the world is to be open to everybody’s ideas. You can’t always cut people off. Sometimes, we cut people off for the wrong reasons. You know, you may not like the way they look or sound. Sit down and listen to somebody sometimes. You’ll learn things that you didn’t even know. If we can pick up the kids, things will be better for the people.” •