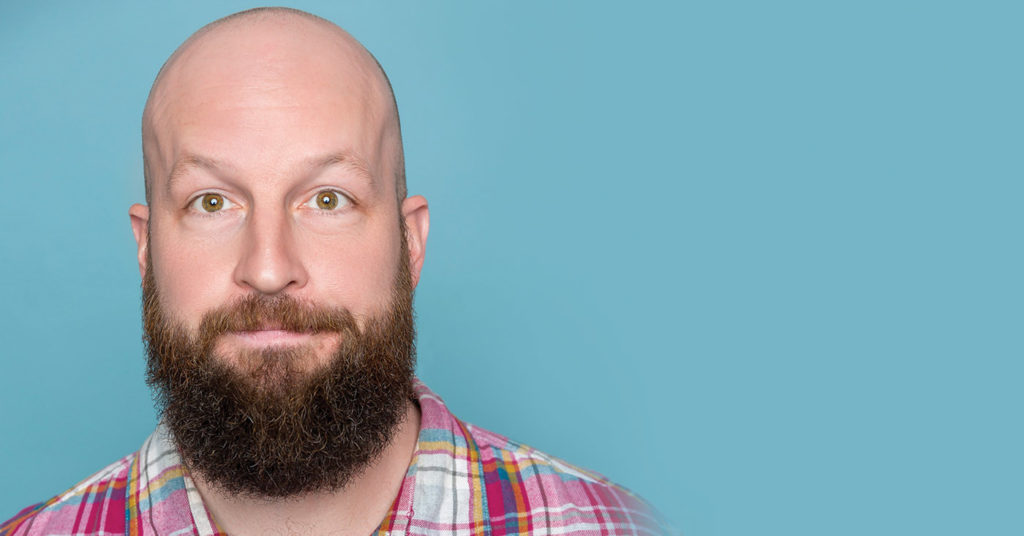 Comedian Gabe Kea is 6 feet 5 inches tall. “It’s not all it’s cracked up to be,” he said of his height. “I have to change every light bulb in every room, everywhere I go.” He’s been bringing laughter to audiences in clubs, colleges and festivals across the country for the better part of two decades. Kea took time to talk with us about drinking, fatherhood and being (sort of) Canadian. This week, he headlines The Caravan.

LEO: This is not your first time in Louisville. What do expect when you come through?
Gabe Kea: The drinking. The late drinking that happens there. I always get slammed with that the first night I get into town, and the rest of my weekend is a hangover. Your bars stay open forever. I’ll have a really hot Thursday show, but Friday is puke and rally. Also, I ran into a guy who had an Abraham Lincoln T-shirt. I like to wear Abraham Lincoln T-shirts onstage, so I literally shirt swapped with a guy there.

You’re a self-proclaimed beer enthusiast. Do you switch to bourbon here?
My, yes. That’s what gets me in trouble. Most of the time, that first night, I’ve been driving all day, probably forgot to eat — I get to the club, and someone makes me try some bourbon. Then, I can’t stop. I can’t handle it, I’m not from Kentucky. You all are unreal.

You’re 6 feet 5 inches. Was being tall awkward growing up?
Uh, it’s still awkward. It’s not all it’s cracked up to be. I have to change every light bulb in every room, everywhere I go. There’s no such thing as ‘Tall Man’s Syndrome’ is there? Like, people have ‘Small Man’s Syndrome.’ A lot of comics are short anyway, so it gets awkward when I have to bring this little guy onto the stage after me. Plus, I’m bald, too. Nobody brings that up. It’s like the tallness is the comfortable thing they can bring up. In college, they called me ‘Stork’ because I was so tall and thin. One day, someone was like, ‘Is it because you give all the girls babies?’ I was like, ‘I wish, but I’ll let you keep thinking it.’

Do you have any children?
Yes, I have a 4-year-old daughter, who writes all of my material now. It’s so easy when you become a father — they just say the words, and all I have to do is repeat them into a microphone. She named her tadpoles Fart and Skooter. When I was a kid, fart was the F-word. We weren’t allowed to say it. We had to call them poofs. Then, I named my tadpoles Queef and Cooter because daddy’s a comedian, and he isn’t going to be out-grossed by a 4-year-old.

Did becoming a father change your sense of humor?
Oh, my god, yes. Do you remember when Eddie Murphy had kids, and then he went all clean? I did the exact opposite. I used to be a relatively clean comedian. Then, I had my daughter, and I can’t stop talking dirty, which makes absolutely no sense.

As a citizen of the U.S. and Canada, what stereotypes from each do you see in yourself?
As far as Canada goes, I apologize way too much. I’ll hold the door open for one person. Then, I’ll stand there holding it while five other people walk through. I have soap that is made out of maple syrup. I genuinely smell like maple syrup all day long. My sister gave me the soap when I was playing hockey. So, I was showering afterward, standing around with a bunch of naked guys, which is not the best place to start cracking jokes. I was like, ‘Hey guys, I’ve got maple syrup soap. Who wants to play Canadian today?’ I just made it awkward for everyone.

How about American?
I enjoy wearing my pajamas all day long. •