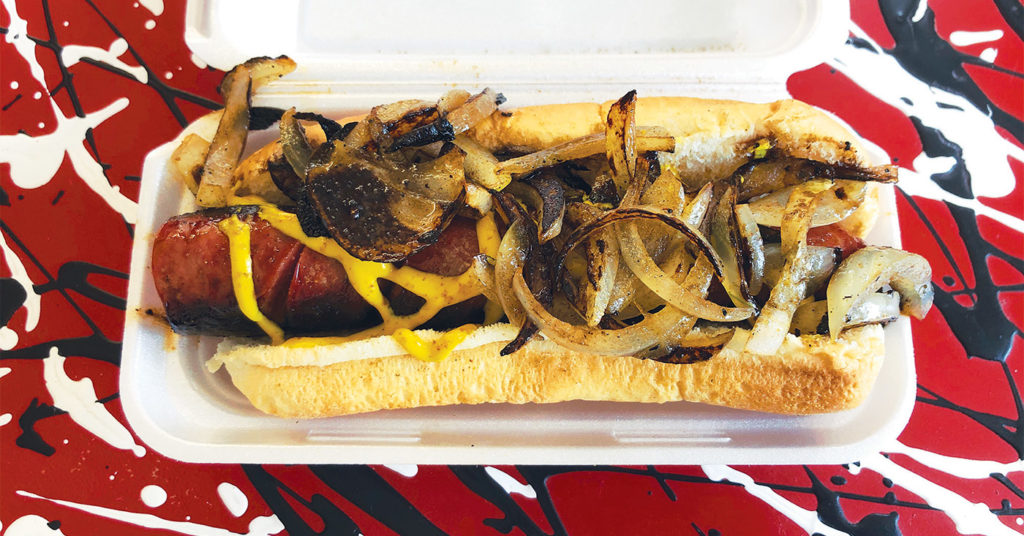 Six Forks recently arrived in a Shelby Park street corner storefront that, in years past, housed Louisville’s only Pakistani restaurant and later a fried chicken and fish shop.

Now, Six Forks owners Troy King and Selena Johnson — who also operate the popular Pollo Gourmet Chicken Joint food truck — have fixed up and redecorated this welcoming place. They’ve added colorful notes with splashes of red, white and pink paint that give the floors and table tops a Jackson Pollock vibe. A long, wooden church pew forms a banquette along a wall.

Place your order with the friendly folks at the front counter, pay and give your name, grab your drink from a big cooler, take a seat and relax.

Speaking of drinks, bottled water is free, and that goes for anyone passing by who’s thirsty. Freshly-made Kool-Aid is $3 (and free on Tuesdays) for a 32-ounce mason jar, your choice of grape or bright-blue Jolly Rancher raspberry. Refills are $2.50, assuming you can glug down a quart and come back for more.

You’re not done yet. Now, choose among 10 free toppings, 11 free sauces and 13 premium toppings (85 cents), allowing something like 13 million possible combinations, from mustard and ketchup to a Dagwood burger loaded with pimento cheese, cheddar, bacon, buffalo ranch and raspberry chipotle barbecue sauce, for example. Or, let the chef do the deciding with any of four chef’s selection burgers ($6.95) including the super-spicy caliente burger or even the adults-only breakfast burger with bourbon-spiked chocolate sauce.

In the mood for something different? Choose between two grilled-chicken sandwiches ($6.95) or the two-layer “double grilled cheese” ($3.95).

A chef’s hand is apparent in side dishes (all $3.95) such as cast iron skillet-roasted green beans, spicy “twisted” corn or potato salad kicked up with Thai spices. Fries come in six variations from $3.50 (for basic herbed fries) to $8.95 (for fries loaded with spicy chicken, bacon, nacho cheese and more).

We loaded up on a dog, a burger and two sides and didn’t have a word of complaint.

The Maxwell Street Polish sausage ($5.95) was thick and beefy as a Polish sausage should be. It had been deeply scored in several places to let the delicious juices run out, with good, dark, char spots from the grill and discreetly drizzled with ballpark mustard. A mass of darkly grilled, sweet, caramelized onions added even more flavor boost. It came on a standard issue, white hot dog bun in a white, polystyrene box.

We took the Beyond Burger ($7.95) option and resisted the temptation to load on a mass of toppings and sauces, opting for simple elegance with a ration of those excellent grilled onions and, to mix things up a bit, a dollop of gently spicy, earthy, Asian-style peanut sauce. In the current competition among fancy faux burgers that taste and even bleed like meat, I’ll give the Impossible Burger a slight edge; but the Beyond Burger is a close runner-up, and this one was grilled just right, with crunchy dark edges and a beefy, juicy center. It came on a good, white, burger bun, lofty and light.

Cast iron-charred green beans ($3.95) were amazing, a side dish that would pass muster in the city’s fanciest eateries. Whole, thin green beans with the ends neatly trimmed had been sautéed in a screeching-hot, black iron skillet until just at the point between crisp and tender— bright green and dotted with sweet charred spots. They’re sprinkled with a fragrant mix of black pepper and spices and topped with Yum Yum sauce, a creamy pale-orange Japanese-American blend of mayo, ketchup and spice.

With free water, a memorable lunch for two came to a thrifty $18.18, plus a 25% tip that I consider mandatory for a tab that cheap. •

Noise level: We had no difficulty communicating across the table at lunch time on a weekday. (Average sound was 73 decibels, the level of normal conversation.)

Accessibility: The restaurant and restrooms are fully accessible to wheelchair users, but those with limited hand and arm motion may have difficulty with hard-to-twist round doorknobs and heavy doors.