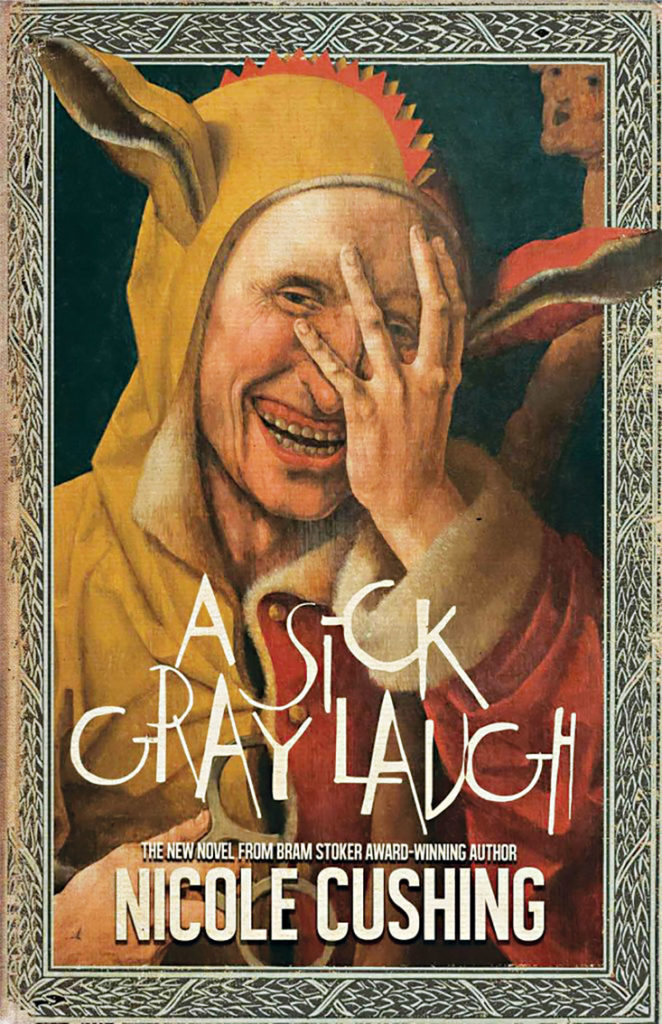 Guaranteed: It’ll be a long time before you see another book like this. All flavors of metafiction are sprouting up these days, but this is unique. If you’re ready to see an author with demonstrated talent for exploring emotional disturbance try for something deeper, this is one to grab.

The “if” caveat is important, though. It doesn’t matter if you enjoyed award-winning “Mr. Suicide” or any of Cushing’s previous volumes. This Kentuckiana author’s now swinging for the fences — by making daring structural choices and executing those with nary a halfway measure. She’s also baring her soul from so many perspectives here that her grand theme — identity — falls by the wayside, leaving Cushing to go up against her ultimate question at this time: Is existence getting better or worse?

Entry point is a meta-semiautobiographical self-examination, “Part One: The Disease,” featuring first-person narrator Noelle Cashman (coincidentally, a writer of extreme-to-the-edge-of-absurdity fiction). Author Cushing is obviously having fun parodying modern memoirs of the “just between us, let’s let it all hang out” variety with passages like Cashman’s mission statement:“I’m not waking up pain. Or at least, what I wake up isn’t confined to pain. There is, of course, madness and squalor, too. Not to mention the oddness of the outcast. The giggling. The grimacing. Let’s sum it all up by saying that my drugs (books) wake up the latent Foulness (both physical and mental) already lurking inside my readers.”

All who haven’t just turned the page from this review might ask what sort of text comes on the heels of such an audacious introduction. And what follows is indeed a twisting and twisted bill of fare. It tries to meet the demands of Milan Kundera’s model for a “polyphonic novel,” with pseudo-academic monographs, confessional (perhaps nonfictional) anecdotes goosed up with surreal details and satire crafted like essays as found in magazines/blogs that cater to provocateurs and nihilists.

So, the method has a lot of madness. But the plot — can it be recognized as one of the classics, like “A stranger rides into town with scores to settle” or “Everything changed the summer I discovered I like girls”? Try this one on: as Cushing — er, Cashman — finds ways to fight back a chronic depression, her now-opened eyes become aware that the entire world is changing hue, becoming snotty gray in color (and spirit).

When H.P. Lovecraft wrote an outrageous novelette about an invasive color, it was influential — but that author didn’t dig into his own pulp tales to unearth themes and allusions. Literary generations that followed have been more prepared for (and the industry has been more accepting of) mining the emotional ore of such stories. Thomas Ligotti, Victor LaValle and others have struck gold for their readerships. With “A Sick Gray Laugh,” Cushing has gotten so far away from traditional storytelling that it’s as if her mine collapsed into a labyrinthine cave. A mother lode of psychological insight might be down there, within readers’ grasp — but not everyone may be able to find their way.

Still, if all you can get out of this book are its surface pleasures, Cushing has worked hard to make sure there’s a trove of goodies. “Part Two: The Case Study,” perhaps more dry than intended, gives Midwestern values an acid bath of satire, filtered through the history of refugee pioneers from a very particular religious cult. In “Part Three: The Cure,” competitive running and faux-stigmata are just two of the means by which Ms. Cashman proves herself worthy of institutional discharge — if not exactly a clean bill of sanity in her own eyes. Or, perhaps those of author Cushing. •