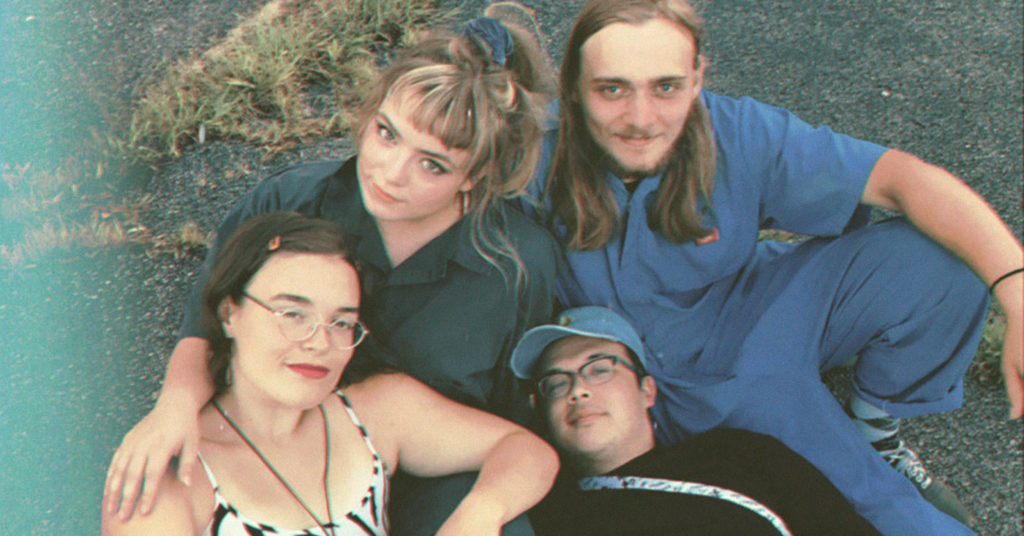 Quality Cable keyboardist William Lamkin said their song “Cavalcade” was, at one time, poised to be an ode to crustaceans. “We were dead set on it,” Lamkin laughed, “and maybe we should have.” But, the band went through a last-minute change when singer Emma Treganowan forgot the lyric sheet as they went to record the song. Ultimately, it lead to something deeper.

“It dives into the emotions of someone stuck in their lousy bummer of a small hometown, getting so tired of spending time there,” Lamkin said of the song. “It paints a picture of the relationship a lot of people have with the places they grew up in, usually a dissatisfied one, but a codependent one nonetheless, which is where the line, ‘I can’t sleep when you’re not there’ comes from. Eventually, this codependency even extends to substances like drinking too much. It’s a love/hate relationship and it takes its toll. The chorus — ‘Break away from this cavalcade’ — is like this internal pressure to leave, just building and building until it explodes.”

Sonically speaking, “Cavalcade” is not an easy song to qualify. The twisty, jazzy, noir track also functions as a clever pop song that sounds more mature than one might normally expect from such a young band. By the time you get used to the odd-time pounces, the song goes quiet and dreamy, with Treganowan’s airy vocals providing the perfect melodic vehicle to float the song’s breezy atmosphere.

“Around that time ‘Cavalcade’ came about, we were listening to a lot of King Gizzard & The Lizard Wizard,” Lamkin said. “We were also getting familiar with local band Wombo at house shows. We were inspired to write a song in a different meter than we usually do, so Emma started writing a song in 5/8, which ended up being the riff the verses and the chorus were based off of. For the transition, it so happened that I was writing another song that worked perfectly to bridge the gap, even though it was in 6/8. It’s a huge contrast between them, but that’s what really makes it work. Moving between all of the sections makes the chorus so satisfying when it finally gets there.”

Lamkin also considers the song a definitive example of what Quality Cable is capable of. He says they wanted to show people they have progressed since their EP, Static.  Newer songs like “Cavalcade” are to prove to people “what they can do.”

“Quality Cable’s still a pretty new band — [in a] lot of ways we’re still finding our footing, our sound and our audience,” Lamkin said. “A lot of that first year was spent writing music because you have to have enough songs to fill up a set, right? Well that urge to constantly be writing never went away. We’re always working on stuff. We started writing Paper View right around when the band was a year old and we were just then getting to a place where we were coming into our own. So ‘Cavalcade,’ like the rest of the songs on that EP, is us just throwing everything out there.” •