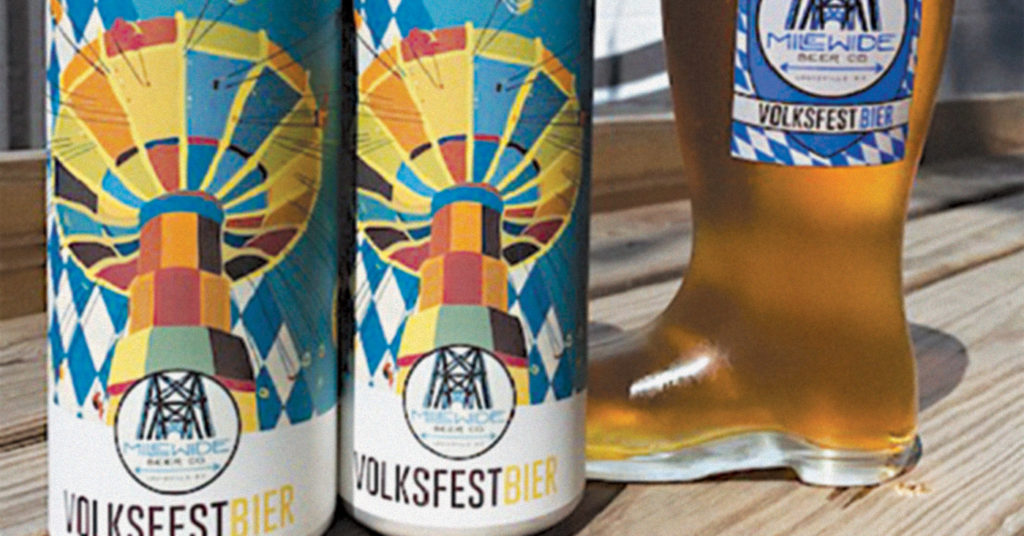 Fall is so close that we can taste it — the wet-hop harvest ales, pumpkin beers and that brew-tiful “fall in a glass” Oktoberfest beer. But, would you be surprised to learn that Oktoberfest isn’t actually a style of beer? And that the Oktoberfest beers we drink here are not the same as those most commonly served at the Oktoberfest in Germany? And have you ever wondered why Oktoberfest beers start hitting the shelves in August? Then, prepare to have your beer brains blown. (If you’re one of those weirdos who actually likes summer, feel free to read this with a Hefeweizen in hand).

First, a little context. Munich is the traditional home to Oktoberfest, Germany’s largest folk festival, which draws roughly six million visitors annually. Beginning in 1810 to demonstrate national unity during the Napoleonic Wars, the revelry was originally held in mid-October. Later, however, it was moved to the last two weeks of September, running into the first weekend of October.

The answer is rather anti-climate-ic… warmer weather.

While you might imagine Oktoberfest as a suds-slinging free-for-all, there are actually only six breweries within Munich that are allowed to serve their beers at the festival — Augustiner-Bräu, Hacker-Pschorr, Hofbräu München, Löwenbräu, Paulaner and Spaten (we imagine a sign at the door that reads, “Sorry, you must be at least this tall to sling beers here”). Interestingly, whereas the beer providers are highly restricted, the actual style of beer served is not so strictly regulated, and the most common beers served have changed a bit over time.

If your lederhosened esel found itself at Oktoberfest during the first six decades of the festival, you’d have been enjoying a Bavarian Dunkel (a dark lager with notes of cocoa, toasted malt and mild winter spices). However, if you were there in 1872, you would have witnessed riots at the Spaten line, as its Dunkel keg blew, and they started pouring a copper-colored Vienna-style lager instead (thank you, pinch hitter). And, for roughly the next century, Vienna lagers and the reddish-brown Marzen beers reigned as fest kings.

The Marzen (German for “March”) beer was born in the 1500s when Duke Albrecht V outlawed brewing in the summer due to the heat’s negative impact on the consistency of Bavarian brew. As a result, brewers would work overtime in March to build up large quantities of beer for summer storage in cool cellars, where lager yeasts were most active. This, by the way, inadvertently led to the predominantly lager-based beer culture Germany is known for today.

Marzenbier was first officially labeled in 1841 by the Spaten brewery. It is a malt-forward golden-amber-colored lager generally between 5% to 7% ABV. This slightly higher alcohol content was necessary for surviving the long summers in storage (we need lots of alcohol to survive summer, too). The beer has a sweet, toffee-like, malt character and low hop bitterness. Older versions tended to be darker than the current German variety, though many North American craft versions still tend toward the older, darker coloring.

Vienna lager also officially hit the market in 1841. This variation on the Marzen style is crisp and clean, brewed with lighter malts for more of a reddish coloring. This drier concoction has less of the sweetness of a Marzenbier but is still malt-forward with a bready, toasty character. The Vienna lager has slightly more hop bitterness than the Marzen but still just enough to deliver a balanced finish.

So, Marzens and Vienna lagers: both yummy but perhaps a winzig* bit heavy for an 18-day festival that centers around pounding beers. Thus, in 1990, a committee of the aforementioned big six breweries decreed “Festbier” — a light- to medium-bodied golden-blond lager — the new king. Festbier still retains a bit of the slightly sweet, malt-forward character of the Marzen or Vienna variety but may more closely resemble a Helles Bock.

So, what in the helles are we drinking here in America when we drink a beer labeled Oktoberfest? In the European Union, the term Oktoberfestbier is not describing a style but rather a beer made for the festival season (and, legally, only the big six brewers are allowed to use this term over there). However, it is commonly applied by American brewers to label their fall offerings, modeled after any of the traditional Munich selections, most often the Marzenbier.

So, to sum up… Oktoberfest starts in September. Marzen beers are brewed in March. And Oktoberfest beers (which can actually represent a variety of styles) frequently hit the U.S. shelves as early as August, thanks to the same holiday creep phenomenon that has us shopping for pumpkins in the summer and listening to “White Christmas” in the fall.

While you await our Oktoberfest Part Zwei article, which will focus on how Louisville celebrates Oktoberfest, we suggest you let your palate internalize the knowledge your brain just gained by sampling some of the various styles of Oktoberfest beers in the city. For example, check out Mile Wide Beer Co.’s Volksfestbier, a highly drinkable representation of the current German Festbier style. Or, look for Akasha Brewing Co.’s 12 Foot Fall Lager, which is a Marzen. Or, Gravely Brewing Co.’s Oompah, which is somewhere between the Festbier and Marzen style.