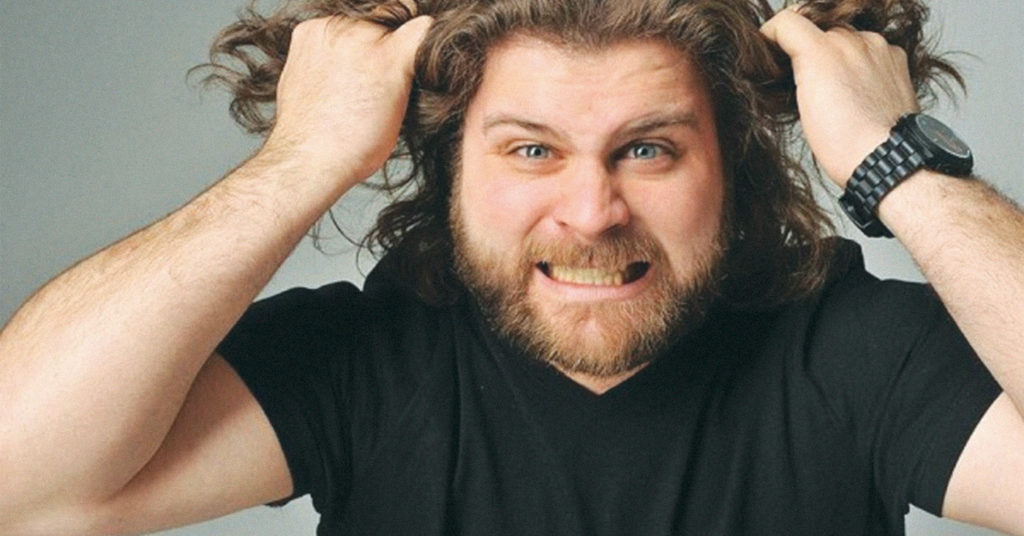 Whatever you do, don’t make small talk with comedian Zach Martina because he hates it. “I don’t care where someone I’ve just met at a party, and will probably never see again, works. Or how many times you go to Target in a week. Unfortunately, to not be considered a degenerate in modern society, we’re supposed to care about that shit,” he told LEO. His debut album was “Skunkman,”which can be heard on SiriusXM. He has performed at Rock on the Range, Best of the Midwest at Gilda’s LaughFest. He headlines Comedy by the Bridge on Thursday.

LEO: Were you a funny kid?
Zach Martina: Yeah, I was always the one making everybody else laugh. I was told that I would have won ‘Class Clown,’ but there was another kid who went around and actually campaigned for it. … So, I’ve always been funny. My dad has a real dry sense of humor. My mother is hilarious, usually when she’s not trying to be. But if she tries to be funny, she absolutely is not. And honestly, my brother is the single-funniest person I have ever met.

What made you take the stage?
I grew up in that time when Comedy Central was old episodes of ‘Saturday Night Live’ and ‘Comedy Central Presents’ …  There was no original programming. So, I kind of fell in love with stand-up. It wasn’t until I was 25 and managing a bar that I brought stand-up into [it]. One of the comics found out comedy was something I always wanted to do but never seriously considered. He goes, ‘Listen man, try it, and you’ll never wonder what if? If it goes well, I assure you’ll be hooked. If it doesn’t, you won’t wonder if you missed out on something.’

How did it go?
Fortunately for me, by my standards at that time, it went well. Looking back, I’m sure it didn’t. I would say the adrenaline from doing stand-up is a healthier alternative to a needle of heroin. However, I wouldn’t say the need for validation is any healthier.

What’s the worst part of being single versus being married?
I didn’t really like being single. I’m not a social person. I like to talk to people. I just don’t like for them to talk back. It’s why I like stand-up. I get to talk about whatever I want, and nobody really gets to retaliate. It’s not that I don’t like people — I just have no patience for small talk. I don’t want to talk to people who I don’t care to know about. I don’t care where someone I’ve just met at a party, and will probably never see again, works. Or how many times you go to Target in a week. Unfortunately, to not be considered a degenerate in modern society, we’re supposed to care about that shit. But I’ve found that my wife is someone who I genuinely enjoy and look forward to having conversations with.

Is it tough being the only male in your house?
No. I mean, my girls are still young. So, I don’t know that it’s even a consideration of being like, ‘Oh, my God, this place is overflowing with estrogen,’ yet. … However, I do see it coming. There is a puberty wall I’m going to drive into at full speed in a few years, and I’m fine with it. I don’t know if it’s hacky, or clichéd, but I really do love my family. They’re fun. I love watching my girls going to school. They’re learning about the world and starting to form their own opinions on things. And they’ll be like, ‘Well, this is how it is.’ And you’re thinking, ‘It’s so cool that you think that, but you don’t know how it is yet. You don’t know enough, just yet.’ Ya’ know? But you don’t say it, or you say it delicately because you don’t want to crush their confidence. I want my daughters to be strong and have strong opinions, but we all need to do it with the help of knowledge, which might be a problem the whole world is facing right now.