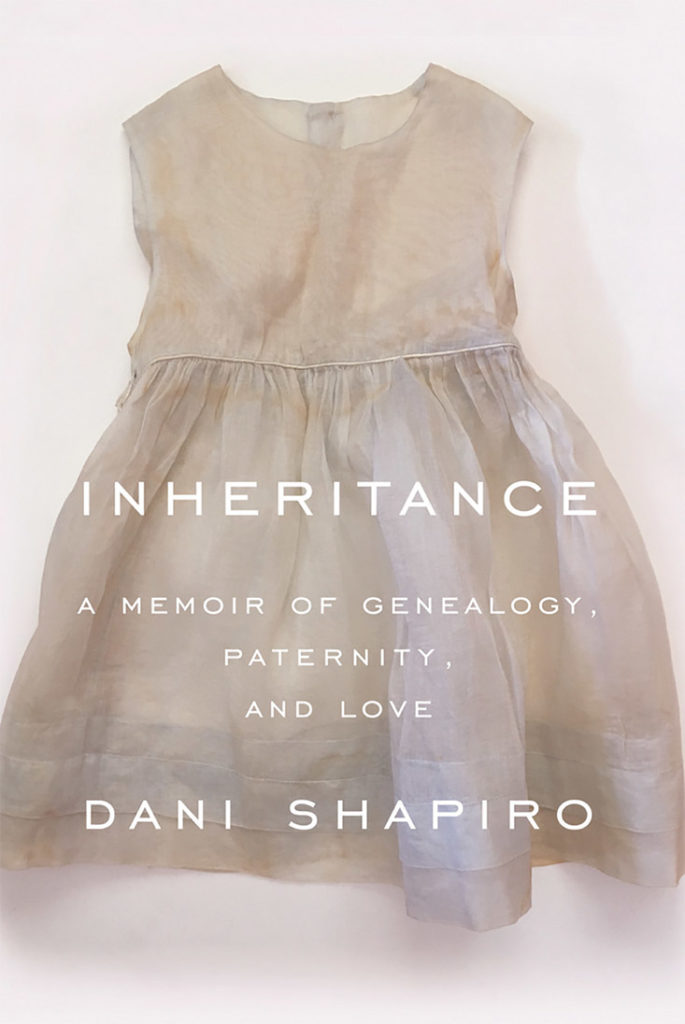 After publishing four memoirs and teaching writing at institutions such as Columbia and Wesleyan universities, you’d think that Dani Shapiro knows herself thoroughly.

And yet… just a little moment with what seems little more than a novelty of our times — giving some saliva to a genetic testing kit — quickly tumbled into a challenge to all she knew. Her parents had kept a huge secret from her — and perhaps this had included and led to maintaining huge secrets from each other.

Extended family and the orthodox Jewish community are also important parts of Shapiro’s raising, and their historical beliefs toward child conception factor in the story. So do historical  and contemporary — views of today’s society toward medical technology and information sharing.

Bringing all of this to a readership as personal experience that can thoroughly be probed and meditated upon — this is Shapiro’s “Inheritance,” as her new bestseller is titled. And her journey through the history, the depth and the consequences of family secrets is what brings the author to Kentucky Author Forum on Wednesday, Sept. 25.

She’ll be interviewed by Robert Siegel, veteran radio journalist and former host of NPR’s “All Things Considered.” LEO spoke with her by phone about lessons learned during this intimate and unexpected journey.

LEO: Do you feel that your mother kept wondering how to get it all right? Do you believe you have a full portrait of her frustration, or has your understanding continued to evolve during and maybe since writing ‘Inheritance’?
Dani Shapiro: My mother has always been a bit of an enigma to me. There was a lot that I didn’t understand about her — frustrations, unhappiness. And very complicated feelings toward me, her only child. Somewhat antagonistic at times. Certainly envious — which is something that when I became a mother myself, was just unfathomable to me, that you could feel that way about your child.

So, I always wondered about it. I thought I had put it at rest. I’m more of a forward-thinking person than a past-thinking person — writing all these memoirs might belie that, but it’s really true. And yet, when I made the discovery of what my parents went through to have me and the circumstances of my conception, I had to rethink and re-understand many things about my mother.

I think I developed a deeper sense of compassion for her, for the loneliness that she must have held in always keeping such a massive secret. No matter how she held it — by which I mean, I don’t think she thought about it consciously.

To what degree do you think it’s a strengthening of someone along their path of life to have gone through an experience of discovering birth identity in the manner that you have? Do you think it contributed to keeping you away from complacency?
It could have undone me. It didn’t. My teenage years, my early 20s, I was a pretty messed up young woman. And there’s a lot of luck involved when you come out of a period of time like that. I had a lot of good fortune. I didn’t get into a lot of trouble. I didn’t do anything for which there was no way out. I slid through a rough patch that I think was connected to having that sense that I didn’t add up, and I didn’t know why.

I became a writer. And writers — we are diggers, we are archeologists, we are sleuths. Whether we’re novelists or we’re memoirists, we’re looking for something. We’re trying to put a story together — we’re making something out of nothing.

I often will say to my students, ‘If you know what happened, why write it?’ There’s nothing less interesting to me than sitting in a room and writing what you already know. In becoming a memoirist, I was always digging, and I would ultimately be dissatisfied with the digging I’d done, and I’d need to do more, and I didn’t know why. I couldn’t explain it to you. I didn’t know why I’d become this publicly contemplative continuing to go back and try to understand through the laboratory of my own life.

Now, I see that a significant part of my body of work, including novels, is — to quote a line from my book ‘Still Writing’ — ‘Chipping away at my own bewilderment.’ There was no complacency. I do think that that hunger was a good thing for me.

People have been asking me lately, ‘Is it always better to know a secret?’ I think it is, ultimately — but we can’t be facile about that. I think it matters when we discover what we discover. If I’d discovered as a child, or as a young person, that my father was not my biological father, I’m not sure I would’ve survived it. It was a time where anyone who had an unusual story as to how they came to be, didn’t know. Even adoptees were often not told. So, to not be able to know anything or do anything and to feel entirely alone in the world? That would’ve been really rough. Instead, I’m finding out at a time when lots of people are finding out. And where I was in a stable and contented period of my life. •

This advisor to presidents of both parties will be in conversation with the mayor at the Main branch of the library Monday evening.

Pandith’s recent book is “How We Win: How Cutting-Edge Entrepreneurs, Political Visionaries, Enlightened Business Leaders and Social Media Mavens Can Defeat the Extremist Threat.” This investigates factors and tactics in enhancing stability within and for, Muslim communities. •