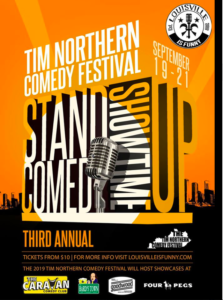 Louisville is Funny is out to prove their name in their third-annual Tim Northern Comedy Festival, featuring local, regional and national comics sure to provide side-splitting evenings of stand-up acts.

Featured comics include Louisville native Ryan Riker, whose “favorite target is himself;” Kentucky-born Misty Hines, a finalist in Southern Kentucky’s Got Talent; and Zach Wycyff, the official Funniest Man in Cincinnati.

In addition to great nights of stand-up shows, for the first time ever, the festival also includes a comedy competition. With the winner receiving a prize of $1,000, you can be sure the fledgling comics will bring their A-game. A special Saturday-night showcase will feature finalists for the contest.

Louisville is Funny works to build the comedy community in the city as well as connecting local artists with local businesses and charities. In addition to hosting their own events, they can help businesses or other hosts find the right comedy talent to perform for their event.

The event will host showcases across the city in fun venues, including Goodwood Brewing, Four Pegs, Comedy Caravan, and The Bardstown. The festival starts on Thursday, September 19 and ends on Saturday, September 21. Tickets for most events are $10 in advance or $15 at the door. For more information on specific showcases, visit RedPinTix.com.