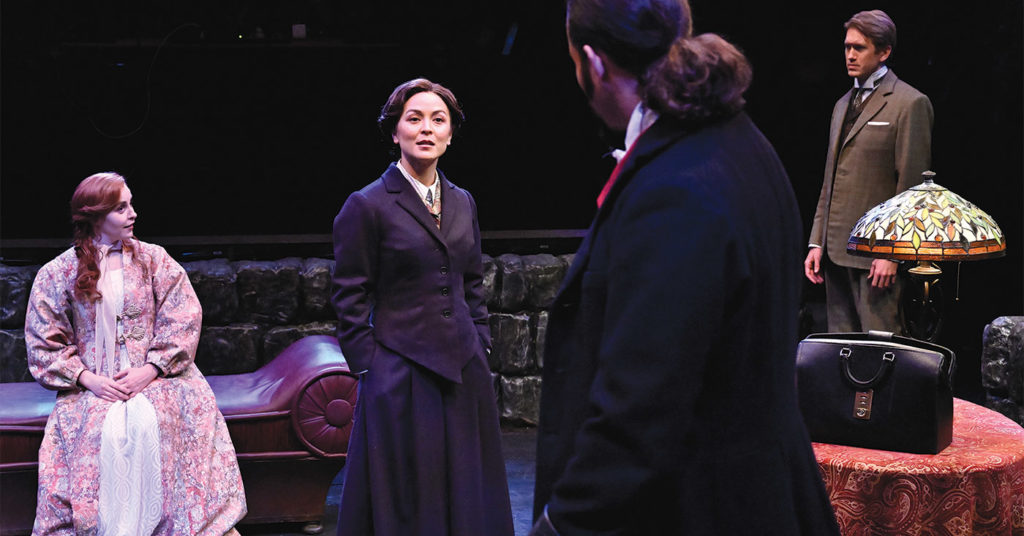 “Dracula” may be an annual tradition at Actors Theatre of Louisville, but recent productions seem determined to ensure that audiences have a unique experience each year, even going so far as to change the endings we’ve come to expect for some of the characters. This year brought fresh takes on old scenes, as well as unprecedented interpretations of the characters we’ve come to know and love.

In this year’s production, we were introduced to Anna Van Helsing (Rebecca Hirota), the first female Van Helsing since local favorite Adale O’Brien in 2001 and first woman of color to play the role at Actors Theatre. Anna is largely the same character as Abraham: a noted Dutch physician whose interests tend to veer towards the occult, a fierce adventurer, and a protective friend. Her scenes with Dracula (Santino Craven) were as satisfying as ever, watching these two hunters circle each other with veiled threats and taut energy. But there was something satisfying about seeing a woman play the same role — and be treated with the same respect by the other characters.

Dominican American actress Kat Peña also brought a fresh — and timely — take to the role of Margaret Sullivan, Dr. Seward’s (Brandon Meeks) assistant. She speaks with a Dominican accent, refers to Van Helsing as “Profesora” and drops the “from Dublin” when telling Briggs (Noah Keyishian) that Dr. Seward took her in “fresh off the boat.” This allows for a commentary on the way we view immigrants today compared to the prejudice against Irish immigrants in Victorian England.

Fight director Jake Guinn returns to the production this year, ensuring that the combat with Dracula is as thrilling as it should be. The prologue scene follows along the lines of last year’s performance, showing a wide variety of Dracula’s victims before introducing us to Mina (Mollie Murk), who is given the opportunity to fight back against Dracula again this year before ultimately succumbing.

Another small but impactful change occurred in the scene of Lucy’s (Megan Massie) transformation, in which they force her to drink from the chalice not by shoving it down her throat but threatening to kill her love, Jonathan Harker (Xavier Bleuel) who sleeps nearby. With that, she takes the chalice herself.

Neill Robertson returns to play Renfield for the third in what we can hope will be several years, but there’s always something new to find in his portrayal. I loved seeing his moments of sympathy for the others — his genuine devastation at the sight of Seward’s body, his protestations of “I had nothing to do with this!” at seeing Lucy under Dracula’s control. Robertson’s Renfield can be delightfully humorous in all the right places (in fact, one of my favorite moments with Van Helsing was seeing her sincere amusement in conversations with him), but he never forgets that Renfield is Dracula’s victim… and someone who can understand all too well what Lucy’s going through. •

[Ed. note: This story has been updated to reflect that Rebecca Hirota was the second female to play Van Helsing.]

Teatro Tercera Llamada’s Festival De Obras De Diez Minutos (Ten Minute Play Festival), which ran last weekend at The Bard’s Town, was the first local undertaking of its kind; a program of plays in Spanish (with English supertitles) by local writers. It was a triumph both in terms of attendance and in artistic quality.

And it was a watershed moment, offering incontrovertible proof of the creative range and power of this community. Eight plays by seven writers. More than a dozen actors. Strong scripts and great performances. A wide range of topics and tone. Alas, it ran only one weekend, but we will hear more from these voices.

“Lágrimas y perlas,” by Cuban-born Pablo Bauta was an angry and poignant monologue on the loneliness of an isolated, abandoned immigrant (powerfully portrayed by the author) comforted only by the flowers in his garden (directed by Haydee Canovas). In “El cumpleaños,” by Carlos-Manuel, of Mexico, an old tragedy haunts (literally) the lives of two sisters trying to celebrate a birthday (Jomaris DeJesus, Jo Valor, and Xenia Miller and directed by Jay Marie Padilla-Hayter). In “La cita,” also by Carlos-Manuel, a droll twist turns what seems to be an anger-fueled therapy session into an inspiring glimpse of the realities of immigrant life and the inspirational power of mentors (Lily Hernandez and Maria Fernanda Ocampo and directed by Padilla-Hayter). “La mesa redonda,” by Xenia Miller (from El Salvador) was a splendid, satirical look at pretentious academics in a literary society whose arcane regional quibbles over terminology spur rhetorical fireworks and, eventually, reconciliation (Alba Sola, Pablo Bauta, DeJesus and Miller and directed by Canovas).

“Yes, of Course,” by Lily Hernandez (of Cuba), was a brilliant one-person comedy (performed by the author) that recounted the workplace adventures of a woman whose droll career is largely based on answering every question that comes her way with the titular phrase. I don’t know whether it’s a great play or a great piece of stand-up comedy or both, but the character is brilliantly conceived and executed, and I hope to see more of her adventures (directed by Canovas). “Los tres juanes,” by Canovas, is a fascinating, fiery depiction of three men trying to row from Cuba to the United States (performed by Guillermo Sollano, Francisco Viveros and Anthony Silvera and directed by Canovas). “El viaje,” by Cinthia Murguia, starts with a harrowing crime when a masked man invades a couple’s hotel room, and then it takes a satisfying, comic-romantic twist (Brenda Moran, Julio Samayoa and Daniel Smith and directed by Padilla-Hayter).

“Asylum,” by Reynaldo Gamez (Cuba), was a riveting depiction of an ICE interview with a young Cuban seeking asylum. By turns, it is infuriating, absurd, and compassionate (Orlando Parrado, Sollano, Smith and Ocampo and directed by Padilla-Hayter).
—Marty Rosen •