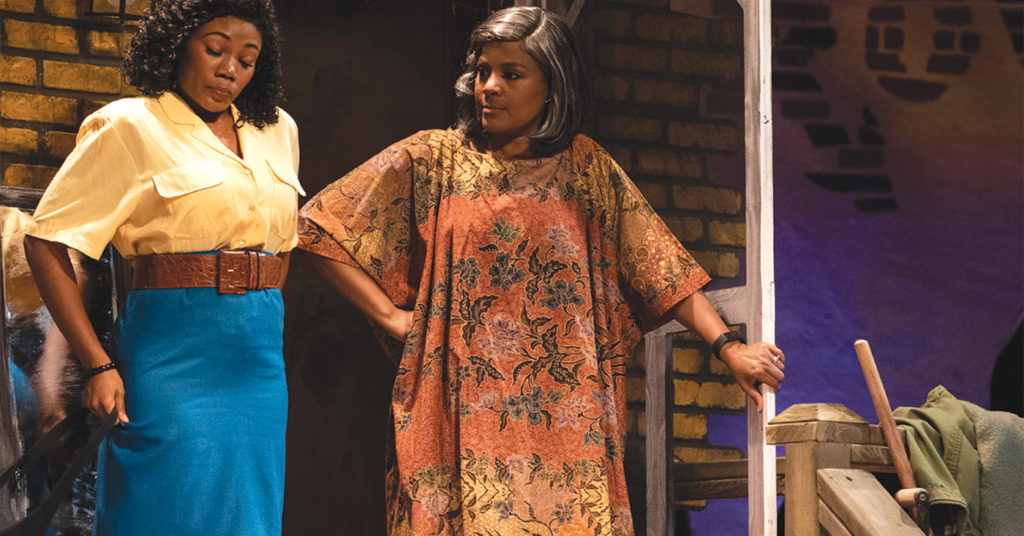 The UofL Theatre Arts Department devoted its 2017-2018 season to producing plays written by women — and it was an extraordinary season.

This season, the Theatre Arts Department is collaborating with the university’s African American Theatre Program to produce A Season of Black Plays. Seven plays are on the schedule: “King Hedley II” by August Wilson; “Zomo the Rabbit” by Psalmayene 24; “Fires In the Mirror” by Anna Deavere Smith; “Detroit ’67” by Dominique Morisseau; “Six Degrees of Separation” by John Guare and “Milk Like Sugar” by Kirsten Greenidge.

The simple fact that the two companies have decided to take up such an ambitious and visionary challenge is, in itself, a marvelous thing.

And if the season opener, August Wilson’s “King Hedley II,” is any indication, this will be an amazing season (at $50, season tickets are a great bargain).

In the context of Wilson’s “Pittsburgh Cycle” — his 10-play, decade-by-decade exploration of the African American experience in the 20th century — “King Hedley II” is the ninth piece. It’s set in the 1980s, during the Reagan administration. In the context of Wilson’s overall series, this play comes toward the end. It premiered in 1999. (Wilson completed three more plays including two in the “Pittburgh Cycle” before he died in 2005).

With “King Hedley II,” Wilson was at his peak. And at his peak, he was arguably the most virtuosic playwright American theater has ever known. He had spent decades thinking about race, gender, religion, music, business, commerce, justice, agriculture, architecture, backyards, gardening, violence and history.

This play is the work of a master storyteller and builder of character. Wilson’s mercurial rhetoric flips from stiletto-sharp quips and well-wrought anecdotes to stunning torrents of passionate, eloquent reasoning. Or, he can simply turn a simple action — like placing a plant in the ground — into a richly-layered parable. This is a play that demands great performances. And that is exactly what Director Baron Kelly elicits from this marvelous cast.

The titular character (played by Xavier Mikal Harris) has recently returned home from prison (he served a term for killing a man who slighted him). King is living with his mother Ruby (Marquita Howerton) and his wife Tonya (Kala Ross). King’s goal is to open a video store. To raise the required money, King has partnered with his friend Mister (Tyler Tate) to fence stolen refrigerators. But King is also dealing with a domestic drama: Tonya is pregnant — and it’s a pregnancy she wants to terminate.

Her husband, after all, is a man who carries a Glock and has already killed someone. For King, this child is his future and legacy. For Tonya, the child is a tragedy-in-waiting. Well into the first half of the play, their battle over Tonya’s planned abortion culminates in one of the most haunting pieces of theater I’ve ever seen. As Ross delivers a furious, fiery manifesto against bringing a child into this world, Harris goes utterly still and falls into a long, watchful, inscrutable stare, as unmoved and unmoving as a boulder in a stream. The juxtaposition of Ross’s operatic passion and Harris’ stone-cold stillness is a magnificent thing to see.

But there are plenty of other such moments (and plenty of wit as well) in this thought-provoking, multifaceted drama. The action takes place in the backyard behind Ruby’s tenement. It’s a yard populated by towers of newspapers saved by Stool Pigeon (Alphaeus Green Jr.), an oracular figure devoted to preserving the past and making prophecies about the future. And when Ruby’s old boyfriend, the conman and gambler Elmore shows up (Charles A. Nasby), his cool jazzy outlaw image also introduces a whiff of the past into this cruel, new world.

As is often the case in Wilson’s dramas, the past is never past.

“King Hedley II” is set nearly 40 years after Wilson’s “Seven Guitars.” The two plays are linked — but the action in this play is self-explanatory (and there is an excellent explanatory note in the program).

This is a top-notch production in every dimension, with scenic and lighting design by Kevin D. Gawley, costumes by Zhanna Goldentul, sound by Jerome Willis and prop designs by CeCe Phillips and Em Richardson.•

From the very name, “She Kills Monsters” promises something action-packed, badass and frankly just fun as the opener for Commonwealth Theatre’s 2019-20 season. If that’s not enough to hook in the nerds, the premise of a young woman who gets into the role-playing game Dungeons & Dragons ought to do it. The show itself is full of exciting combat, twists and turns and delightful banter that every good D&D game deserves. But Qui Nguyen’s play is more than just a fun romp.

Ultimately, it’s about Agnes (Alexandra Polur Gold) getting to know her deceased sister Tilly (Sadie Lawrence) through a book of notes about a D&D game Tilly had been planning on running. At times, Agnes finds herself asking questions about who her sister really was from the self-insert character, Tilius the Paladin, and sometimes finding answers that send her reeling. Although Tilius warns her that the game isn’t meant to be therapy, Agnes does channel her grief into it intensely and, of course, eventually finds the closure and healing she needed through it.

While I was pleased from the beginning to see a show that celebrated teenage girls playing tabletop games, one thing I didn’t expect was for “She Kills Monsters” to address the intersection between nerd culture and queerness — until Tilius and her companions tell Agnes that everyone in “Newlandia” (the world of Tilly’s game) is gay… because Tilly herself was gay. It’s not a factor that’s often shown in media representations of D&D, but it’s an element that resonates with my experience and the experience of many other tabletop nerds. While the character revealed to be gay is also dead from the beginning of the show (though undeniably the most interesting character), thus making this another tragic story on that front, there was still something empowering about that representation, especially for a high school production with many high schoolers in the audience. •