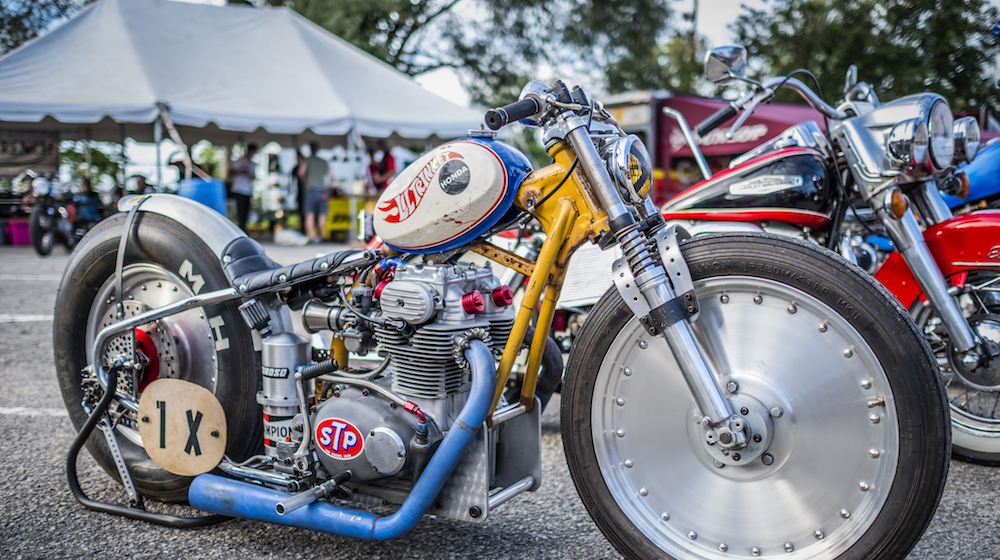 A vintage bike at last year's Kentucky Kick Down.

No, you don’t need a studded leather vest to enjoy Kentucky Kick Down, the annual festival orchestrated by local vintage motorcycle enthusiasts.

Heck, you don’t even need to have a motorcycle or know how to ride one.

Festival’s founder Scott Halbleib stressed that while vintage and custom bikes certainly are key to Kick Down, the festival is family friendly, with music, food, a pool, bowling and a host of activities. It runs Friday, Sept. 20 through Sunday at American Turners-Louisville on River Road.

“It’s not, like, this Harley-Davidson, Sturgis kind of thing,” he said, referencing the annual Sturgis Motorcycle Rally in South Dakota, which draws thousands of bikers. “It’s just supposed to be a fun, quirky event.”

The event began in 2013 as Halbleib’s pet project for the Louisville Vintage Motorworks motorcycle club. It began as a glorified one-day street party — with motorcycles as a focus — held at the corner of Winter Street and Barret Avenue.

As Kentucky Kick Down’s popularity grew and it expanded to three days, it relocated to Turners on River Road.

Not only will the event include dozens of vendors and plenty of vintage cycles, but there will also be local and regional music from 15 bands that will keep things rocking. Turners’s indoor pool and four-lane bowling alley will be open, as well as its lounge, which will be open until 2 a.m. on Friday and Saturday night. Four food trucks will offer fare to feed attendees.

For the motorcycle owners, entry for your bike in the show is $10, and categories include race bikes, choppers and even mopeds. All bikes must be at least 25 years old. In addition, there will be stunt shows and a burnout pit for cyclists who want to kick up some dirt. A 200-foot-long culvert that divides two fields on the Turners property will also be converted to a mud bog for dragging.

Essentially, the culvert is prone to holding water. Add motorcycles, and pretty soon it’s a muddy, slippery mess that wheels out plenty of fun for those who don’t mind getting themselves and their bikes active in the muck. If you’re planning on seeing it up close, you might want to bring a rain poncho. And a change of clothes.

“You sign a waiver and do your thing,” Halbleib said of participants who take their cycles into the bog. “It’s kind of a big spectacle. It’s just a fun thing for everybody to watch.”

Kentucky Kick Down officials even hand out humorous awards for standout participants.

The festival starts on Friday night with music by Decline Effect and Vice Tricks, and the pool, bowling lanes and lounge will be open. It’s essentially a kick-off evening, with people who opt to camp at the event setting up their tents, getting the weekend rolling.

Halbleib said there are 50 campsites along the Ohio River and many more on a baseball field at Louisville Turners. In addition, truck and RV parking is available nearby at the Lebanese American Club.

A Miss Kick Down contest is another highlighted event, along with a charity ride. This year’s charity is the Arrow Fund, an organization focused on preventing cruelty to animals. (The event also is dog friendly.)

Kick Down draws people from as far away as Canada, Texas and Florida.Kentucky Kick Down has grown exponentially since it moved to Turners last year. Previously, attendance had increased 20% to 30% each year, Halbleib said, but with the expanded space and added days, last year’s attendance doubled to a total of about 4,500. This year, Halbleib expects around 6,000 people coming through the gate over the course of the weekend.

And Halbleib stresses that Kentucky Kick Down is universal — people who have never sat on a motorcycle in their lives show up and have a good time, whether they’re watching the events, bowling or enjoying drinks at the lounge.

“It stems from the vintage motorcycle crew, but it’s kind of an all-are-welcome thing,” he said. “You may not be into motorcycles — you might want to come see some bands or get another swim in at Turner’s. It’s kind of a Louisville party. Just chill, relax and have good time.”

Tickets to Kentucky Kick Down are available online or at the gate. They’re $20 for a one-day. General admission pass or $30 for a weekend pass. Camping spots and RV parking cost extra, but automobile parking for visitors is free.