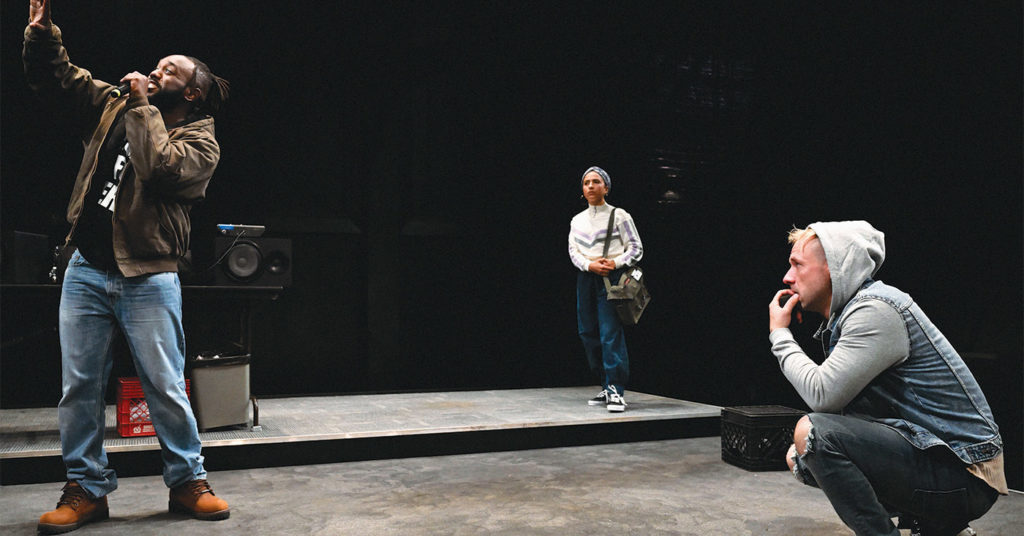 2019 has been a big year for playwright and poet Idris Goodwin. It’s his first full year as artistic director at StageOne. His new break beat poetry book “Can I Kick It?” releases in October. And right now, two of his plays are being performed concurrently: “Ghost” at StageOne and “Hype Man: A Break Beat Play” at Actors Theatre of Louisville. The latter is one in a series of plays by Goodwin inspired by his love for hip-hop.

From the very first scene, “Hype Man” addresses a dilemma that any kind of artist has probably faced or considered at some point: the question of whether to stand up for your principles, even if it could cost you artistic success. It’s the question that hype man Verb (Mykele Deville) faces after the shooting of an unarmed black teenager by police. Verb and main rapper Pinnacle (Shane Kenyon) have an upcoming gig at “The Tonight Show,” and Verb wants to speak out about the event, but Pinnacle doesn’t want to make such a career-jeopardizing move. Their beatmaker, Peep One (Angelica Santiago), is somewhere in the middle — wavering throughout the show between taking a stand and furthering her career.

To heighten tensions, Verb is black, and Pinnacle is white, so while both are disturbed by the news, for Verb it’s something much more personal and urgent. Pinnacle claims, “A lot of artists gonna speak up.” Verb challenges, “How many white artists gonna speak up?” It creates a rift between the two throughout the show as Verb becomes more involved in protests, and Pinnacle commits to sticking to the music and “not getting political.”

It would be easy to make Pinnacle unsympathetic and one-sided to make a point, and often he is pretty intolerable. He’s a poor ally — he chooses success over his friends and refuses to acknowledge any privilege he has as a white rapper. But this is not a script for simplified characterization. Early on, we’re shown why Pinnacle is so afraid to risk success, how far he’s come and how hard he’s worked to achieve it. He’s also shown to care deeply about Verb and worry about him becoming another victim of police brutality, even if he doesn’t like to “focus on the bad things.” But being a full character doesn’t let him off the hook for his failure to speak up when it counts.

Nor does it let Verb off the hook when he’s shown to have double standards. When Peep One points out the horrible way that women are often treated in hip-hop, Verb is initially dismissive and finally says, “That’s not my experience,” something similar to the way that Pinnacle treats Verb’s anger over police brutality. In fact, it’s this moment that makes Peep One’s character so essential, not just holding Verb accountable but hip-hop as a whole. Each character has a unique experience and perspective addressing the situation at hand.

There are plenty of stories out there about the rise and fall of a band, but one thing that’s interesting about “Hype Man” is that we begin the play as the band is already coming apart. Even before the news of the shooting breaks, there’s clearly tension: Verb’s past, new creative practices, and new business associates have strained the partnership that was once Verb and Pinnacle. It’s also unique in that there’s a possibility for something new to form, though whether it does is left open. Like Peep One says, “It’s about evolution.” •

“Ten-Tucky,” The Bard Theatre’s annual festival of short plays, is back. This season it’s hosted and organized by Sabrina Spalding and Rachel Allen. And it is, as always, a fun, fast-paced night of smart, witty, well-performed theater.

Zoe Peterson’s “Investigation #43” is a surrealistic, sci-fi noir set in an alternative universe where Waffle Houses are not mere eateries; they’re part of an enormous interdimensional network. When the hapless (and high) Danielle wanders into one, she attracts the droll attentions of WH detectives (Kimby Taylor-Peterson and Darren McGee); directed by Allen.

Peter J. Stavros, who wowed “Ten-Tucky” audiences in 2017 with “Squirrels in a Knothole,” a dark comedy about squirrels watching cubicle workers, is now back with “Geese,” directed by Katye Heim. The main character is one of those workers (Corey Music). And his grudge against the geese who colonize his parking space leads to bloody trouble for him and his long-suffering wife (Nicole Doty Heumann).

In Clare Hagan’s exquisitely imagined “The Shadow Barista,” a parade of obnoxious customers (Spalding, Ellie Archer and Corey Music) cannot shake the cheery smile from the face of Heumann’s surface barista. But Jake Beamer (sporting brilliantly styled coiffure) brings her inner rage and indignation to the surface, and, as directed by Watson, the interplay between surface and shadow barista is enormous fun.

Nick Potter’s “One Last Thing Before We Go” is an ingenious piece of comic gadgetry. It features multiple murders, ghosts and one amazing plot twist. You just have to see it. The cast, directed by Music, revels in the fun: Potter, Watson, Heumann, Lee Stein and Music.

Hannah Rodgers’ “Writers Block” is chilling and dark, but it’s also an illuminating investigation of the ways we invent self-justifying narratives for our own evil ­— with a focus on sexual assault. Director Marcy Zeigler and her cast, Ross Bowman, Taylor-Peterson, Shelby Fogarty, Shelby Simpson and Lance Humbert tackle this with gravitas and authority.

“The Legend of Link,” by Music and directed by Robert Thompson, is another fairy tale riff. A feminist Princess (Meghan Logue Holland) confronts a common fictional dilemma. She’s being held prisoner by a demon bent on seduction (Watson). But when a rescuing hero arrives (Stein), it turns out that he’s not much better. •