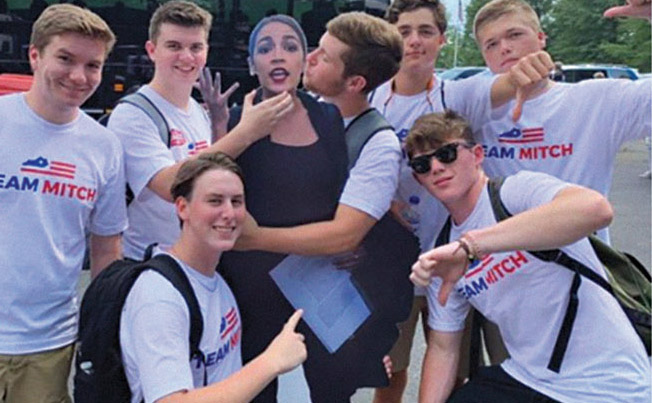 Don’t Jump On Hate Bandwagon Over Boys In AOC Photo, Use It As A Teachable Moment

By Sibby Serreno Duff  |  [email protected]
I, like many of your readers, recently viewed a photo of some local school boys trending on social media. I find myself disheartened this morning not only by the contents of the photo, but also much of the response across the country. I want to make it very clear I do not condone the activity of the boys in this photo and I am in full support of appropriate disciplinary action. I know I will likely face backlash from the following opinion, but I could not sit quietly by another day and watch the mistakes of children be used for political gain. What should be a correctable and teachable moment in the lives of these boys has now turned into something entirely different.

In the interest of transparency, I would like to note that while I live in the same community, I do not personally know any of the boys or their families. I am a mother of three children, two of whom attend the same school as these boys.

Gone are the days when young people can just make mistakes. Last evening, my brother in Baltimore spoke of his own teenage offenses but was quick to counter that none of which was severe enough to make national headlines. It is his belief that what these boys did was so disgusting, it is deserving of the wrath and judgment heaped upon them by thousands. I must remind him that most of us were raised in an era when teenage mistakes were done without the watchful eye of a little thing called social media. Thankfully, I grew up in an era when you could seriously mess up without millions knowing within hours of doing so. Only the most grievous offenses garnered national attention. One might be addressed by parents, extended relatives, coaches, teachers, church members and/or close neighbors. Rarely on a large scale or for political gain. 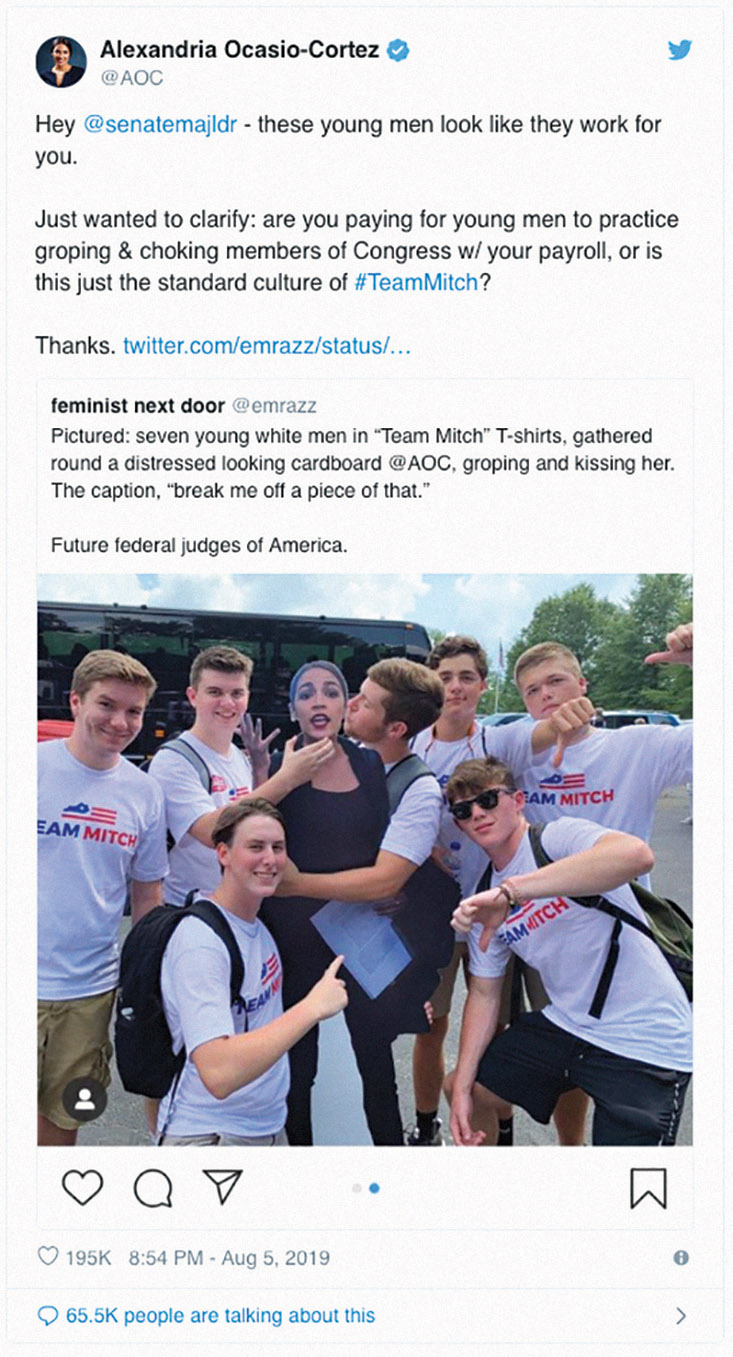 Again, in the interest of transparency, I must confess that I was a difficult teenager (just ask my mother). I said and did things that were downright horrific. I was at times a miserable, vile and unhappy person. I cringe at the mere thought of myself now. I also smoked Marlboro Lights outside of coffeehouses and planned to spend my adulthood as a poet in Paris. My point is, none of which are qualities I took into adulthood. I no longer smoke (or write poetry). While I still make mistakes daily, fortunately, with age has come wisdom. And compassion. And empathy. And tolerance. And because I require enormous amounts of grace, I try to extend that to others around me.

It is my hope that this community, regardless of your political affiliation, will rally around these boys and their families as they navigate the coming weeks. Everyone responsible for raising children, across both aisles, be reminded these kids are growing up in a time where all bets are off and everyone is fair game. They are literally living under a microscope recording every word and action. Photographing and videoing for all the world to see. Children do not understand the ramifications of living in a social media age. It is our job as adults to not only correct bad behavior in real time, but also to protect kids from future media exploitation. It’s easy to jump on the hate bandwagon. All the while believing this would never happen to your child. Don’t be so fooled. Please know that any one of us could find ourselves in a similar position. •

This column first was published in the Lexington Herald-Leader.

Sibby Duff of Lexington is a wife and mother of three. She has been a neonatal nurse practitioner for the past 10 years.

What Those Boys Need? Consequences

By JoAnne Sweeny  |  [email protected]
How many pleas for mercy must I read when young, white men misbehave?

The latest is a plea from a mother of schoolmates of the boys (wearing T-shirts supporting U.S. Sen. Mitch McConnell) who were photographed groping and choking a life-size cutout of Alexandria Ocasio-Cortez at Fancy Farm picnic in August, a major annual political event in Kentucky. In the article, the author argues that these boys don’t understand how, due the permanence of online photographs, their childhood mistakes will haunt them forever. After assuring the reader that she believes that what they did was wrong and should be punished, the author asks for the community to rally around the boys and their families to “protect kids from future media exploitation.” As she points out, this photo could happen to any of our children.

On that point we agree; no parent should think that their child couldn’t possibly engage in embarrassing, ill-conceived, offensive or even criminal behavior. Any teenager is capable of behaving badly and then stupidly posting it on social media where it can become viral. I have a son. That could be him in a few years. But when I saw a photo of those boys, I did not fear for my son. I felt disgusted at what those boys were doing: their smug expressions, blatant disrespect for a member of Congress and, most of all, the choking gesture. Any fear I felt was for our society that teaches those boys that what they were doing was funny. If I ever saw my son engaging in that behavior, he would be the one who felt fear. Of me and the verbal beatdown he would receive for his blatant misogyny. I hope I am teaching him better, and I would feel like a failure if he ever acted out in that way. But I would not send a plea for mercy for him; I would want him to face consequences for his actions.

That’s what those boys need: consequences. The backlash, social ostracism, school discipline and whatever else they face should follow them and should make their lives harder. Boys who think that it’s funny to pretend to choke a woman clearly haven’t had it hard enough.

Any pleas to “think of the children” in this scenario are tinged with the very misogyny that teaches those boys that it would be OK (funny, even!) to post that photo publicly. Taking the man’s side in a gendered conflict — those boys vs. Alexandria Ocasio-Cortez — is textbook “himpathy,” a term coined by Kate Manne in her excellent book on misogyny, “Down Girl: The Logic of Misogyny.”

Himpathy is rampant in sexual assault cases. You can see it in Brock Turner’s six-month sentence, a sentence set so low because the judge thought that a long prison sentence would have too severe of an impact on him. In recent a similar case, a judge refused to try a 16-year-old as an adult in a rape case due to the boy’s good family, good school and college prospects. These judges looked at the criminal defendants — young men accused (or convicted) of sexually assaulting young women — and sympathized with them and worried about the impact on their families and their futures, instead of thinking about justice for the victims. The fact that these were white boys from affluent families cannot be ignored; racism in sentencing young black men is well documented.

As with the mother noted above who wrote so elegantly about teaching boys to do better, judges who are confronted with young men accused or convicted of crimes against women often see themselves or their own sons in the eyes of the defendant. They want to help them, not send them away. They see those boys as being mistaken, foolish, thoughtless but not criminal. How can a young man who has a female friend who has vouched for his character be a sexual predator (despite a jury verdict)? How can a good student have really understood what he was doing when he videoed and shared the footage of himself raping a fellow student? And surely his victim would not have pressed charges if she had understood that doing so would “destroy his life.”

“Rallying around” those boys at Fancy Farm is just the first step down a slippery slope of excusing young white men for their boorishness, chauvinism, thinly-veiled violent threats and, potentially, later violence toward women. We are teaching these boys that it is OK to demean women when we rush to protect them from their earned criticism. We create thriving environments for Brock Turner, Connor Betts and Elliot Rodgers and then act shocked when they finally act out their misogynistic tendencies that we have been excusing for so long.

We need to stop thinking about how hard it will be for our white sons to face real-world consequences for their actions. Judges, politicians and even mothers need to stop thinking about what these boys are going through and start having empathy for their victims, the ones who are actually suffering. The boys will be fine; they have plenty of people looking out for them. If we really want to help them, we need to allow natural consequences to show them the error of their ways before its too late for them and their victims. •