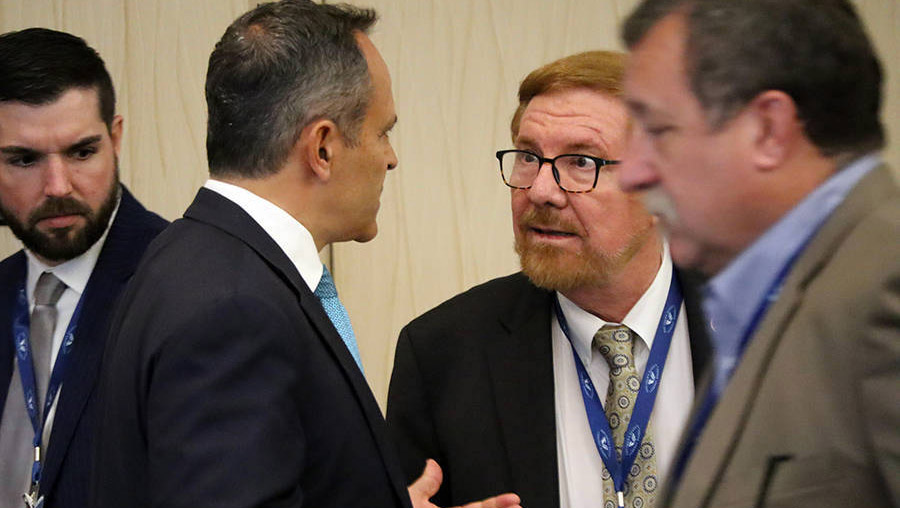 [This article is from InsideClimate News.]

The contrast could not have been greater between the political and economic conversations at the Southern States Energy Board meeting in Louisville on Tuesday and Wednesday and the global chorus of urgent calls for action on climate change at the United Nations in New York.

While dozens of world leaders committed at the UN to reduce their greenhouse gas emissions, here at Louisville’s opulent Seelbach Hilton Hotel, officials from more than a dozen Southern states huddled up in a fossil fuel bubble that blocked out the sense of urgency found in the scientific consensus on climate change.

More than 100 lawmakers, state and federal bureaucrats, representatives of the oil, gas and coal industries and two governors from the region attended a program with speakers who urged states to relax environmental regulations as much as possible while the fossil-fuel friendly Trump administration is still in power — and to never apologize for supporting burning coal, oil or gas.

The meeting was sponsored by oil, gas and coal companies and electric utilities — including American Electric Power, Duke Energy, Marathon and Phillips 66, as well as petrochemicals giant Koch Industries.

Chris Skates, a top energy advisor to Gov. Matt Bevin, said he figures he helped emit millions of pounds of carbon dioxide in a 30-year electric utility career, adding “and I am damn proud of it.”

The 59-year-old Southern States Energy Board has a mission to “enhance economic development and the quality of life in the South through innovations in energy and environmental policies.” It helps members develop and influence state energy policies, makes recommendations to the federal government, all with a very close connection with its energy industry partners who helped pay for the conference and provided speakers.

There was a sense of defiance in the hotel’s meeting rooms. While young activists have been pushing the world to transform economies to reduce greenhouse gas emissions, the message here was: don’t listen to those climate strike children.

Bevin, a Republican and the host of the meeting, was dismissive of 16-year-old Greta Thunberg, calling the young Swede who has inspired a global climate movement and who spoke at the UN on Monday, “remarkably ill informed.” He and other speakers at the conference tried to cast doubt on mainstream climate science. They said they needed to get their fossil fuel message into the schools to influence children.

The contrasting conversations around climate change are “very striking,” said Indiana University professor David Konisky, whose research focuses on U.S. environmental and energy policy and politics. He did not attend the energy board meeting but was familiar with its agenda.

“Climate change has emerged as a campaign issue in a way we have never seen before,” a result of a “combination of the urgency of the problem and the demands of the Democratic primary voters, who are really asking the candidates to adopt very specific plans to address the problem.

“But then there is this parallel conversation happening, which ignores the science, ignores the urgency of the problem but really is about survival and how to carve out a short-term future for fossil fuels,” he said.

“Polarization is really everywhere through the political systems,” said Megan Mullin, a Duke University associate professor of environmental politics. “These conversations don’t even have the same people in the same room.”

The energy board is comprised of governors and lawmakers from Alabama, Arkansas, Florida, Georgia, Kentucky, Louisiana, Maryland, Mississippi, Missouri, North Carolina, Oklahoma, South Carolina, Tennessee, Texas, Virginia, West Virginia and Puerto Rico and the U.S. Virgin Islands. The board takes policy positions and makes recommendations to local, state and federal governments and has been involved in helping to develop carbon capture and storage technology.

The meeting’s agenda largely reflected the sentiments of its host, Bevin, a businessman-turned-politician who is up for reelection as Kentucky’s governor in November. He has a confrontational style like President Donald Trump, who has campaigned for him.

Bevin has made clear that he thinks little of climate science, once dismissing it as “fluff and theory.”

“What we grew up with as weather is now climate change, and a cause for alarm,” the governor said Tuesday.

Global temperatures have been rising with increasing greenhouse gas concentrations; heat waves and extreme weather have been worsening; and basic physical science points to the growing risks. Those risks from the burning of fossil fuels have been known for decades — Exxon’s own scientists warned the oil giant’s executives about them in the 1970s.

Last November, the U.S. government’s climate scientists warned that threats to human life, property and ecosystems from global warming fueled by fossil fuel burning were rising, along with risks of economic damage from extreme weather and sea level rise. The UN’s Intergovernmental Panel on Climate Change has said global carbon emissions need to get to net zero around 2050 to keep global warming within internationally agreed limits; and to reach that goal smoothly, emissions will have to start dropping well before 2030.

Only one other Southern governor attended, Oklahoma’s Kevin Stitt, another businessman-turned-politician.

“Weather changes, yes,” Stitt said. “It doesn’t mean it’s an existential threat. What does that even mean?”

Wyoming Gov. Mark Gordon came as a guest. His state tops the nation in coal production, and he called for policies to “reinvigorate old coal plants to be part of the climate solution,” without elaborating.

Kentucky lawmaker Jim Gooch, a Republican, talked about cracking down on pipeline protesters. He defended a bill he filed that would make acts of civil disobedience against pipeline operations in Kentucky a felony. It would be like a wave of similar laws passed by other states that critics say block free speech.

“So much of the people who are protesting are so emotional,” Gooch said. “It can get violent. We can’t have that.”

Most of the electricity generated in the United States still comes from fossil fuels, but the mix is changing. The Energy Information Agency forecasts that the share of U.S. electricity generation from coal will average 25 % this year and 22 % in 2020, down from about 50 % in 2005, as cheaper natural gas and renewables rise.

Speakers at the conference raised fears of rolling blackouts unless federal policies are adopted to make sure “baseline” power from coal remains part of the energy mix.

However, a Department of Energy study from 2017 found that “numerous technical studies for most regions of the nation indicate that significantly higher levels of renewable energy can be integrated without any compromise of system reliability.” The Congressional Research Service in June found that electric reliability had been stable or improving from 2013 through 2017. “Questions remain, however, about maintaining reliability if generation from wind and solar should increase above current projections, as some members of congress have supported.”

The Federal Energy Regulatory Commission is studying the resilience and reliability of the nation’s electrical grid, said Neil Chatterjee, the commission’s chairman and a former advisor to Senate Majority Leader Mitch McConnell.

If coal power plant retirements are a threat, FERC will look for some solutions, he said.

Former Environmental Protection Agency Administrator Scott Pruitt, a Kentucky native who made his political career in Oklahoma and who resigned from the Trump administration amid ethics scandals, received a standing ovation at the conference.

He said the nation is locked in a debate over “what is true environmentalism?”

“One segment of our country is saying ‘keep it in the ground,’” Pruitt said, in an apparent reference to oil, gas and coal. “That’s prohibition,” he said, and argued there is no language in federal laws to provide for that.

That sharp divide “is ultimately the problem,” said Konisky, the Indiana University professor.  To reach some climate solutions, “we need these two sides to come together.”

James Bruggers covers the U.S. Southeast, part of ICN’s National Environment Reporting Network. He came to InsideClimate News in May 2018 from the Courier Journal, where he covered energy and the environment for more than 18 years.

James can be reached at [email protected]