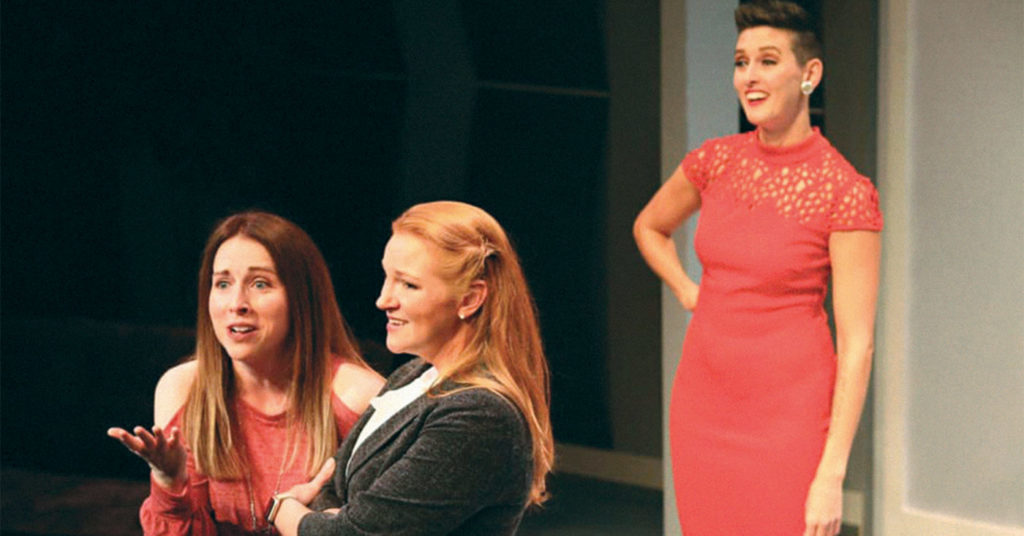 Most parents believe their child is special, but what if they could ensure — at conception — that they had an exceptional child? The idea of sperm banks and even profiles on sperm donors to get a sense of personality and genetics is nothing new to our modern world. But Bob Clyman’s play, “The Exceptionals,” directed by Tony Prince and put on by The Liminal Playhouse, takes the concept a few steps into the future and shows just how unsettling it might be.

Enter two mothers: Gwen (Heather Green), a tight-laced and socially uncomfortable scientist and educator; and Allie (Katie Graviss Bechtler), a laid-back, stay-at-home mother and lover of romance novels. The two don’t seem to have very much in common, except that they and their children are part of the same experiment. They were sorted into a group of “platinum moms” and chose sperm donors with the keenest minds, looks and, of course, best genetic make-up. The results were two exceptionally gifted sons: Gwen’s son, Ethan and Allie’s son, Michael.

Now, their new doctor, Claire (Mandi Elkins Hutchins), informs them of a school that’s been formed for only children in this program — they’ll accept 12 children, and Ethan and Michael are both candidates.

The strength of the show, besides the thought-provoking nature, is in the relationship between Gwen and Allie and the messy nature of the characters. The dynamic begins antagonistically and, in some ways, that only grows as they seem to be pitted against each other, vying for a place in the school for their children. It felt like the classic conflict of two mothers with very different styles trying to exert that their way of mothering was the “best.” Of course, in this setting, that was taken up a notch.

Their relationship is never perfect. I didn’t leave feeling that they would be best friends, but I did feel as though two very different people gained an understanding of each other and formed a bond, and it was explored in a fascinating way.

It was done so because of the nuances of the characters. In fact, ironically, while they seem to be striving for perfection in their offstage children, the characters we saw on stage were deeply, sometimes uncomfortably flawed.

Take Gwen, who does her best to present herself as a woman who has everything together. It didn’t take long for her flaws to come through: She’s rigid, insecure and explosive at the idea of having to loosen her grip on Ethan. In her least flattering moment, she’s even shown to completely cross boundaries and manipulate her child in sending personal voice recordings to his sperm donor.

Meanwhile, Allie and her husband Tom (Eliot Zellers) fight constantly. Tom is not “exceptional.” He’s between jobs and pompous due to a sense of needing to prove himself in an intellectual setting, and he has a massive chip on his shoulder about the experiment. Allie, who is exceptionally smart, constantly makes less of herself to accommodate him and other people — though, contradictorily, she also delights in proving Gwen wrong when she feels patronized to.

Only Claire seems unblemished, but Hutchins plays this immaculate persona with sharp edges. Throughout the show, I could feel warning bells going off whenever the experiment was explained, but it was sometimes difficult to pinpoint exactly why, especially in scenes with Allie, the more reluctant of the two “platinum” moms. If Allie and Tom weren’t able to have children, why shouldn’t Allie look for a sperm donor with good genes? And maybe Tom wasn’t being very supportive. At least Claire asked Allie what she wanted to do. But the more she repeated statements of “what you really want,” the more it felt more like coaching and manipulation than insight.

Then, of course, came the speech that the audience could feel coming from the beginning, in which Claire explained how with their experiment and worldview, the “genetic haves” would continue to advance, while the “genetic have nots” would fall behind. Claire delivered this monologue alone in the waiting room, chillingly juxtaposed to Claire and Allie in her office as they watched a video of their sons playing together. The lights stayed up on both scenes throughout. I could see in their faces how they were being won over by the idea of sending their children to the school, won over by the experiment all over again. In their scene, the end of the show seemed to imply that ultimately, it’s about what’s best for the child, not the parent. Meanwhile, in the waiting room, Claire spouted a manifesto for eugenics.

I left the show unsure what I thought about the ending, but deeply unsettled and sure I would be thinking about it for days to come. And as fans of the local theater scene know, that’s kind of The Liminal Playhouse’s wheelhouse. •