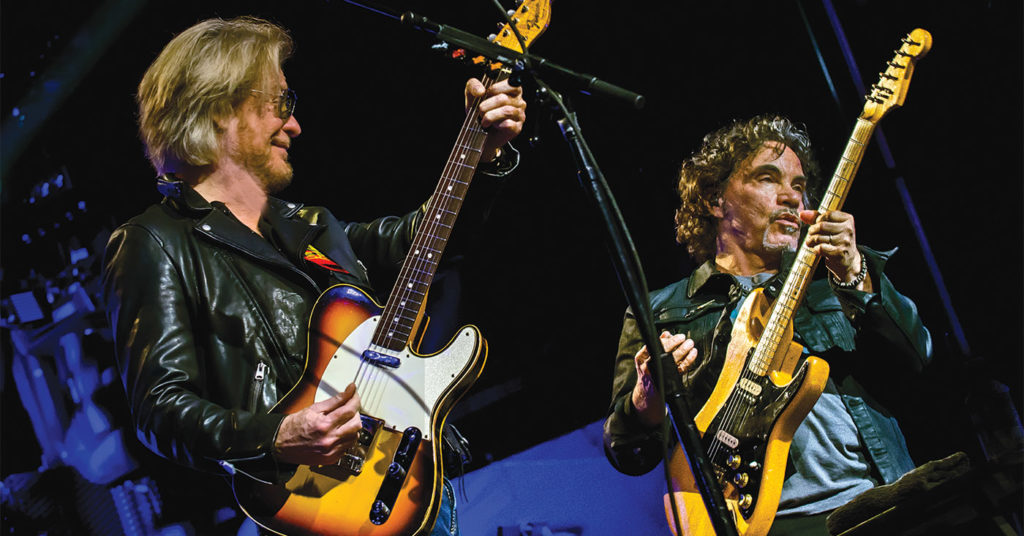 Working collaboratively to become the most celebrated duo in rock and roll history, Daryl Hall and John Oates have kept busy these last five decades, mainly by fashioning singles that were ready-made for the Billboard Hot 100 charts. Among that act’s staggering number of hits are ubiquitous tunes such as “Kiss on My List,” “You Make My Dreams,” “Private Eyes,” “I Can’t Go for That (No Can Do)” and “Maneater.” It is all the more impressive to consider that this peerless pair of hitmakers also found time to assemble an assortment of adventurous albums and to tour with a range of people, including Stevie Wonder, David Bowie and even Cheech & Chong. We recently caught up with Oates by phone to discuss his new Nashville connections, his literary ambitions and the current run of shows that lands him (with Hall) in a headlining slot at this year’s Bourbon & Beyond.

LEO: In the spring of 1985, you and Daryl were invited to re-open the historic Apollo Theater with a special concert that resulted in your now-classic live album. At the time, this seemed to signal that, despite sitting on top of the pop-rock heap, you were really part of another lineage in American music. Is that an accurate assessment?
John Oates: Definitely. And that was a very impactful event for me, too, because one of the first times I ever played with Daryl, he ended up taking me, after our own gig in Greenwich Village, down to the Apollo for a Temptations concert. He actually knew those guys personally, so we were admitted through the backstage door, allowed to hang out with the band and then seated for the performance in the very front row. Being back in that room and having Eddie [Kendricks] and David [Ruffin] join us onstage for that show in ‘85 was a mind-blowing moment during which I, for real, had an out-of-body experience and found myself looking down on the seats in the audience that we had occupied almost 20 years earlier.

When did you also become so interested in Americana music?
You know, I grew up without musical borders. I was into Chuck Berry, Little Richard, Elvis Presley, Son House, Brownie McGhee, Doc Watson, Mississippi John Hurt, Sam & Dave and the Temptations, all at the same time. To me, great music is great music. But, for the last 10 years, I have been based in Nashville, which is a place that happens to have an incredibly vibrant Americana scene. Sam Bush befriended me first, and then I suddenly found myself surrounded by all the other A-list players in town. Just being around people like Béla Fleck and Jerry Douglas has really made me step up my game in terms of musicianship.

Hall & Oates has been an experimental outfit from the beginning. This is something that was not lost on your friend Andy Warhol or makeup artist Pierre La Roche. Why do you think that aspect is lost on most casual listeners?
Except among our super-hardcore fans, that side of the story isn’t getting told, and it’s because of the hits. There were so many, and they were so massive that they overshadowed everything else we ever did. They still turn up in movies, on the radio and in television commercials 40 years later.

There was one late ‘70s session that even featured George Harrison on guitar. How did that come about?
Well, George and I had become friends through our mutual love of Formula One racing. I’m a bit of a fanatic when it comes to cars, and I mostly knew him from that other context. But he ended up joining us in the studio one time when he was hanging around LA. It was on the condition that he would simply get to be in the band, without receiving any special attention. He was really sweet about it, and it was a lot of fun for us.

Your memoir, ‘Change of Seasons,’ has been a huge success. Was the process of chronicling your life in book form somewhat surreal?
It really was. The more I dug into the past, the more my life opened up to me, and I kept wondering how so much could have possibly unfolded over the course of one single lifetime.

It sounds like some exciting things are still happening for you. Are you going to have to take a cue from Johnny Cash or David Crosby and end up writing two distinct autobiographies?
Nah. I think the one will do. However, at some point, I would like to write a story about everything that has happened to me in Nashville over the last decade. Maybe that could be for an expanded edition of the book, I don’t know.

Now that you have effectively outlived MTV, the album era and even traditional radio, what do you make of the music business these days?
We don’t have to worry about that kind of stuff. The band that Daryl and I lead is primarily concerned about connecting with live audiences. For us, at least, that’s always been the most enjoyable part of this profession, and I can tell you that, as far as touring goes, business is good.

Is there anything that ever surprises you as you are playing your extensive body of work, night after night?
What surprises me most, and I mean this in a good way, is that people still want to hear those songs. It’s a joy and an honor to play them, especially for the younger generations. We’re extremely fortunate to have created such a rich musical legacy of our own that still resonates with listeners, even after all this time. •