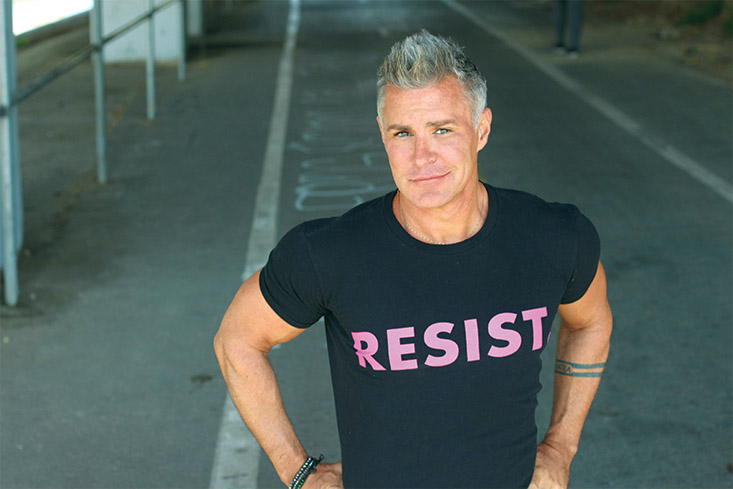 That’s not the kind of heckle I’m used to hearing. Megan W. Cottington was on Purrswaytions adorable stage, doing a bit about adolescent crushes, and an audience member couldn’t keep her feelings to herself.

Normally, heckling is discouraged. It throws us off our game as comics, disrupts our rhythm. And, usually, it’s negative, argumentative or disrespectful. Heckles are never good, but as far as they go, this was as good as it gets.

Directly in front of the stage were three bears — no mama or baby in sight, just three daddy bears. As queer comic after queer comic took the stage, they voiced agreement and affirmation so much that one performer asked them to introduce themselves, and several subsequent ones addressed them by name.

People came out to the Midwest Queer Comedy Festival last month who clearly don’t often go to comedy shows.  No one got bent out of shape at the call-and-response style parts of many shows took. Everyone just rolled with it, played with it.

Over the course of five days, more than 50 comics from the U.S. and Canada took the stage for 25 live comedy shows and podcast recordings at The Bard’s Town, The Caravan, Aloft, Kaiju, Purrswaytions and Play. The quality was outstanding. I was compelled to watch show after show, even as my energy flagged so much that my laugh was coming out froggy.

Dwayne Duke, the fest’s executive producer was everywhere all the time. I might be about to drive a comic to their venue (I was a co-producer), and he’d pop up saying he was already going there. He’d check out the room before almost every show — hop up onstage and introduce a show at the Caravan, then get to the Bard’s in time to close another. His vibe was proud and exhausted, making jokes about the cost of the fest, his credit card balance, and not having to go to the gym because another comic was giving him workouts.

Louisville is no hotbed for queer comedy. There are only a handful of local comics who identify as LGBTQ. As a genderqueer comic who puts that front and center in my work, I always feel a bit of an outsider. As a trans masculine person who’s into men, very often I feel outside of LGBTQ culture. I’m in a small minority, constantly surprising LGBTQ and cis, straight people by not being a lesbian.

MQCF included comics from almost every part of the rainbow: bisexual and pansexual, non-binary and trans, lesbian, gay, queer, black, Asian, Latino, and white. We didn’t have an ace up our sleeve (there were no asexual comics as far as I know), but there was a wealth of intersecting perspectives and loads of laughs.

As someone who feels fringy no matter where I go, I felt accepted and a part of something great. Friendships were being struck up all over the place. So many of us made adjustments and asides about not having to explain things for a queer audience.

On Saturday, Aug. 23, Tony Tripoli, who was co-executive producer and head writer on Joan Rivers’ “Fashion Police” and who opened for her for years, gave a talk  at The Caravan about writing for television. He told the story of his success with humbleness and humor, with tangible advice for success mixed in.

“What if I don’t have experience?” someone asked.

There was more to it than that, but you weren’t there, so that’s all you get.

After, during lunch, Tripoli let comics take photos with Joan Rivers’ cremains. If anyone had asked a Louisvillian where to eat, we probably wouldn’t have ended up where we ended up for lunch, paying dearly to swelter al fresco over mediocre fried chicken. The only similarity between its SM bar namesake in San Francisco was that it was a kind of torture.

After driving Tripoli to his hotel, I helped set up for Gender Fluids at Kaiju. Ava Smartt and Arielle Isaac Norman describe their podcast as diving “into everything from birthing fetishes to what misgendering dogs says about our society.”

Norman ran a mic beforehand to try to get folks out to watch the show, but true to form, most comics got their stage time, slipped out and missed hearing about how someone called Smartt, a trans woman, an abomination on Grindr.

“It was so hot,” she said. “It’s like the most metal thing you can get called in bed.”

Then, it was off to Purrswaytions for Strip Joker, a Chicago-based show where comics strip off. Pittsburgh’s Joe Esch had tape over his nipples in solidarity with local, gendered nudity laws. The strips of tape made narrowed eyes in a Sharpied face. His belly button was smoking a joint.

The afterparty was at Play, but the out-of-towners appreciated Purrswaytions cheap drinks and the fact that we had the run of karaoke. I stood outside (my middle-aged ears made having a conversation inside impossible) and looked through the windows to see Matt bring up comic after comic to sing their hearts out. Apparently, there’s no such thing as enough stage-time.

We might have wished for more people to turn out, but the second MQCF was a blast, and a revelation for folks who had a chance to catch the shows. If you missed it, you’ll have to get to Chicago to catch the next one.

Reed Sedgwick is a Louisville comic and co-producer of the Midwest Queer Comedy Festival.