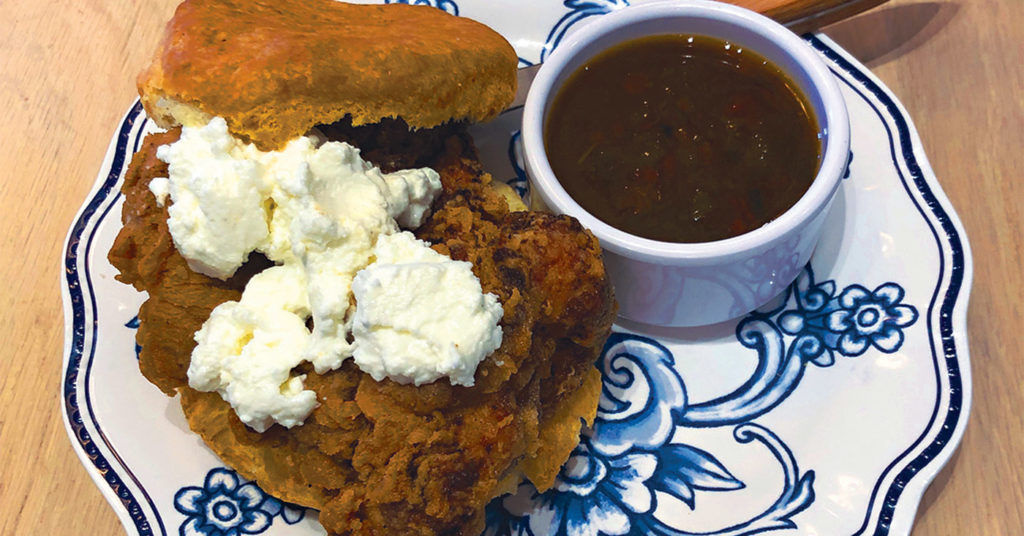 Fried chicken on a biscuit with Capriole goat cheese? That’s the G.O.A.T. at Biscuit Belly.

“The next wave of hot restaurants could be a basket full of biscuit concepts,” the trade journal Restaurant Business Magazine prophesied in 2016, focusing on Cracker Barrel’s planned biscuit-eatery spin-off Holler & Dash.

And for about a year now, Louisville’s own Boujie Biscuit in Clifton has been delighting diners with its oversize, towering, square biscuits.

But now we know it’s trendy because biscuit dining has arrived in NuLu! Say hello to Biscuit Belly, a spot so popular that its brunch-hour crowds line up around its Main Street block.

The menu is biscuit-driven, of course, with 20 dishes created by Biscuit Belly’s team of Chad Coulter and Tavis Rockwell, the minds behind Louisville’s LouVino restaurants.

Even one of the four appetizers, the $10 Gravy Train, is built on a pair of biscuits; the others are praline donuts or loaded tots (both $7) and pancake corn dogs ($8).

Ten biscuit sandwiches range from $8 (for a biscuit with egg, cheese and bacon or sausage) to $20 (for the massive Belly Buster loaded with fried chicken, sausage, bacon, brisket, cheese, mushroom gravy and an egg). Four biscuit-and-gravy dishes are $8 (for s’mores with chocolate gravy) to $11 (for a Hot Brown biscuit with goetta sausage gravy).

You don’t want a biscuit? Really? All right, then — you’re covered with a half-dozen Not A Biscuit options, priced at $7 (for spinach salad, oatmeal or French toast) and $8 (for pancakes or hash browns and onions).

Many ingredients are locally sourced; vegetarian and gluten-free options are clearly noted, and you may substitute tofu for the protein in any sandwich.

We tried two biscuits and were completely satisfied.

The G.O.A.T. biscuit sandwich ($10) lived up to its namesake, stinging like a bee with a hefty chunk of crunchy fried chicken thigh and floating like a butterfly with dabs of earthy, Capriole goat cheese. The biscuit was large and flaky, with buttery flavor coming through in every bite. We ordered sweet pepper jelly on the side. It was sweet as expected and deliciously peppery but not overly hot, with a distinct but subtle back note of mild green chile peppers.

The Edgy Veggie sandwich ($9) joins the ranks of Louisville’s top meatless dishes with its mouthwatering ingredient combo. It stacks a soft over-easy egg, Kenny’s cheddar cheese and a fried green tomato on a similar biscuit and bathes it all in a thick, brown gravy made with mixed mushrooms from Simpsonville’s Frondosa Farms.

Who knew that two biscuits (with all their trimmings) made such a filling lunch? Biscuit Belly does! The toll for two was $22.79, plus a 20% tip calculated at the point of sale. •

Noise level: It was buzzy but not deafening on a busy week day. (Average sound was 68 decibels, approximating normal conversation, with spikes to 84 decibels, akin to a diesel truck driving by 50 feet away.)

Accessibility: The restaurant and restrooms are fully accessible to wheelchair users.

Speaking of biscuits, we stopped by Gracious Plenty’s Prospect location on a Saturday recently with our friend Ann, and I was pleasantly surprised to discover its weekend-only brunch menu.

Briefly told, the brunch menu offers the usual suspects — eggs, bacon, sausage, pancakes and waffles and French toast — with nothing clocking in for more than the $9.99 Derby Lover Feast with three eggs, two biscuits with gravy, bacon or sausage, cheese grits and a pancake! Brunch beverages are on the menu, too, including a bloody mary or tequila sunrise for $8 or a mimosa for … wait for it … $1!

An à la carte order of well-made scrambled eggs, thick bacon and extra-cheesy grits made a filling breakfast; so did a build-your-own quesadilla ($8.99) stuffed with scrambled eggs, cheddar, mushrooms, onions and cilantro, with avocado on top.

A regular-size biscuit was fluffy and tender, not flaky nor crumbly but just right, with plenty of butter. The tab for three came to a thrifty $31 plus tip. •

Noise level: Our party of three had no difficulty carrying on a conversation. (Average sound was 72 decibels, comparable to living room background music, occasionally peaking to a shrill 91 decibels, akin to a nearby motorcycle.)

Accessibility: The shopping center space is accessible to wheelchair users, but front-door thresholds have a bumpy concrete fill that could require a strong push to bump over.