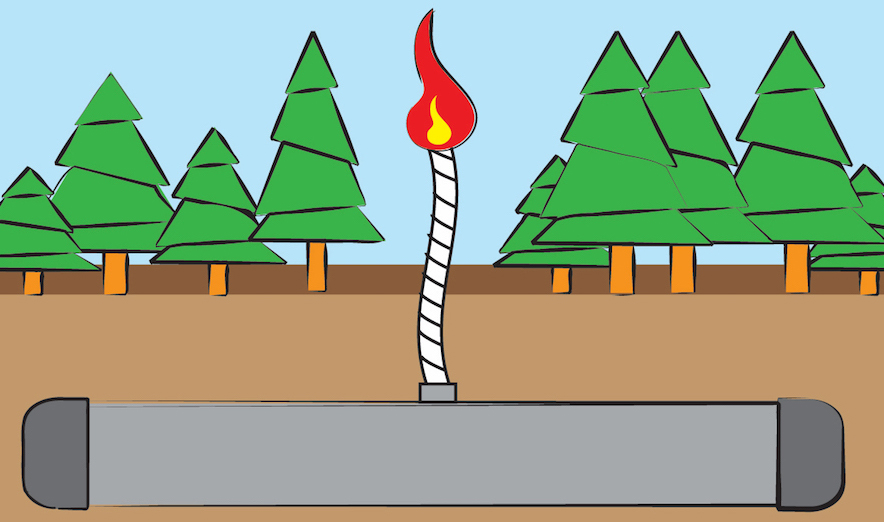 Bernheim Arboretum and Research Forest’s lawyers are fighting hard to stop two projects that threaten its woodlands, but it also has a secret weapon that it hopes will start making an impact soon: You.

There are several ways for you to help fight the Louisville Gas and Electric Co.’s natural gas pipeline and an Interstate 65 and 71 highway connector that could cut through Bernheim’s Cedar Grove Wildlife Corridor: Attend a Bernheim Under Threat Roadshow session, mail a letter to LG&E or Kentucky Transportation Cabinet officials and sign a petition.

“The idea is everybody has value with their voice, and the more people who speak up, the better our future will be,” Mark Wourms, Bernheim’s executive director, told LEO.

LG&E has said it needs to build the pipeline to keep up with natural gas demand in Bullitt County as industry there grows. The project would widen a 75-foot utility easement the corridor already contains for a transmission line, cutting down thousands of trees and harming wildlife in the process, said Wourms.

The Bernheim Under Threat roadshows, which are scheduled through October in Louisville and surrounding Kentucky cities, are aimed at educating people about the threat to Bernheim. But there is more: “Two is, we want to have them understand that these threats are larger than just a threat to Bernheim. They really are about what future we want Kentucky and, in particular, what future we want Central Kentucky to have — how much we should cherish and value conservation lands versus outright development,” said Wourms.

If you can’t make it out to one of the roadshows, here’s an update on what’s happening with the standoff between “progress” and preservation.

The latest news is that the Kentucky Public Service Commission has responded to a complaint from Bernheim that asked the Commission to withdraw a certificate of public convenience and necessity that LG&E needed to build its pipeline. Bernheim alleges in the complaint that the utility should have submitted a separate application to obtain the certificate. Instead, LG&E had folded it into a request for a rate increase.

The Commission has asked Bernheim, along with the Kentucky Attorney General’s Office and LG&E, to submit briefs regarding their “issue of standing,” said Andrew Melnykovych, a spokesperson for the board. State statute requires that, to intervene in a case, Bernheim must have had “an interest” during the approval process in property that would have been impacted by the pipeline.

“If you’re not a landowner where the pipeline might be located, do you have an interest in it?” Melnykovych asked.

Bernheim bought the land for the Cedar Grove Wildlife Corridor in 2018, the year after the project was approved. But the route for the pipeline wasn’t finalized until 2019.

Wourms said he couldn’t comment on Bernheim’s legal strategy. But he objects to LG&E’s lack of transparency during the pipeline approval process. Company lawyers asked the Commission to keep proposed routes secret from the public in 2017 during the application process so that land costs wouldn’t go up and so landowners couldn’t resist the project, a WDRB story said.

Bernheim is a “public necessity” for the future environmental health of the community and the state, Wourms said. “That might not be a legal argument, but it certainly is an ethical and a moral one,” he said.

Bernheim is also fighting LG&E’s efforts to obtain the forest’s land through eminent domain, Wourms said. And, the forest has met with the U.S. Army Corps of Engineers to request that LG&E be made to assess the environmental and cultural impact of the project in order to get a license for it.

Attorney General Andy Beshear, who is running for governor, has gotten involved in the pipeline battle, too, filing a motion with the Commission to intervene in Bernheim’s complaint and to expand its scope. His office is concerned about complaints of tactics used to acquire land for the pipeline, and it says there is “no evidence” that the Commission reviewed the environmental permits LG&E needed for the project, among other things.

Meanwhile, the highway study evaluating the best route for the I-65/71 connector continues. Wourms expects the state to provide the study in December.

He is optimistic Bernheim, LG&E and the state can each get what they want. “What we believe is that there’s win-win solutions that would allow for smart development and continued economic growth and for nature to reside hand-in-hand,” he said. •