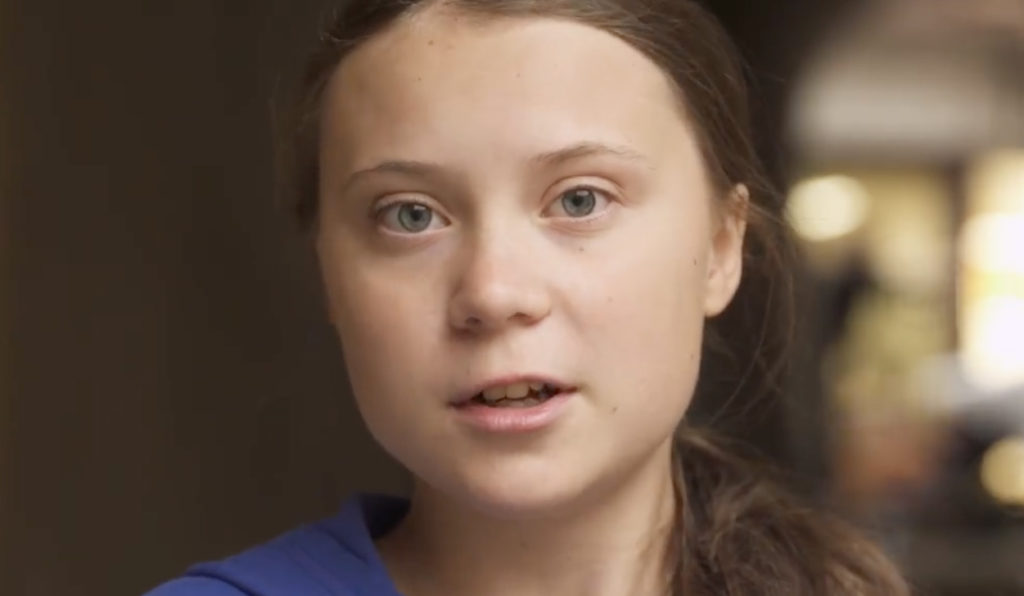 From a video for the Global Climate Strike on Friday, an image of Greta Thunberg, the Swedish teenager fighting to raise global awareness of the risks posed by global warming/climate change.

Metal Monday: Horseburner and Indighost
Highlands Taproom
No cover  |  10 p.m.
Horseburner (West Virginia) and Indighost (Tennessee) ride into town for a tour stop at Louisville’s weekly Metal Monday show. But this show might be a little different. Horseburner ascribes to the stoner metal genre, while Indighost describes itself as psychedelic rock. Either way, the tunes are sure to be heavy, and the energy? Wild.

Ann Dorzbach: 22 Miracles of Immigration
Jeffersontown Branch, Louisville Free Public Library
Free  |  7-8:30 p.m.
Ann Dorzbach is a Jewish woman who survived life in Nazi Germany. In this riveting talk, she’ll speak about how she escaped to the United States with her family at the age of 17.

Global Climate Strike
Locations vary
Free  |  All day
People across the world will walk out of work or school, or not attend at all, on Friday to call attention to the Earth’s climate crisis, and there are at least two events planned in Louisville. The Kentucky Youth Climate Strike encourages protesters to meet at Jefferson Square Park at 10 a.m. for an all-day rally. At noon, representatives will help deliver a letter to Mayor Greg Fischer’s office, where Extinction Rebellion Kentucky, will kick off its strike, which includes an attempt to slow down rush hour traffic at 4:44 p.m. and a 7 p.m. meet-up and community celebration at Bardstown Road and Baxter Avenue. International organizers say that “these Climate Strikes won’t solve the climate crisis alone. What this moment can do is demonstrate that people are no longer willing to continue with business as usual.”

Yappy Hour
Apocalypse Brew Works
No cover  |  6-10 p.m.
Bring your dog and enjoy the craftiest of craft beers at Apocalypse Brew Works — all to benefit to the Kentucky Humane Society. There will be over 30 beers available at this event, coming from a cast of 15 award-winning homebrewers, as well as from Apocalypse’s brewery. A $3 donation to the Humane Society brings you instant karma in the form of a 9-ounce sample of beer. Chow down on eats from the Hot Buns food truck while your pup enjoys dog treats. This event is brought to you by the Lagers Homebrew Club, Brewgrass Homebrew Supply and Apocalypse.

‘Rocky Horror on the Hill’
Iroquois Amphitheater
Free  |  7-11 p.m.
A transvestite scientist, a rocker biker and a hunchback butler walk into a creepy roadside mansion… Oh, and a guy named Rocky. Sure, you probably have seen cult classic movie “The Rocky Horror Picture Show” — it’s nearly 45 years old! This screening will be a bit different: Acting Against Cancer will help run a costume contest and “Time Warp” dance instruction before the movie. During the show, it will recall the day’s of the Vogue and Baxter theater screenings, with AAC’s live shadow cast acting out the movie in costume in front of the screen. There also will be a raffle, free makeup by makeup artists,“ for a $5 donation. The movie starts at 8:30 p.m.