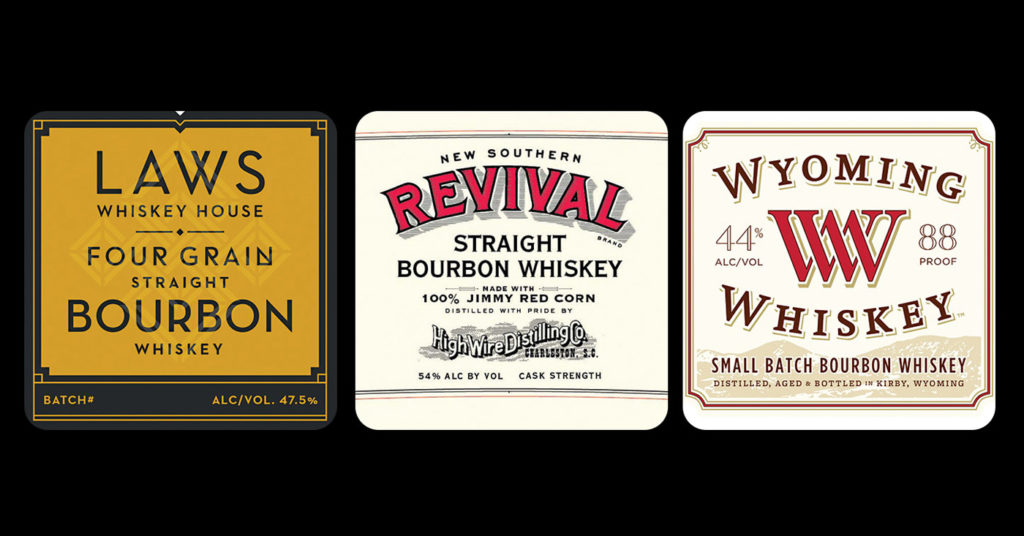 Old Forester 86 Proof, (Brown-Forman Distillers, Louisville), with notes of a rich caramel on the nose and fine leather and banana.

And Wyoming Whiskey (Kirby, Wyoming), a wheated bourbon that exhibits honey and clove on the nose, followed by vanilla and fruit on the palate.

All of them are bourbons, but only one is from Kentucky.

In the course of writing (and updating) “The Bourbon Tasting Notebook,” I took several trips around the country to pick up these bottles and many more.

Bourbon is so strongly identified with Kentucky that a lot of people (increasingly fewer, fortunately) have the impression bourbon has to be made here.

Before Prohibition, there were many distilleries producing bourbon in the Corn Belt, especially in Missouri and Illinois. Today, the vast majority of bourbon — more than 90% of the volume produced — is indeed made in the Bluegrass State, but there is at least one bourbon brand and often many more produced in every state but Hawaii. (That state has a distillery bottling a whiskey infused with pineapple, but that’s another story.)

In a congressional declaration dated May 4, 1964, bourbon was designated “a distinctive product of the United States.” Ironically, the reason Congress felt such a document was needed had roots in Prohibition. With the exception of a handful of distilleries licensed to distribute from their stockpiles and, as supplies started to dwindle, to make “medicinal whiskey,” every U.S. distillery was shuttered in 1920.

One enterprising distiller, Mary Dowling of Anderson County, Kentucky had her distillery, Waterfill & Frazier, completely disassembled, loaded on railroad freight cars and shipped to Juarez, Mexico. In Mexico, it was perfectly legal to make bourbon in the reassembled facility, now called D & W Distillery. And while illegal to transport it into the U.S., the proximity to the border was highly convenient.Not surprisingly, D & W Distillery did a booming business.

Even after repeal, foreign-based distilleries continued to make bourbon, which cost the U.S. government a lot of money. Uncle Sam couldn’t collect taxes on a product not made in the U.S. Hence, the 1964 declaration, which put D & W and others out of business. No more imported bourbon. It has, by law, to be made in the U.S.A.

The current craft spirits boom has meant that hundreds of distilleries have opened around the country. Some make only white spirits such as vodka or gin, but many make whiskey, including bourbon. It’s actually educational to compare bourbons made outside of the state to Kentucky’s finest. Blind tastings are the most intriguing, since almost always sippers can spot the Kentucky-made whiskey. By no means does that mean others are not good; they are simply different, and such a comparison tends to reinforce that a probable combination of experience, history and geography results in a particular flavor profile, similar to the diversity of whiskey styles that hail from different regions of Scotland.

Curious about non-Kentucky bourbon but don’t want to travel far?

One store where you can find a large selection of out-of-state bourbons is Westport Whiskey & Wine in the Westport Village shopping center. In addition, the tasting room has dozens more that proprietor Chris Zaborowski has collected and can offer customers samplings. Other Louisville stores, including The Wine Rack, Old Town Wine and Spirits and Prospect Party Center also have non-Kentucky bourbons, but Westport’s selection is impressive.

One caveat to your browsing: Many bourbons that at first glance seem to be from another state are actually sourced from large Kentucky distilleries or the industrial scale MGP distillery in Lawrenceburg, Indiana, which makes a variety of whiskey recipes it sells to companies that package it as their own brands. For example, careful reading of some small print on the label of Colter’s Run Bourbon Whiskey from Grand Teton Distillery in Driggs, Idaho reveals that the whiskey is “Distilled in IN. Aged & Bottled by Grand Teton Distillery.” If you see “Distilled in Indiana” on the label of another state’s whiskey, it came from MGP.

With that qualification in mind, here are 10 non-Kentucky bourbons to sample:

Beer Barrel (New Holland Artisan Spirits, Holland, Michigan): this company is well-respected in the craft brewing industry, and it uses the barrels from aging its Dragon’s Milk Stout to finish the bourbon. This imparts interesting notes of malt and chocolate to the caramel base.

Belle Meade (Nelson’s Green Briar Distillery, Nashville, Tennessee): lots of fruit supported by rich caramel. Cherries, berries, raisins and dates are all detectable. Long finish. This is a true bourbon, not to be confused with Tennessee whiskey, such as Jack Daniel’s.

Breckenridge (Breckenridge Distillery, Breckenridge, Colorado): corn and oak with a little orange peel on the nose. Vanilla notes accompanied by spices, rather than fruit. Proofed with Rocky Mountain snowmelt. By the way, it is also the world’s only “ski-in” distillery.

F.E.W. (F.E.W Spirits, Evanston, Illinois): roasted corn with peaches and cinnamon that carry through from the nose to the palate, where caramel weighs in before a spicy finish. Interesting historical note: Evanston was founded as a dry city, and this was the first (legal) distillery there when it opened in 2011. Named in honor of Frances Elizabeth Willard, a prominent temperance leader who lived in Evanston.

George Remus (MGP distillery): lots of caramel and vanilla with a medley of spices — cinnamon, allspice, nutmeg, pepper — and a long, warm, oaky finish. Yes, the behemoth MGP actually released this as its own brand. Named after the notorious Cincinnati bootlegger.

Neversweat (Headframe Spirits, Butte, Montana): spicy nose of clove and anise. Vanilla and corn on the palate with some stone fruit. Cinnamon note on the finish. Both the distillery and whiskey names are taken from mining terminology.

Starlight Straight Indiana Bourbon (Starlight Distillery, Borden, Indiana): part of the Huber’s Orchard, Winery and Vineyards complex. A little green apple on the nose is followed by dominant vanilla and apples on the palate. A barrel-proof bourbon that is surprisingly smooth.

I can also recommend three other non-Kentucky bourbons very much worth trying if you come across them in a whiskey bar or while traveling. Balcones Texas Pot Still Bourbon (Balcones Distilling, Waco, Texas) exhibits notes of chocolate, baking spices and nuts. J. Henry & Sons (Henry Farms Prairie Spirits, Dane Wisconsin) has loads of vanilla and apple, a bit like apple pie à la mode. The storied Palmer House Hilton in Chicago’s bar offers a private barrel selection of this, as well as private selections of Woodford Reserve and Maker’s Mark.  And the aforementioned Wyoming Whiskey, the wheated bourbon.

At this point, I’ve sampled nearly 450 bourbons from every state that makes one. I do suggest you embark on a bourbon journey, too.

But, please, do make that tasting trip in stages! •