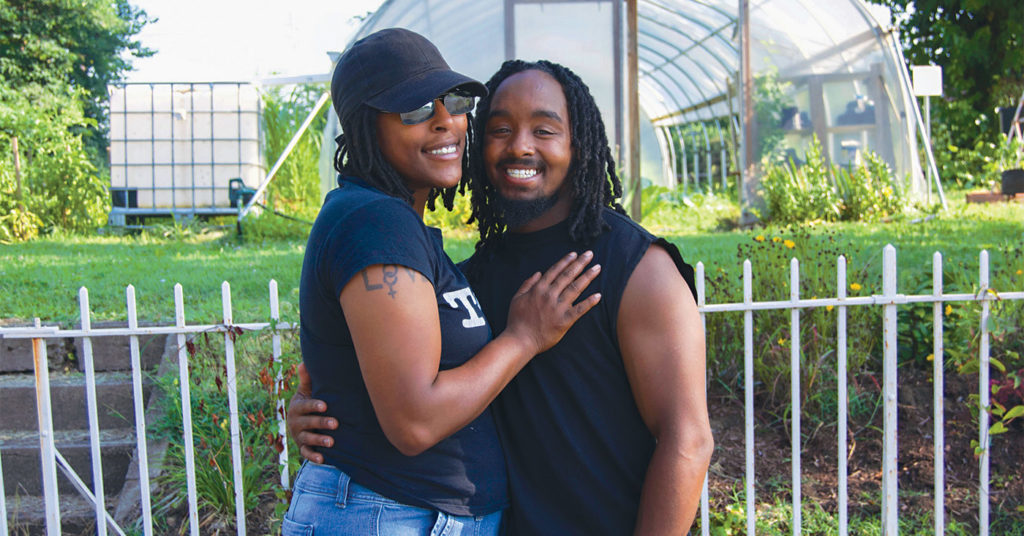 “We’ve been together for about a year and a half. It started with me getting a job at Lowe’s. When you go to Lowe’s, they give you this tour of the building. When we went back to receiving, which is where she was working, I saw her. I don’t know what it was, but she caught my eye. She’s beautiful. I thought to myself to try it out. I went in and told her my name, and she told me hers, and after that it was goodbyes. Three weeks after that, I chased her. We met up with each other, and then from that point on we went to Chick-fil-A every morning, and that’s when I knew that I was going to make this woman my wife. No female out here has done for me what she’s done. We got to eat breakfast together every morning and get to know each other, instead of jumping into other things. That’s what most men do out here, is just jumping into things. If you can, get a woman that understands you and gets to know you like the back of her hand. I’m not afraid to say it because that’s what love is. It’s getting to know each other.

I’m not gonna lie, but I took off work to spend time with her. We don’t get to spend that much quality time together. We work Monday through Friday, and we work with contractors on the weekends. The feeling I get when I’m around here is a sense of security. I feel protected, knowing that I have a woman who is on my level. That’s a lovely thing and that’s a team you’re not going to stop. We just have a bond, and I love it.”

“I saw him, and I was thinking that he was a very cute guy. I swear he was stalking me! I watched him follow me to receiving, and that’s when we got to know each other. I just thought that he was so cute. We worked two different shifts — he worked first, and I worked third. He would catch the first bus out there just to see me before I got off. He did that for three weeks. I knew that the next time that I would see him, that I would have to give him my phone number. That’s what happened, and we’ve been inseparable ever since. We didn’t and won’t give up on each other.”

“My first experience with the Dirt Bowl was with ‘Get Buckets,’ like five or six years ago. Then I went to ‘Stamped Up,’ then I went to ‘4100’ for a couple of years. I went to ‘Redemption’ and now, I’m at ‘Park Hill.’ I’m from Park Hill. I could’ve played with ‘Redemption’ this year, but Park Hill’s my heart and soul. That’s where I grew up, and I can’t tell them no.

The Dirt Bowl keeps me out the way. I look forward to playing my games. I look forward to Cornell and Ravon talking shit. It’s actually a good outlet to let out stress. I don’t do drugs or anything like that. I love to play basketball. I love seeing my friends, that I grew up with, out here.

It’s more than gun violence and stuff out here. This is a beautiful thing. The police have been on it, and people feel safe. They’re even walking people to their car if they need it. I just hope that they keep it going, and it won’t be any foolishness.

I’m kinda mad that I wasn’t born 50 years ago, when it first started. I know it was dope. I’m a sucka for finding out what was before me, and I respect what was before me. Like, I see the highlights from back in the day, and I’m wishing that I was in that era. I got an old soul. I’m sure the competition is weaker now than it was back then.

I’d love to continue the legacy. When my son gets older, I want him to play in the Dirt Bowl. Even if he gets offers from Division I schools, I still want him to experience the Dirt Bowl. You can have so many local supporters, and you gotta get your city behind you before everybody else. This is a nice way to get your city behind you and get your name out there. It’s not just for the hood but the whole city. Wherever I go, everybody knows Polo, and I support everybody. I’m a fan of basketball, and these are my friends. We hoop every day together.”