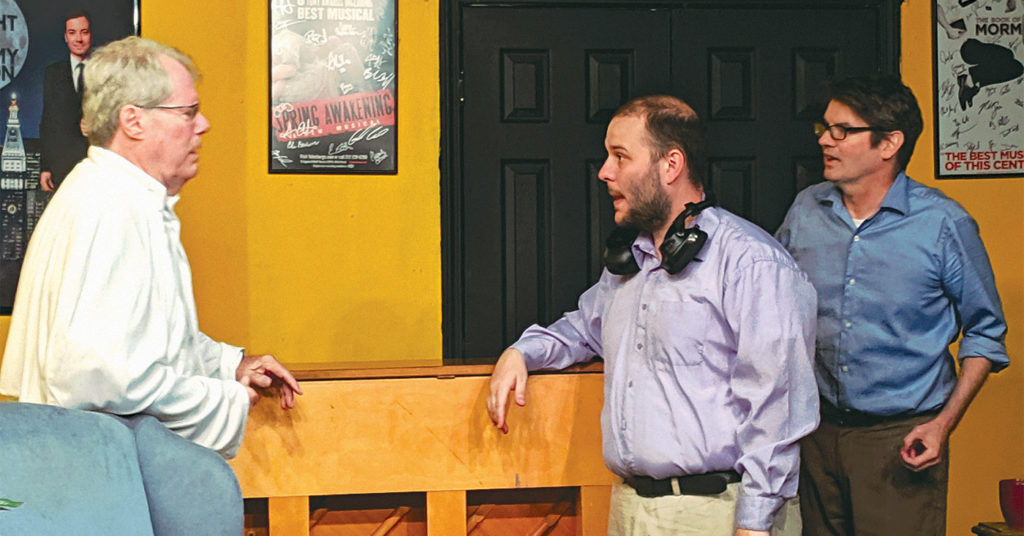 When the audience first hears two characters talking about an important guest making his way to Jimmy Fallon’s green room, we’re not sure what to expect. Even the program lists the role as only “The Guest.” I tried to parse out clues in the preceding conversation. A famous musician? A politician? The last person I expected to walk through the door was the pope.

But David Ippolito’s “The Green Room,” in its world premiere with Wayward Actors’ Company, revels in playing with the audiences’ expectations, leaving them to question their own biases and beliefs.

The play, which closed Sunday, takes place in two rooms: the green room of “The Tonight Show Starring Jimmy Fallon” and a hotel room directly across the street. In the green room, an associate producer named Marc (Andrew Mertz) and a writer named Gabriel (Greg Collier) find themselves invited to engage in intellectual discussion with… of all people, the pope (Rick O’Daniel-Munger). In the other, a fundamentalist fanatic named Darlene (Susan Crocker) and her young lover/acolyte, Matthew (Jack Marks), are preparing for a momentous event that has something to do with Fallon’s show and his guest.

Because The Bard’s Town’s stage is a smaller one, these two sets are touching, almost overlapping. The lights go down on one room while focusing on the room on the other side of the stage and reverse when the scene changes. The effect, however, only serves to highlight how connected the two rooms are — as well as the two stories.

Ippolito’s writing shines in showing the nuances and contradictions of the five characters. Darlene, for instance, is in every way the standard Bible beater, but she seems to have no qualms about having sex with Matthew to calm his anxiety in a relationship that clearly seems to be an imbalance of power. O’Daniel-Munger’s pope — who is clearly inspired by, but not a total carbon copy of, Francis — is shown from nearly the beginning to be quite different from what Gabriel and Marc expected the pope to be. He talks openly about past loves, about doubts and even about the issues in which he believes the Catholic Church to be simply wrong.

For the most part, this makes the show more thought-provoking, more human. It can also be hilarious, as in the scene in which the pope, an established lover of musical theater, sits at the piano and loudly starts to sing “I Cain’t Say No” from “Oklahoma.” The nuances of character are necessary, however, in order to tackle the topic of religion in all of its full, complicated glory. At its heart, the point of this play is that certainty of any kind when it comes to the divine is arrogance. It’s impossible to talk about religion in an honest way without making room for doubt and contradiction.

One good example starts out not as a discussion of religion but a question about the green room. The pope, looking around at the yellow walls, asks in confusion what makes the room green. Gabriel provides one answer that dates back to Shakespearean times of an actual green room in which actors waited for their cues. Marc says that its called green in contrast to the red light producers use when going live. Finally, the pope concludes that people often choose the story that brings them the most comfort. A green room is a room where guests wait before going on the show, so it’s fitting that “The Green Room” is an exercise in tension and anticipation. From the beginning, it’s clear the characters in each room are building up to something. The pope tells Gabriel, a gay man, that he has his own closet to come out of: an intellectual closet. Meanwhile, Darlene gushes about God bringing her and Matthew to New York for his will and repeatedly tells Matthew that he’ll need to keep a clear head. The pope pushes Gabriel to ask him difficult questions. In the hotel room, eyes flicker to what we believe is a jacket in a dry-cleaning bag hanging on the closet door.

Scenes become shorter and shorter between each space until they’re practically talking over one another. The pope begs Gabriel to ask him the question. Darlene explains to Matthew how she knows that the current pope is the Antichrist, and how his downfall is predicted in the “Book of Revelation” (which she mistakenly calls “Revelations,”and as someone who grew up in the Bible Belt, the error rings true). Gabriel asks: “Was Jesus the son of God?” The pope answers: “Is this room green?” As he discusses changing the church and perhaps the world with his radical doubt, Matthew unzips the dry cleaning bag… and reveals a gun.

However, the play never shows us the end. Does the pope go on live TV and admit that he doesn’t know whether he believes in the divinity of Christ? Does Matthew take the shot, and does it hit? The audience is left with uncertainty that’s a little unsettling… and just as it should be. •