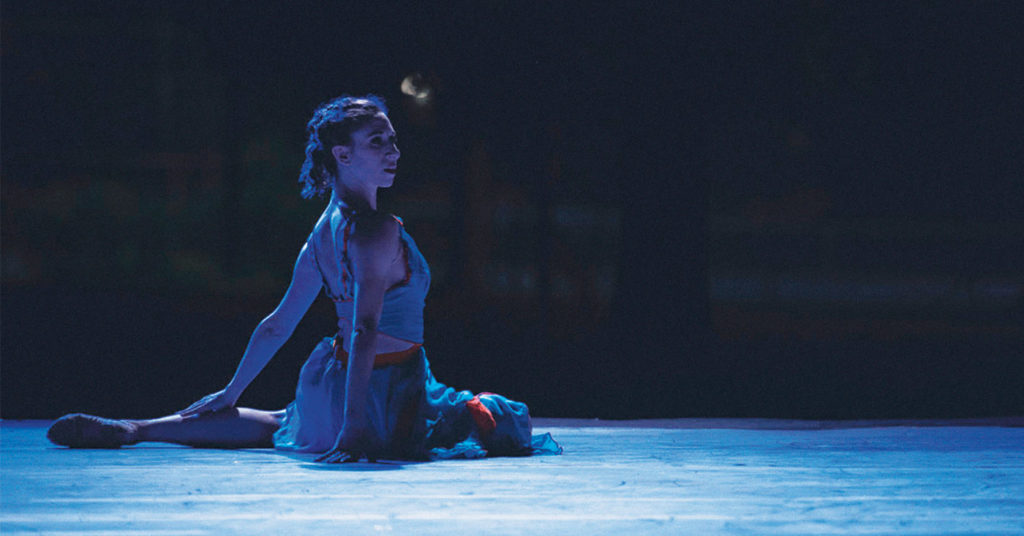 The main three shows from the Shakespeare Festival in Central Park may have ended weeks ago, but Kentucky Shakespeare still had more to offer, with the help of partnering theater groups. First, there was “Twelfth Night,” performed by Kentucky Shakespeare’s high school group, The Globe Players. Next, Cincinnati Shakespeare Co.’s touring cast stopped by the park for a two-night run of “Romeo & Juliet.” Finally the season ended with the Louisville Ballet performance of “Cleopatra: Queen of Kings,” partly inspired by Shakespeare’s portrayal of Cleopatra.

As was the case last year with “A Midsummer Night’s Dream,” Cincy Shakes uses a reduced touring cast and a minimal set to bring to life “Romeo & Juliet.” Six actors cover the entire play, often ducking backstage and quickly changing costumes to come out as a new character in the very next scene. Each actor appears on stage in the beginning dressed in black and, throughout the show, adds on a button-down shirt, a polka-dot skirt, a wig or a suit depending on the character.

The masked ball at the Capulets is made into a costume party, in which the main characters were dressed as superheroes. When Romeo (Jamie Greene) and Juliet (Stanzi Schalter) share their first kiss (just as a plane flies over the park), they’re dressed as Captain America and Wonder Woman, respectively. Meanwhile, Romeo’s friends Benvolio (Kearston Hawkins-Johnson) and Mercutio (David Derringer) are Spider-Man and Iron Man.

This adds to the boyish dynamic between the friends, as do their rolling eyes and teasing humor. Juliet, likewise, is flirty and giggling with Romeo and lovingly mocking and exasperated with her nurse (Zenzi Mda). This emphasizes just how young the lovers are. The show truly plays out like a comedy right up to the fatal fight between Romeo and Tybalt (Mda), which is even more brutal for Romeo’s lack of a weapon. Instead, he slams Tybalt’s head into the scaffolding on stage until she collapses, dead.

If the beginning of the show services the lighter, comedic elements of the story, the latter half commits to the tragedy, even going above and beyond — though still occasionally poking fun at the melodrama of the two lovers. The end of “Romeo and Juliet” is known by pretty much everyone, but it’s even more achingly painful to have Juliet wake just seconds before Romeo dies. To see the joy on her face as she embraces her husband, only to have that turn to horror as he dies in her arms.

If the audience was looking for something to lighten the mood in the next show, they wouldn’t find it with the likewise tragic “Cleopatra: Queen of Kings,” an original ballet put on by Louisville Ballet. But while Cincinnati Shakespeare’s “Romeo and Juliet” was small and intimate, driven by a spirited and versatile cast, “Cleopatra” is a spectacle for both the eyes and the ears.

Composer Scott Moore combines different styles of music for this Shakespeare inspired tale of one of the most famous historical rulers of Egypt. He carefully researched Middle Eastern folk music as well as infused high intensity rock music, mostly used for the battle scenes throughout the show. The music often speaks to the characters, so for instance, you can sometimes hear a rattling sound in scenes involving the scheming Ptolemy XIII (Kayleigh Western) that grows in intensity, such as the moment before she kills Pompey (Sanjay Saverimuttu).

Interestingly, Cleopatra (Brienne Wiltsie) and Caesar’s (Ryo Suzuki) first meeting looks similar to the first meeting between Ptolemy XIII and Pompey… at first. Caesar is center stage, dancing a solo, while Cleopatra appears above watching him before she descends to join him. The same was true of Ptolemy and Pompey. But the fascinating thing about the dance between Caesar and Cleopatra is the power dynamics. Cleopatra never attempts to flatter Caesar by pretending to be less than him and often seems to challenge him in her movements, having him match her rather than the other way around.

In a panel before the start of the show, choreographer Erica De La O explained that the thing that drew her to Cleopatra was learning that she was among the first in 300 years of Ptolemy rulers to learn the language of the people she ruled. The ballet portrays this exact thing wonderfully, through dance.

When Cleopatra returns from exile, the Egyptian people dance joyously in a very different style than the rest of the show’s classic ballet movements. It’s a step dance, more reminiscent of hip-hop than anything. Cleopatra joins in with them, a way to visualize her “speaking the language.”

The show spans from the death of Cleopatra’s father until her own death, but it doesn’t draw out her tragic end, nor does it paint it as a particularly sorrowful moment. We see Cleopatra captured by Octavian. We see her pick up the vial, but she doesn’t look dejected. She looks like a regal pharaoh taking control of her fate one last time. The lights shine brightly on her, and then before she ever brings the poison to her lips, the lights go down. •