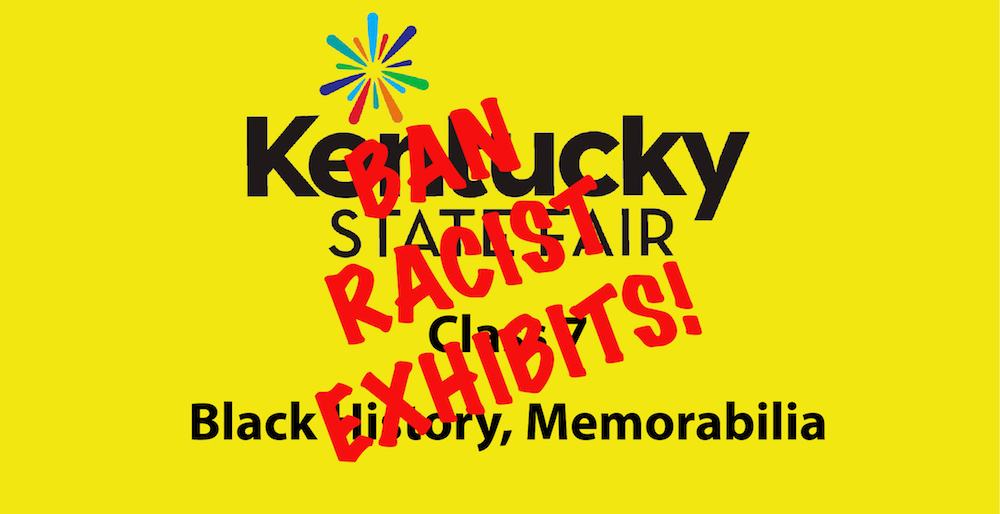 Last year, the Kentucky Exposition Center banned the sale of racist memorabilia, but that policy hasn’t extended to the display of such items in the Kentucky State Fair’s antiques exhibit.

Mammy dolls, Smoking Sambo firecrackers and other items featuring caricatures of black people were on display at this year’s state fair, which ended Aug. 25, in a glass case labeled as “Black History Memorabilia.” It was in the same room as exhibits showcasing homemade wine and beer, quilts and flower arrangements.

Ian Cox, a fair spokesperson, said that the sale of racist memorabilia was banned in November because post-World War II Nazi memorabilia being sold at a National Gun Day show had made community members feel uncomfortable and unwelcome. But, Cox said, the entries in the antiques exhibit, which are submitted by amateur collectors for a prize of $5 to $15, are being displayed under different circumstances. “Items within the antiques and memorabilia section existed in that historical time period,” Cox told LEO. “We don’t act as a representative for any sort of selling or dealing of that item. And ultimately, we can’t change history.”

“It’s not entertainment for me,” he said. “…These caricatures and things that were created, they were created for one reason, and that is to make us, or the perception that we are, inferior.”

The antiques in the “Black History Memorabilia” section are examined by four judges including assistant museum curators, Cox said. The fair provided the names of five judges late Tuesday after LEO submitted an open-records request. A company associated with two of the judges declined to comment on the record about the items, and the rest of the judges could not be reached immediately for comment.

The items in the “Black History” section are displayed with no descriptions. Cox said that will change because of an inquiry from a WFPL reporter. Next year, people who submit “Black History Memorabilia” must include descriptions, which judges will check for accuracy. “There is definitely things we want to do, and we want to make sure everyone feels comfortable,” Cox said.

That brings up more questions for Burton. “Who’s writing the context?” he asked. “From whose perspective? As far as I’m concerned, these are demeaning images of black people, and if anybody is going to speak on it in terms of what that means to us, it would be us.”

Cox would not say whether any of this year’s antiques judges were people of color.

The judges award ribbons for each antiques category, evaluating the objects for age, rarity and condition, and they have the authority to question whether an item belongs at the fair, Cox said. This has happened once for the Black History category. One year, the competition’s judges and superintendent decided that an item was too sensitive to display, so they took a picture of it and hung that up at the fair instead. Cox did not know what year this occurred or what the item was.

Still, some of the items the judges ultimately approved for display this year have a history of being used to dehumanize black people and to justify slavery. It was not immediately clear who had entered the items.

Even if the state fair’s “Black History Memorabilia”section could be contextualized, some question whether its place in the antiques competition will ever be appropriate.

Fairgoer Michele Dutcher was horrified when she saw this year’s display of racist memorabilia — not far from other exhibits of items that Kentuckians submitted in the hopes of winning a prize for their find or creation.

“Other antiques are what people are proud of,” said Dutcher. “I saw, for instance, some Limoges china. That’s something people are proud of, and you have your tomatoes that you’re very proud of. And these were displayed as if people were proud of them. And it’s nothing — oh my gosh — to be proud of.” She hung around the exhibit and observed onlookers pointing and even chuckling at the display.

Burton said that when an organization creates an exhibit about a certain group, it needs to reach out to that group first. “This is why the Kentucky Center for African American Heritage is here,” he said, “to provide guidance, to shed light on issues that may not be illuminated.”

Even then, the exhibit would have to be well thought out. When Burton worked for Jefferson County Public Schools, he produced educational experiences about diversity and inclusion at the fair. The exhibits were a collaboration between multiple organizations, they were interactive, and they included an ongoing workshop series.

“It really does depend on how deep they want to explore the issue,” Burton said.

Cox said he hopes that Burton will help add context to the “Black History Memorabilia” antiques category, and he also encourages the public to make suggestions for the fair at kystatefair.org/contact-us/. •