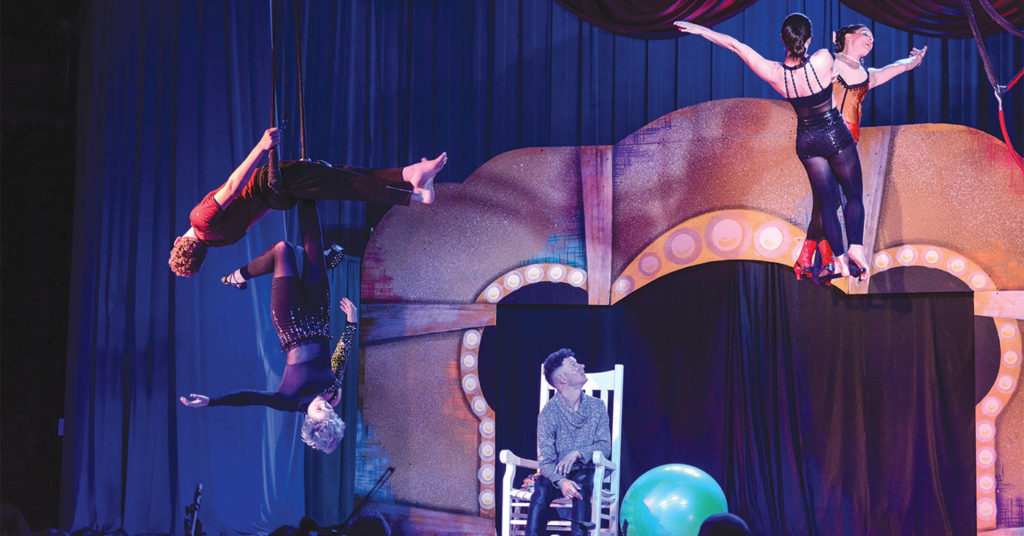 From the opening number of “Pippin,” the Leading Player (Myranda Thomas) and her crew of circus performers promise something special: magic, battles, romance and “a climax you’ll remember for the rest of your lives.” It’s a tall order, which is fitting, because “Pippin” is quite an ambitious production — made famous for the music of Stephen Schwartz, the choreography of Bob Fosse, and for a brightly colored revival full of stunning aerial acrobatics. To tackle the challenge and to create a more authentic circus experience, Acting Against Cancer paired with CirqueLouis.

The circus performer costumes are darker than expected, which may seem a curious choice on the part of costume designer Jaclyn Lyons, until the more nefarious nature of the circus begins to unfold. This is done largely in the second act, but there’s still something chilling about the way the Leading Player declares, “We got ourselves a live one,” after Pippin’s (Michael Detmer) first solo, declaring his desire to live an extraordinary, fulfilling life.

The acrobatics and circus stunts, however, easily make up for the lack of color in costuming. A circus player who is 6 years old (Charlotte Kennedy) balanced herself on a large bouncy ball, following behind another performer on stilts. At the start of the second act, a rola bola balancing act (a board balanced on a cylinder) on a raised platform of the stage made me tense in instinctive worry but garnered excited cheers from the audience when the performer pulled it off. Aerial dancers swung from colorful silk at the side of the audience stands and pulled themselves up onto harnesses on stage.

It’s not just the CirqueLouis performers who pull off impressive stunts. In her solo “No Time At All,” Pippin’s grandmother Berthe (Hannah Jones Thomas) stripped her dress for a tighter trapeze outfit and joined one of the CirqueLouis performers in a trapeze act over the stage. In the middle of a verse in “With You” Pippin performed a sensual lyra dance (using an aerial ring) with a CirqueLouis performer (Abbie Springer). Props go to Detmer for never missing a beat as he leaned back and twisted along the lyra hoop. At one point, Springer dropped down so that she was suspended by only Detmer’s feet.

Detmer’s earnest Pippin and Thomas’ manipulative, charming and sometimes forceful Leading Player make up much of the show, but they were not alone when it came to standout acting. Julie Riehm McGuffey was a delight as “Fastrada,” Pippin’s conniving stepmother, and director Remy Sisk gave an enthusiastic performance as Pippin’s self-obsessed — and something of a meathead — half-brother, Lewis.

Perhaps my favorite acting performance was Olivia Duff as Catherine, a young widow with whom Pippin falls in love. Through Catherine, we start to see the circus for what it is. While Pippin may be “in his first time playing the role,” Catherine has seen this story play out a few too many times and often butts heads with the Leading Player as she strains against it. It’s an interesting play on the lady love interest who’s only there for the growth of the male hero, that Catherine finds herself rebelling against the narrative and standing out as a person of her own with her own feelings about this story.

Her desperation was palpable as she begged Pippin to stay with her, knowing what comes next if he doesn’t, and when he leaves, she began a second solo: “I Guess I’ll Miss the Man.” When the Leading Player tries to cut her off, saying, “You don’t have a song here,” she responds with defiance: “I do now.”

At the Sunday matinée, there were a few issues with balancing the sound, particularly in the first act, which at times made it difficult to hear the performers singing over the sound of the orchestra. The Leading Player’s mic was a little tetchy, and the sound of the orchestra somewhat overpowered the vocals for the first few rows. It’s unfortunate, with powerhouse performances like that of Thomas, Detmer and McGuffey. Whatever the issue, the crew seemed to resolve it during the intermission, and things improved in the second act. It didn’t take away from the spectacle of the show.

Instead, the Leading Player did that herself — with full, furious intention — as Pippin turned down her promised climax (to jump into a barrel of fire and burn out, finally extraordinary) to instead live a simple life with Catherine and her son, Theo (Joey Rechter). The Leading Player lashed out then, demanding the lights to go down, the stage to be stripped — including the costumes of Pippin, Catherine and Theo — and screamed at the orchestra to stop playing. The gutting of the production is made much more poignant because every part of it was so big throughout the rest of the show. “Try singing without any music, honey,” she spit at them as she storms off.

Interestingly enough, as soon as she said it, I thought of the first few lines of “I Guess I’ll Miss the Man,” which Catherine — again well-matched to Pippin in that she refused to play along — did, in fact, sing without orchestration.

If you’re a long time fan of “Pippin,” you may know that the show has two endings. The original, in a bit of a bleak choice, ends with Catherine asking Pippin how he feels, and Pippin answering, “Trapped, but happy.”

Acting Against Cancer, fortunately, opts for the second ending — less hopeless, but somehow more chilling, reminding us that everyone has their own circus to contend with. •