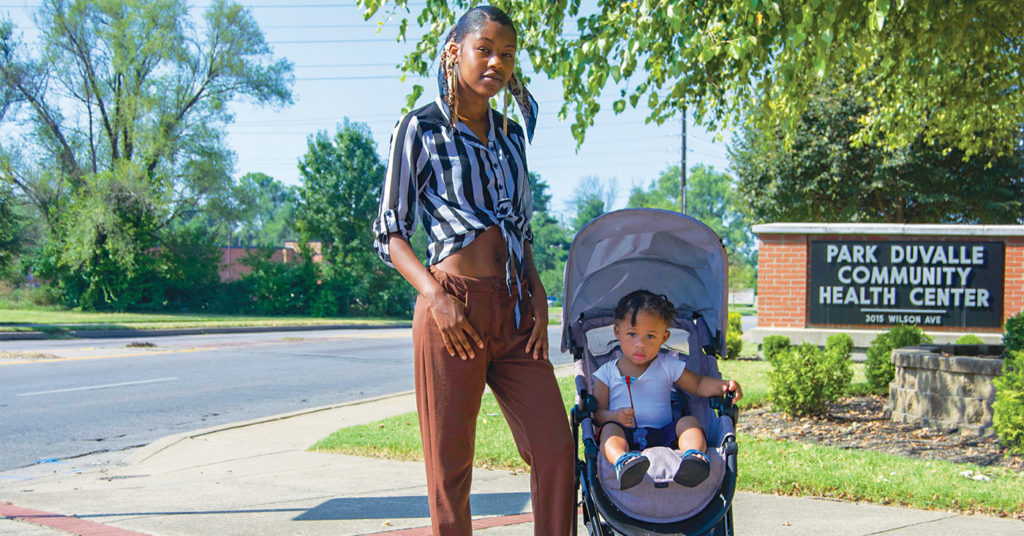 Corriah with her son Jordan, from Park DuValle

“I’ve been living in The West End for six years. I came from Valley Station. It’s been hard; the violence gets to you. My brother just got killed two months ago, changing his tire. The community is very hard to bring together.

The case is still unsolved, and the dudes are walking around doing the same thing. His birthday was just two days ago. He had a baby, and he was only 7 months at the time. It’s just hard. He was a good person. He really wanted us to get out. He reached out to groups to help him get out of the lifestyle he was in. It was just too late.

I’m 18, and I wanna accomplish everything. I’m going for everything in this life. I got so much more to get out of it. That’s why I’m sitting right, walking my son to the doctor without anyone in my corner. I have myself, and I want so much more out of life, and that’s what I’m going to get.

Next month, I’m going to nail tech school. I’m starting a little business. Other than that, I’m just trying to make it. I wanna help other people. I wanted to do something this summer about this violence. It’s just hard to do that when people aren’t on the same page and won’t come together and be positive.

My grandmother is the most influential person in my life. I should’ve ran with everything that she told me. You’re supposed to listen to your elders ‘cause they’re not going to tell you wrong. If I would’ve listened to my grandmother, I wouldn’t be in the position that I’m in now.

I would be so much further in life. I would have been more focused and not falling into the statistics and waiting for public assistance. I would have been working harder, and my brother would’ve never got killed. He used to talk about us getting out of here and doing better. I blame myself for where I’m at right now.

When my brother was murdered, we didn’t have anybody. He didn’t have any life insurance. We had to come up with the money and wait three weeks. He didn’t get the proper burial. He’s at Green Meadows, and we’re trying to put the money together for his headstone. We just went to go see him and really don’t know where he’s really located. There’s so many bodies that they’re laying close together because there are so many murders.

My son and my nephew keep me going. It keeps me going all the way. I wanted to give up plenty of times, but I can’t because I have them looking up to me. That’s the only thing that keeps me going every single day.

Don’t rush anything. Don’t force anything. Go with life and don’t let anything stop you. Never give up and keep on going. Don’t think that you have too much on you because there’s always another person who is dealing with more. Keep on going.”