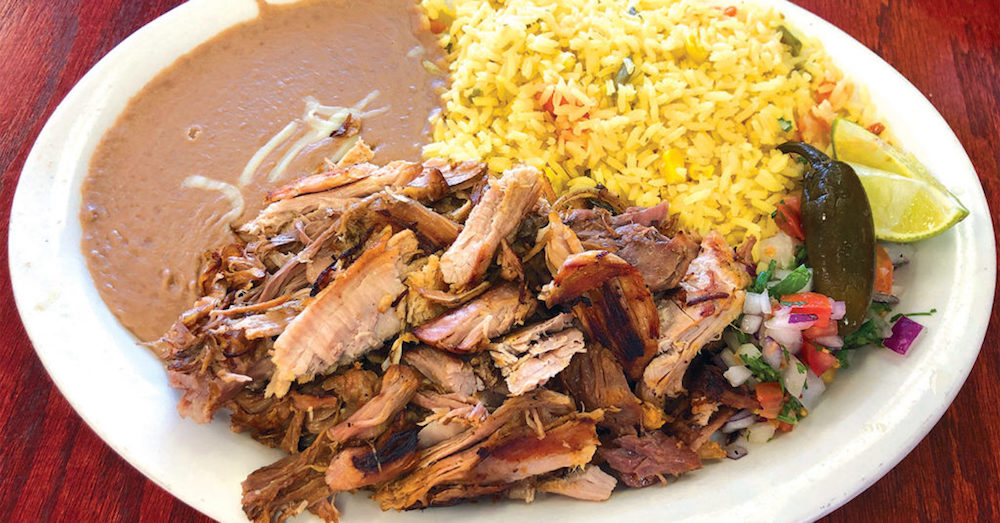 La Sierra Tarasca’s carnitas show off the style of Michoacán, where the iconic pork dish originated.

There’s a special place in my heart for Mexican eateries like La Sierra Tarasca.

First, in a time when the president calls our Latin American neighbors thugs, criminals and rapists and orders refugee families separated at the border, it’s time for the rest of us to stand up for our Latinx brothers and sisters, whether they have green cards or not. That matters.

Second, but far from least, I love Mexican food, especially carnitas. This iconic Mexican pork dish puts even Southern pulled pork barbecue — which it resembles only superficially — in deep shade.

Carnitas — whose name translates literally from Spanish as “little meats” — is made all over Mexico, and you’ll rarely find a taqueria that doesn’t feature it as taco meat. But carnitas got its start in Michoacán (Meech-o-wah-kahn), the mountainous province west of Mexico City, where the ancient Tarascan people held their own against the powerful Aztec Empire.

La Sierra Tarasca? The name of this restaurant means “the Tarascan mountains”! This place has its roots in Michoacán, and it shows in some of the best carnitas I’ve ever enjoyed.

More than just a taqueria, it joins a growing local Mexican restaurant genre that we might call taqueria-plus, with table service and a broader menu that features regional specialties along with Mexican standards.

Complimentary chips and salsa signaled good things to come. Yellow corn chips were admirably fresh and crisp. Dips were hot and hotter: Red salsa was textured and subtle with medium heat; a creamy, pale green avocado-jalapeño puree will light you up.

Don’t make your final decision until you get to the dinner plates, which will tempt you with 21 entrées, ranging in price from $8.99 for a quesadilla dinner to $14.99 for bistec a la mexicana, a skirt steak grilled with onions and served with tortillas, rice and beans and salad.

A lot of our neighbors were getting mojarra dorada, a whole fried golden mojarra fish, a Mexican species that resembles tilapia, while others were taking advantage of weekend specials on oversize bowls filled with restorative soups: menudo, the classic, spicy tripe soup hangover cure ($9.99); Caldo de Res, a hearty, filling beef and vegetable soup ($11.99); and Caldo 7 Mares, a steaming seafood soup ($14.99).

Maybe next time for those.

This day, we came for carnitas, and we left fully satisfied. A huge serving of carnitas estilo Michocoán ($10.99, carnitas Michoacán style) displayed the careful subtlety that makes this dish special. It had been pulled into bite-sized or smaller bits whose varying texture suggested use of the whole pig or much of it, marinated in citrus and slowly deep-fried at low temperature in pork fat or lard, then finished at high temperature to yield a tasty mix of tender bits and crunchy brown edges. Warm, house-made corn and flour tortillas provided the means for make-your-own tacos.

Huevos rancheros ($6.99) also signaled a competent hand in the kitchen: Three soft, sunny-side-up fried eggs were smothered with a delicious ranchero sauce, a smooth, bright-red blend of tomatoes, onions and Mexican chiles that sang in harmony with the eggs. Both dishes were served with well made, creamy frijoles and tasty, veggie-studded yellow rice.

Mexican and domestic beers are available, along with cane sugar, Mexican Cokes, Jarritos sodas and north-of-the border soft drinks. We went with zero-calorie ice water and enjoyed a filling meal for a thrifty $20.12, plus a $7 tip. •

Noise level: A buzz filled the room on a busy Sunday afternoon, but that was no barrier to conversation. (Average sound was 72 decibels, the level of loud-normal conversation, with occasional spikes to 86 decibels, similar to the sound of a hair dryer set on medium.)

Accessibility: The entrance and dining areas are on the level, accessible to wheelchairs, but the restrooms aren’t equipped with facilities for wheelchair users.