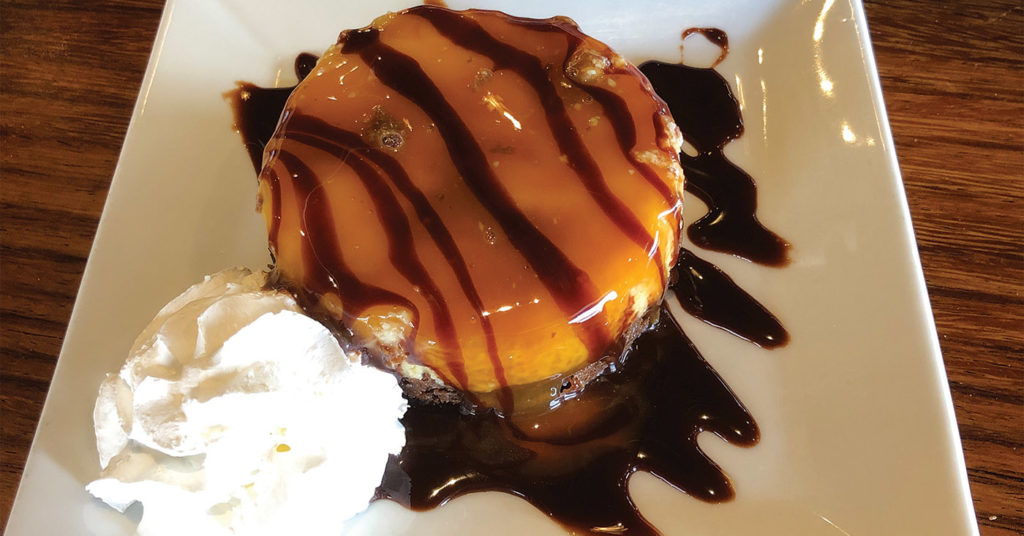 The chocoflan dessert at La Catrina.

While I was binge-watching “Taco Chronicles” on Netflix last week, I got to the sequence on carnitas and immediately realized that I had to get up and go either to Michoacán or, at the least, to a really good local taqueria. Once I checked my wallet, La Catrina Mexican Kitchen in New Albany got the nod.

So we turned off Netflix, headed across the Sherman Minton Bridge (no tolls!) and pulled up right across the street. You can’t miss La Catrina, with its huge, bright Dia de los Muertos skull painted on the corner facing Elm and Bank streets. The place was packed, and the overhead doors were rolled up, turning the entire dining room into a large, open-air, street-food cantina.

The decor is industrial-chic, with painted brick walls splashed with colorful Day of the Dead images, including the restaurant’s namesake, La Catrina with her feathered sombrero, one of the most iconic Day of the Dead figures. Sturdy wood tables and heavy wooden chairs set the scene. Simple flatware is rolled in white paper napkins.

You can take your pick among 10 naked tacos ($3.50 each) or quesadillas ($4.50 each), topped with the meat of your choice and ready to hustle to the ample toppings bar.

Ten more tacos are fully dressed and ready to eat, ranging from $3.75 (for a vegetariano taco or a tinga taco with chipotle-braised chicken and black beans) to $4.75 (for four choices, including the namesake La Catrina with grilled shrimp and bacon). You can also skip the tortillas and get a naked bowl ($9) with taco meat, poblano rice, black beans, queso and salad fixings.

The black, skull-bedecked menu also offers apps from $5 (for chips with three salsas) to $22 (for a dozen oyster shooters; a half-dozen are $10). Ten soups and salads are $9 to $12, and a couple of Mexican desserts are $5.

The well stocked bar offers a good selection of craft beers, plus plenty of tequilas and bourbons.

We started with a plate of tacos dorados (golden tacos), closed with a scalloped edge and deep fried golden and crispy. We chose two stuffed with pork picadillo, finely chopped pig meat with vinegary-spicy flavorings, and two with finely diced, fiery-spiced potatoes. They were attractively plated with dabs of piquant green and red salsas and soothing white crema.

A pair of naked tacos came on small, doubled corn tortillas. We chose one topped with a portion of calabaza vegetables (pan-roasted zucchini, corn, poblano peppers, crema and cotija cheese, creating an off-menu meatless taco); the other was filled with carnitas, a choice we had to make after seeing their starring role on Netflix.

Once dressed with standard Mexican toppings, lots of onions and cilantro, striped with crema and salsa verde, the veggie taco became so flavorful that we didn’t even notice the absence of meat.

The carnitas taco was the highlight of the day. It looked, and presumably tasted, just like the Michoacán-style offering on Netflix: Citrus-marinated pork was slow-cooked until falling apart, then pulled and finished in the oven to yield a good mix of crispy edges and tender bits. It was too good to drown in toppings. Onion and cilantro and a little crema did the job.

The dressed specialty tacos come on single, blue-corn tortillas, which bring an intriguing but less familiar flavor to the table, as the slaked lime flavor from blue, masa harina flour is more forward here, catching your attention at first bite.

A Dona Nena taco ($4.25) was loaded with spicy potatoes, refried black beans and chorizo (which you can omit to make it meatless), kicked up in flavor with an intriguingly earthy roasted tomatillo crema, dressed with pickled red onion and cilantro.

A pretty dessert, chocoflan ($5), featured a well-made custard flan drizzled with silken caramel and chocolate, built on a base of dense, mild flavored chocolate cake.

Noise level: With the overhead doors up and the house almost full at lunch time, the roar ranged from loud to deafening. Plan to lean in to your tablemates if you want to hear them. (Average sound was 80 decibels, the level of loud singing, with peaks to an ear-shattering 92 decibels when a large truck rumbled past.)

Accessibility: Only marginally accessible to wheelchair users. Most of the dining area is on a concrete slab framed by a yellow-painted curb that’s at least six inches high. One door in a distant corner boasts a level entrance limited by a threshold bump and a “use other door” warning, and a few tables along Elm Street sit at street level. The restroom is equipped for use by wheelchair users.