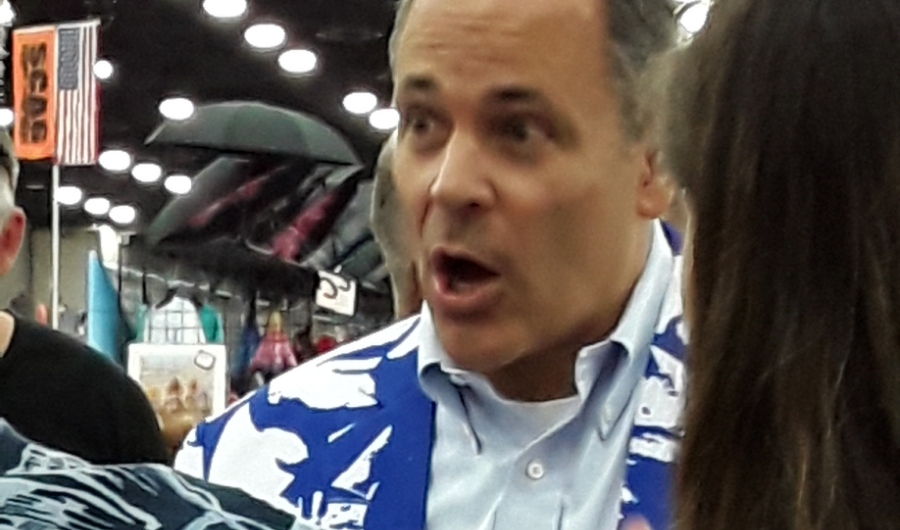 Here’s what Gov. Matt Bevin and Democratic volunteers actually talked about in those photos you saw on Facebook and Twitter, the ones with Bevin wearing a blazer imprinted with Donald Trump’s face.

If you’re thinking “a WWE-style smackdown” or even “a heated discussion,” then you’re like lots of people who saw Bevin seemingly mean-mugging intense-looking Democrat volunteers at the Kentucky State Fair.

But you’d be wrong.

“I’m sure he knew what he was doing,” said Forest Clevenger, one of the volunteers captured in a series of photos taken on Saturday. “I’m sure he knew the optics of what that looked like. And I’m sure he wouldn’t have minded us picking a fight with him and being mean to him. But we weren’t. We were respectful, and he began by saying that he respected the work that we’re doing and it’s part of the political process.”

Bevin’s office did not respond to a request from LEO for comment, but his campaign manager Davis Paine tweeted, in part: “Governor @MattBevin stopped by the @KyDems booth at the @kystatefair today. Great discussion about policy and how we can keep KY moving forward.”

Clevenger, who spoke to LEO on his first day of classes as a freshman at UofL, was pictured in a salmon-colored shirt alongside Meera Sahney and Antonio Wilson in most of the online pictures.

Sahney, also a freshman at UofL said that her expression, an “over-it” stare, might have confused some people, “But the narrative got it confused,” she continued.  “We actually had a civil conversation, and I think that conversation should be a prototype for all conversations moving forward to have respect for everybody.”

Clevenger wanted to make it clear that he’s not a fan of the governor.

“I disagree with Matt Bevin on so many things on policy from guns to abortion to privatization to everything in between,” Clevenger said, “and I dislike the rhetoric that he takes publicly and that I’ve read about, the way he refers to teachers, and he also says crazy stuff to get headlines.”

But he and Sahney were happy for the opportunity to have a polite conversation with Bevin.

The governor actually approached Brenda Erickson first, the chair of Kentucky’s District 29 for the Louisville Democrats. They, too, had a pleasant enough exchange, Erickson said.

“He came in, and he said, ‘We’ve talked many times haven’t we?” she said. “And we have. I’ve called him out many times, and I have to say, every time I have he’s been very nice to me.”

Erickson confronted Bevin about blocking her on Facebook, to which Bevin said that he did not think he, personally, had.

From there, Clevenger, Sahney, John Sutton and, eventually, Wilson, talked with Bevin about proposed red flag laws, which would allow a court to confiscate guns from someone who is a danger to themselves or others (he reportedly refused to take a stance on a “hypothetical”). They talked about abortion (Bevin was against that, obviously) and the foster care system (Bevin talked about his contributions).

But they devoted most of their conversation to the importance of civil discourse.

“What we agreed upon is that our discourse has fallen apart, which is pretty basic,” said Clevenger, “and that polarization and partisanship is at incredibly high levels right now and very destructive.”

And a perfect example of that has been the way the photos of Clevenger, Sahney and Wilson have been misconstrued.

“One thing we said was that the only way to get through to people nowadays is person to person, and there’s no way for stuff to accurately really get out on social media or oftentimes for the whole truth to come out on your media, and that’s what happened here,” said Clevenger.

But did his conversation with Bevin produce anything positive?

“I don’t know how much he heard us out, but he did at least act like he did,” said Clevenger, although he said that he wished Bevin would have taken a stand on the red flag bill.

Sahney, meanwhile, said that she’s now interested in learning more about Bevin’s policies, a specific one being criminal justice reform.

“To be honest with you, I don’t know that many,” she said. “I’ll be more interested in working with his team, or with Republicans in general.”

As for that Trump blazer?

Clevenger’s up-close take: “It’s ugly, and it didn’t fit him.”