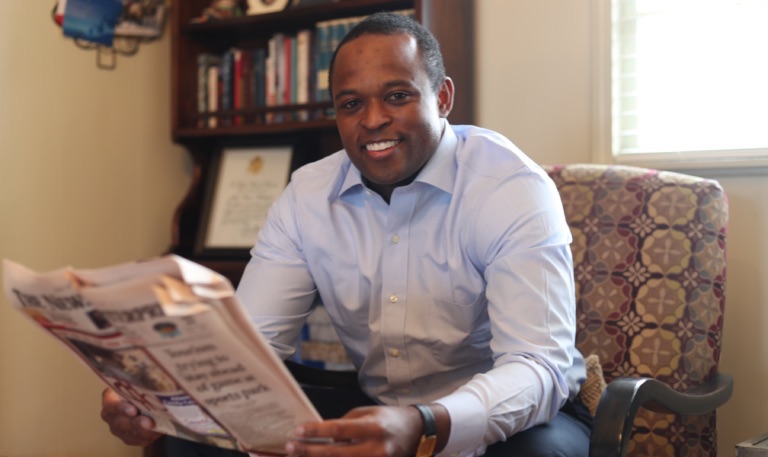 The candidacy of Daniel Cameron, the one-time Mitch McConnell aide who is the GOP’s nominee for Kentucky Attorney General, has turned into a national story. President Trump tweeted an enthusiastic endorsement of Cameron last month. The timing of Trump’s backing of Cameron, who is black, was probably related to the fact that the president was being criticized then for making comments that many felt were racist about the city of Baltimore and that area’s congressman, Elijah Cummings.

Cameron proudly accepted the endorsement. That led to a black liberal lawyer in Louisville attacking Cameron with a derogatory term that won’t repeat here and suggesting that the candidate was “slapping all the black ancestors in the face.” In response, Cameron went on Fox News to declare that he is a “proud Republican,” and “the Democratic Party needs to stop telling black Americans how to think.”

I don’t think the Cameron’s candidacy is some kind of referendum on black Republicans or how the Democratic Party should treat them. That said, his candidacy and the debate about it illustrates some important dynamics about Kentucky politics, race and the Republican Party

1. The candidacy of Cameron is an important, positive achievement for both the candidate and the Republican Party

I wrote a piece last year explaining the partisan gender gap on Capitol Hill — there are significantly more female Democratic congresswomen than female Republican congresswomen. Part of that disparity is explained by the moves of the two parties — Democrats have made intentional efforts to help female candidates raise money and get through primaries, while the GOP has taken a more hands-off approach. Republicans also have few black or Latino members on Capitol Hill, and I assume that also in part due to the party not having an intentional effort to increase its racial diversity. (I will get to the Trump factor later.)

But the Republican Party, specifically Mitch McConnell, helped pave the way for Cameron’s candidacy. As a student at UofL, Cameron was in the McConnell Scholars program, an initiative created by the senator to get Kentuckians into politics. After law school, Cameron worked as a counsel in McConnell’s office. During this year’s GOP Attorney General primary, Cameron was backed by influential conservative groups and activists allied with McConnell, helping Cameron defeat state Sen. Wil Schroder, R-Campbell. Cameron now has a very strong chance to be the first black person ever elected statewide on their own (as opposed to running on a ticket with someone) in Kentucky history.

Noting McConnell’s role is not to take anything away from Cameron himself. Whatever you think of McConnell’s policy views or political ideology, he is a man committed to winning elections and gaining power. McConnell wouldn’t be behind Cameron if he didn’t think Cameron had the talent to win this race. To get the backing of McConnell’s political network and win a competitive primary at age 33, as Cameron has done, is a considerable accomplishment.

2. The Kentucky Republican Party still has shortcomings in terms of racial diversity — and so do the Democrats

If Cameron is a positive story in Kentucky Republicans embracing a black politician, then the saga of Jenean Hampton shows the polar opposite. It was never clear that Gov. Matt Bevin gave his lieutenant governor much of a role in state government in the first place. Then, he allowed rumors that she would be replaced on the ticket in 2019 fester for months. Bevin eventually replaced Hampton on the ticket with state Sen. Ralph Alvarado, R-Winchester, another person of color. And he then allowed Hampton’s top aides to be dismissed from the government over her objections, leading to Hampton filing a lawsuit against the Bevin administration this week.

So when Republicans emphasize that they have a racially-diverse slate of candidates (two of their seven statewide hopefuls are nonwhite), that story is complicated by what happened with Hampton. (Along with governor, lieutenant governor and attorney general, Kentuckians will elect candidates for state agriculture commissioner, auditor, secretary of state and treasurer in November.)

All seven Democratic statewide candidates are white, even though Kentucky’s Democratic voters are more than 20% nonwhite (mostly black.) That’s not a great look for Kentucky Democrats. That said, all of the black members of Kentucky’s statehouse are Democrats, so the Democrats are the more racially-diverse party in Kentucky outside of the 2019 statewide races.

3. Cameron is likely to avoid criticism of Trump or the broader Republican Party on racial issues

Some of the black Republicans who were the most influential figures during the George W. Bush and Obama administrations tried to push the party towards more inclusive stances on racial issues. I’m thinking of Colin Powell and former Republican National Committee Chair Michael Steele in particular. Will Hurd, the Texas congressman and currently the only black Republican in the House, has followed in this tradition, occasionally criticizing Trump’s remarks on racial issues. But Hurd is retiring next year — and I suspect part of the reason why Hurd is departing is that there’s little room for advancement in the current GOP for those who criticize Trump.

Cameron is young and, I assume, will eventually run for governor or senator if he is elected attorney general. So I would expect him to defend Trump whenever possible and never cast the president or his remarks as racist.  In fact, I think the path to success for aspiring Republicans in the current GOP, particularly nonwhite ones, will be to embrace Trumpism, especially and including its racial elements. Cameron might take up causes such as criminal justice reform that disproportionately affect minorities. But I think he can take that course without criticizing the president on racial issues — or anything else.

4. This debate about the role of black Republicans is nothing new

Leah Wright Rigueur wrote a book called “The Loneliness of the Black Republican” that was published in 2015, well before Trump was elected president. About 90% of African Americans have voted for Democratic presidential candidates for decades, a dynamic that has long made it hard to be a black Republican.

5. It’s worth thinking about the term “black leader”

Cameron is already a black leader in Kentucky — he is black and a leading figure in the state’s dominant political party. At the same time, some of this debate around Cameron’s candidacy (and black Republicans in general) is about how much he represents or speaks for Kentucky’s African Americans more broadly. (Cameron is not claiming to speak for black people, I should emphasize.)

One useful thing to think about is who black people in Kentucky vote for. Louisville has a few heavily-black areas, and they are sending Democratic politicians such as state Rep. Charles Booker and state Sen. Gerald Neal to Frankfort. In fact, it’s likely that Democrat Greg Stumbo, who is white, will get more votes than Cameron in Louisville’s majority-black areas, since Stumbo is a Democrat.

6. Race is not really a big issue in Cameron vs. Stumbo

Speaking of Stumbo, Cameron’s race is really not an issue in their contest. The 68-year-old Stumbo, who was attorney general from 2004 to 2008, has argued the issue is age and experience — namely that Cameron does not have enough of either.

But I would argue that the biggest difference between Cameron and Stumbo for Kentucky’s voter is really party. Current Attorney General Andy Beshear, a Democrat, has filed lawsuits and broadly served as a check on the power of Bevin and the GOP majority in both houses of the legislature. It’s not clear if Bevin or Beshear will be the governor in 2020. But I would expect Stumbo to closely scrutinize the work of the legislature if he is elected. In contrast, Cameron is likely to be more deferential to his party’s leaders running the state House and Senate.

Perry Bacon Jr. is a national political writer based in Louisville. You can contact him at [email protected]