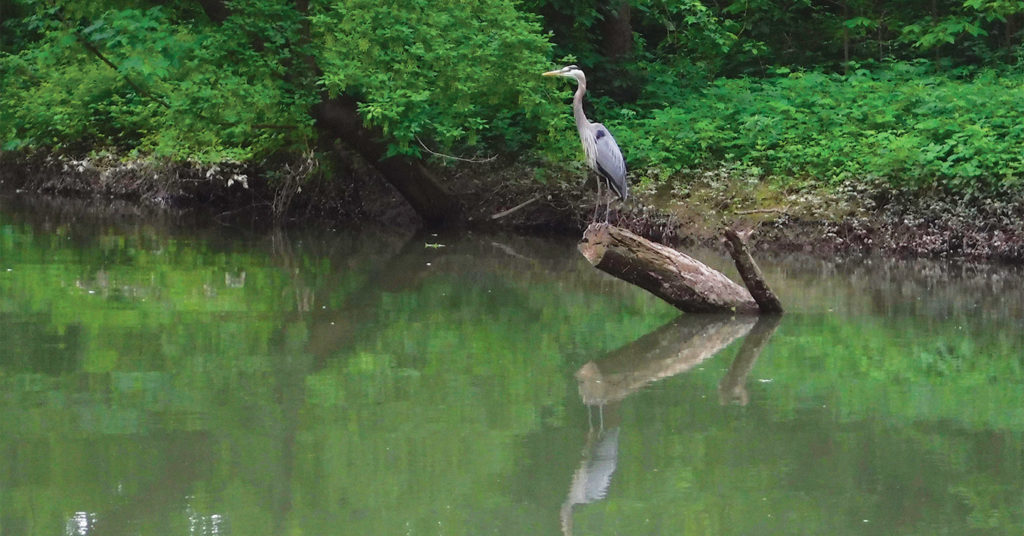 A Great Blue Heron near the mouth of Beargrass Creek. | Photo by Mark R. Long.

Beargrass Creek needs a lot of pricey TLC after two centuries of abuse. A deal sealed last week with the federal government may bring renewal of the waterway’s three branches closer to reality.

It took months to figure out, but the cash-strapped Metropolitan Sewer District says it will match up to $1.5 million from the Army Corps of Engineers to study how to restore the entire Beargrass Creek ecosystem. Once a team of biologists, hydrologists and others finish that work in the next three years or so, the path opens to an even sweeter cost-matching deal for millions more to repair habitats, slash back invasive species and other jobs to improve the stream’s health.

“Taking a comprehensive look at the watershed is so very important,” said David Wicks, a longtime environmental educator, paddler and advocate for local waterways. “That’s the only way to fix it, really.”

This Beargrass Creek Ecosystem Restoration Feasibility Study is just the latest in a decades-long string of studies of the creek, which drains more than 60 square miles of Jefferson County. Most of these studies have just gathered dust. The creek and its pollution have drawn extra attention this year, however, as MSD chips away at more than $1 billion in mandated consent decree clean-up work and as a big urban-planning conference here sparked fresh ideas for sprucing up the waterway. A new botanical garden taking shape near the creek’s mouth will also draw more eyes to the waterway.

LEO reported in March a plan by The Congress for the New Urbanism to connect neighborhoods to the creek, improve the health of the waterway and the life it supports and develop destination spots for people to learn about and enjoy the stream.

Officials from the Army Corps and MSD, as well as advocates for the stream’s health, say the extent of the federal commitment and pressure to show results mean this time might really be different. Even though the city faces a budget crisis and MSD’s costs for required work keep rising, the agency managed to scrape together the matching funds — half of which can come from in-kind work. Passing up the Army Corps offer would have been a costly mistake in the long run, officials said.

“The benefit of this grant is that this is leveraged money; it’s taking advantage of an opportunity from the Corps of Engineers which may not present itself again,” said Metro Councilman Bill Hollander, D-9th District.

Best known around here for running the McAlpine Locks and Dam, the Army Corps of Engineers is also responsible for ecosystem restoration of waterways. This job evolved from the Corps’ role in preventing and cleaning up dumping in the nation’s harbors in the late 1800s. The Beargrass study is one of just six so-called General Investigation Studies cleared by the U.S. Congress last year, along with big studies to improve navigation in New York Harbor and New Orleans, among others.

Two projects that grew out of earlier such studies are a $1.4 billion revamp of a stretch of the Los Angeles River and the multibillion-dollar restoration of the Florida Everglades.

“We have a mandate by Congress to oversee the waterways, and with that comes the protection of the resource,” said Andrew Reed, an Army Corps project manager and lead planner of the Beargrass study. “So it’s not just ensuring that we can continue to have commercial inland navigation. We also have to make sure that we aren’t having a negative impact on the environment.”

By the time the Corps-led study is complete and the team starts formulating projects, MSD will largely be finished with its consent decree work to keep combined sewer overflows out of local waterways, said David Johnson, MSD’s development and stormwater services director. Efforts to restore the broader ecosystem would complement projects like a $200 million tunnel under downtown, help guard against flooding and continue to improve water quality, he said, making it a good deal for ratepayers.

One of the biggest problems for Beargrass is the vast expanse of paved ground that speeds rainwater tainted with bacteria, oil, chemicals and dog poo into the creek, a long stretch of which consists of a bare concrete chute. Hopes are rising among local environmentalists that this new study will lead to expanses of greenery to absorb and cool this water, as well as a tree-lined corridor for native wildlife and enticing destinations for Louisvillians to relax and play.