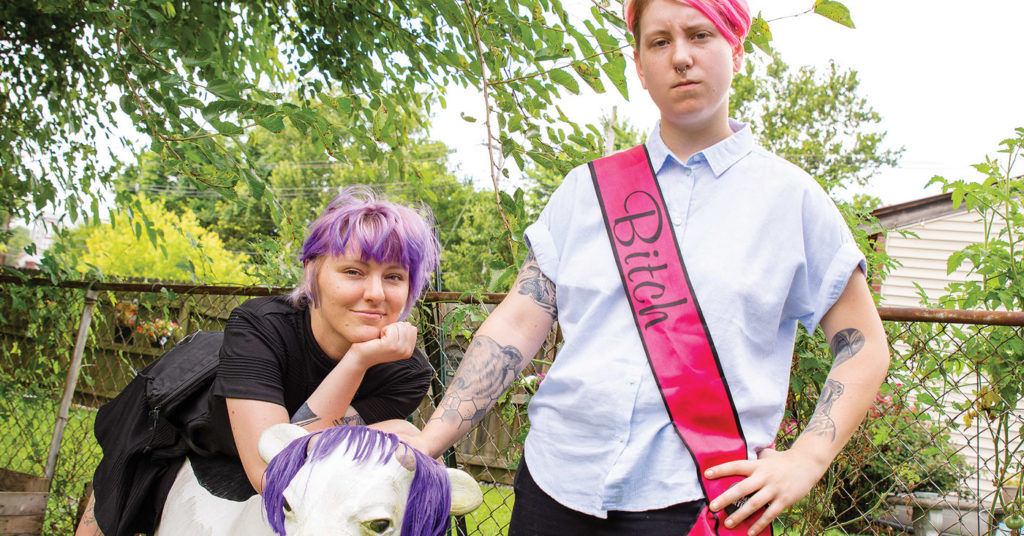 Viva Las Vegas: An Elvis Week Celebration
Copper & Kings Distillery
$15  |  7-11 p.m.
To celebrate Copper & Kings’ new brandy aged in red wine barrels, Riding With The King, the distillery is throwing an Elvis-themed party with music from the rock ’n’ roll legend and performances by drag queen showgirls. There will be samples of Riding With The King available along with Elvis-inspired cocktails including a peanut butter and banana speciality. Hey, if it’s good enough for The King, it’s good enough for us.

GRLwood Album Release Party
Headliners Music Hall
$10  |  8 p.m.
Louisville’s hottest band celebrates the release of their latest album, I Sold My Soul To The Devil When I Was Five.  LEO Music Editor Scott Recker said of their 14-song record: “With a keen eye and a lot of heart, the self-described ‘Kentucky-fried queerdos’ have a profound fearlessness, and I Sold My Soul shines with the same electricity as their debut, but with even more range, nuance and power.” The scream-pop duo plays with a solid lineup of other local acts, Hazelfire, Mike Bandanna, Belushi Speed Ball and Wombo. This show is all ages.

Kentucky State Fair
Kentucky Expo Center
Prices vary  |  7 a.m.-10 p.m.
The Kentucky State Fair is back with its glorious rides, barns and barns of farm animals and its deep-fried, sugar-sprinkled food. Every day from Aug. 16 to Aug. 25, there’s something new to experience, and on Saturday, the schedule includes appearances from Lady Houdini, the BMX Pros Trick Team and an evening concert with Black Stone Cherry, Tyler Bryan & The Shakedown and The Josephines.

Twin Sister Radio Record Release Party
Rockerbuilt
$5 suggested donation  |  6 p.m.-midnight
In 2015, we opined that it had been “too long now since Twin Sister Radio has released anything new.” Well, now, it’s been four years since this garage rock six-piece unleashed its last full-length album, and we’re just as happy as we were then to see them back at it. They play alongside Ouzelum, Twenty First Century Fox and Shutaro Noguchi — all local acts worth seeing — as well as a new project, Work Shirt, made up of members from Louisville bands WAXEATER, Parlour and Twin Sister Radio, making mid-fi guitar music. And it’s all happening at the Rockerbuilt art gallery, fabrication shop and event venue with beer and food available for purchase.

The Summer Used Book Sale
Locust Grove
Free  |  10 a.m.-4:30 p.m.
Twenty-three thousand books will be for sale at Locust Grove’s used book sale. They include works on history, mystery, art, architecture, literature, cooking, humor and more. And, they’re inexpensive: $1 to $2 for most and $3 and up for special titles. Admission to explore the rest of Locust Grove is $9 for adults, $8 for seniors and $4 for children ages 6-12.