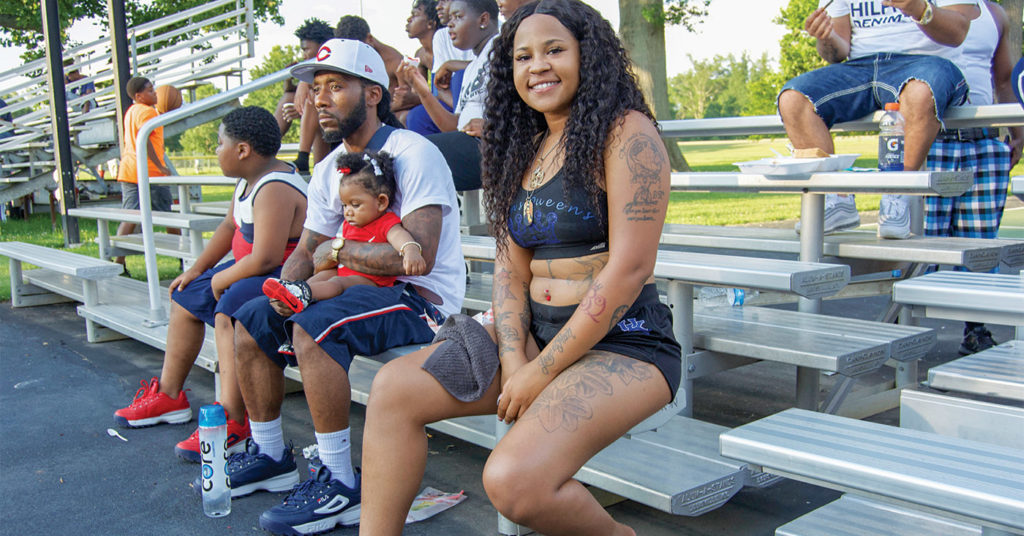 Lamonique, at the 2019 Dirt Bowl in Shawnee Park

“I’ve been coming to the Dirt Bowl for about six or seven years, now. It’s like when you turn off Broadway, into the park, it’s always great vibes and great feelings. When you get in here, you see everyone having a good time and just out here living. There’s food and kids everywhere. The police and vendors are here, too. It’s just a good time, and it’s exciting to see everybody together and getting along.

My father is actually one of the Dirt Bowl legends — his name is Gerald Gray. I came down here to see The East End play. I have friends that I graduated from high school with that are playing now. So, the Dirt Bowl is literally everywhere, it’s all around me.

It wasn’t like it is now, you know, with all the killings and stuff. We had our little spats, but they were fistfights, and you would go on about your merrily way. We didn’t have any gangs. We had our own little crew that we ran around with. As far as fighting and shooting, that wasn’t going on with the younger people. The older people were the ones doing all the shooting. You didn’t play with them older people.

I was born and raised in the Russell area. We moved from Cedar Street to 19th, between Walnut and Madison Street. Our address was 513, where that empty lot is, where Jay’s Restaurant used to be. There used to be a house right there on that corner. I had a good time, growing up. I didn’t have nothing to squawk about. I come from a good family with five boys and two girls.

It was kinda rough. Some people had food on the table, and some people didn’t. We were fortunate. My father was a minister, and he had his own church. We ate well, but back in the ‘40s and ‘50s, it was rough, but we made it. That’s the main thing — we made it. I graduated from Central High School in ‘63 and went in the Navy and never looked back.

I left in ‘63 and came back in ‘67. I stayed in the Navy for four years, overseas. I stayed near the French Riviera. After being over there, I moved to New York and stayed for awhile, but I decided to come back home. When I came home, I had a good time here. I went to school and worked. I worked at Olin Mathieson, the powder plant. I left there and went to the P. Lorillard Tobacco Factory that was on 30th and Muhammad Ali. I spent 34 years down there. I started working there in ‘72 and retired in ‘06. I was a mechanic and worked on machinery.

I like to sit out. My friend comes around and tells me that I’m always meddlin’. I’m not meddlin’, I just like to know what’s around me. I like to meet new people. I know everybody up and down this block. We don’t have any problems in this area. I’m out here every day. I won’t sit out in the sun when it’s too warm out. I got a shade tree that I’ll sit right under. I’ll get a breeze every now and then, but as long as this bad boy don’t fall, I’m cool. I sometimes leave here and will walk down to the church, down the block, but I belong to Bethel Baptist Church on 35th and Garland.