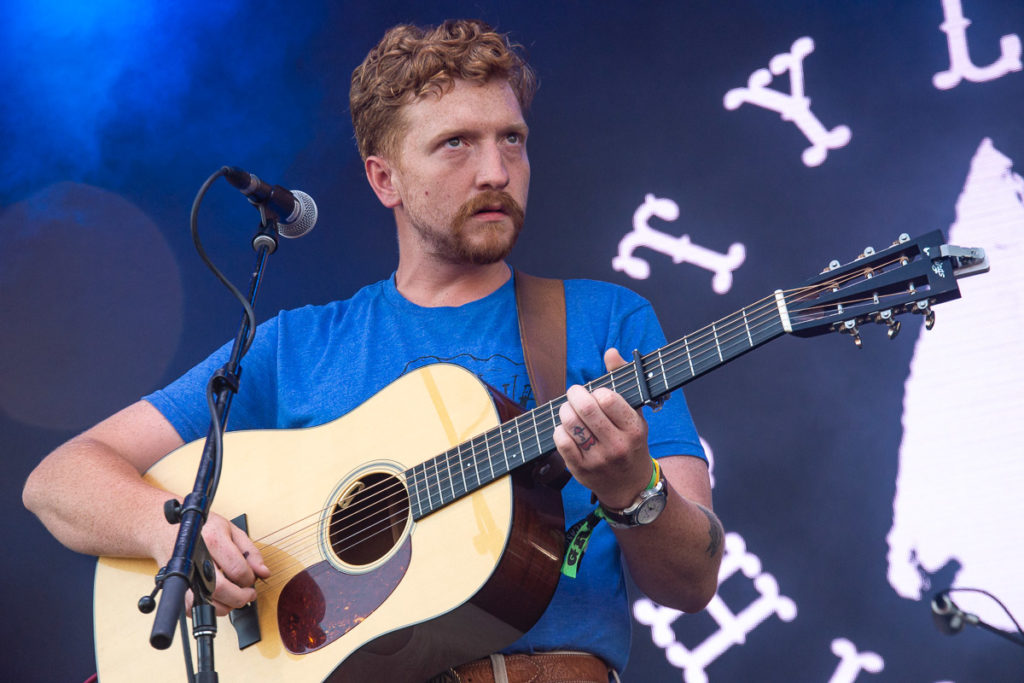 As I sat waiting for the local band Boa to start Sunday, a neighboring couple also clamoring for shade from the sun asked, “Do you know who this is? What do they sound like?” I responded, “It’s Boa and they are in the realm of psych rock.” A blank stare. “It’s smooth, like lots of rhythm,” I said. She smiled and went to get a beer. The true Boa followers were up front and ready for the groove and punch of two brothers (Logan and Gavin) and one from another mother (Shane). The performance started with stage crew revealing a print-screened tapestry of the Boa boys depicted in various pleasant scenes which served as the backdrop for their set. It was later revealed this was the cover of their new album Something Special due Oct.4.

Logan was dressed in ‘70s-esque garb, including plaid polyester pants and a short-sleeved crew neck sweater (gold chain on the outside), prompting someone in the crowd remarked, “Logan’s so gonna sweat.” And sweat they did. The music oozed out of their instruments and hypnotized the vaping crowd. Their long hair waved to the audience as they thrashed to the music. Lead singer Shane said, “We’ve waited a long time for this [playing Forecastle]. We’ve been dreaming of this shit for 10 years.” The crowd roared and during their song “Drips,” a full-fledged mosh pit started.

Boa romped the stage. Shane got air like David Lee Roth, but in velour bell bottoms. As the final performance of the Port Stage, they closed with gracious bows and Gavin threw his drumsticks into the crowd like any natural rock star. — Julie Gross

“I always wanted to go to Forecastle. This year I got me a ticket.”

That’s what Eastern Kentucky alt-country singer-songwriter Tyler Childers joked to the crowd from the Main Stage on Sunday evening. There is a bit of truth in the quip. He’s a relative newcomer to big stages and festival limelight, even though he’s spent years living in and playing music in the area. In 2017, Childers played a 400-capacity venue in Louisville. A year later, he sold out The Louisville Palace, a 2,600-person theater, for three night in a row. Yesterday, he had the second last set on the Mast Stage, with only The Avett Brothers performing there after him.

The catalyst for his success was his latest album, 2017’s Purgatory, which he played quite a bit from during his Forecastle set, including opening with “Whitehouse Road.” With a wild-eyed gaze, a booming voice and a band that lives on the modern outlaw edge of honky-tonk, Childers delivered one of the best sets of the festival.

Like Sturgill Simpson, who produced Purgatory, Childers’ sound hits new highs live, with the range and the raw power shining. It’s smokey dive bar throwback country that translates to a big, open field down by the river. The age range of the fans was one of the widest I had seen at any set of the weekend. And just like Sturgill, or Jason Isbell, or Margo Price, or any of the other innovative young alt-country singers who have exploded onto the scene, Childers and his band have a thoughtful earnestness and undeniable talent that’s refreshing and exciting. And it seems like everyone is listening. —Scott Recker

I don’t think I’ll ever grow tired of seeing Carly Johnson & the Believers perform. Sure, I know I’m not the only one who’s said that. Long before the Louisville soul/jazz singer debuted her new band and first record of original music in 2018, she was primarily singing jazz and pop covers — now, she’s poised to release a second album this October.

At first, I assumed my reasons for loving this queen onstage was simply for the songs. I still throw on her latest EP, Demons, from time to time, but something else hit me while watching her set on the closing day of Forecastle in the late afternoon glow at Port Stage. Just like the Forecastle Symphony’s wild rendition of Beethoven on Saturday, or even GRLwood from Friday, Johnson’s music doesn’t quite match with the indie rock/electronic names that dominate the lineup each year. Deeper within the grand pop-soul hooks of her music, there’s a lot of pain in there — I even teared up a bit when she sang “I Used to Cry.”

Johnson’s songs are tightly constructed, but she doesn’t hold back when it comes to holding out a note long. She’ll also step back, so her longtime musical partner Craig Wagner can rip down a guitar solo. Sometimes, I wish the others in her band could have that same chance to shine; the Believers features some of the best players in Louisville. But Forecastle set times are strict, and not everyone can get a turn. Overall, I’m still optimistic about the future of Forecastle as long as it takes more risks in the years ahead. —Lara Kinne