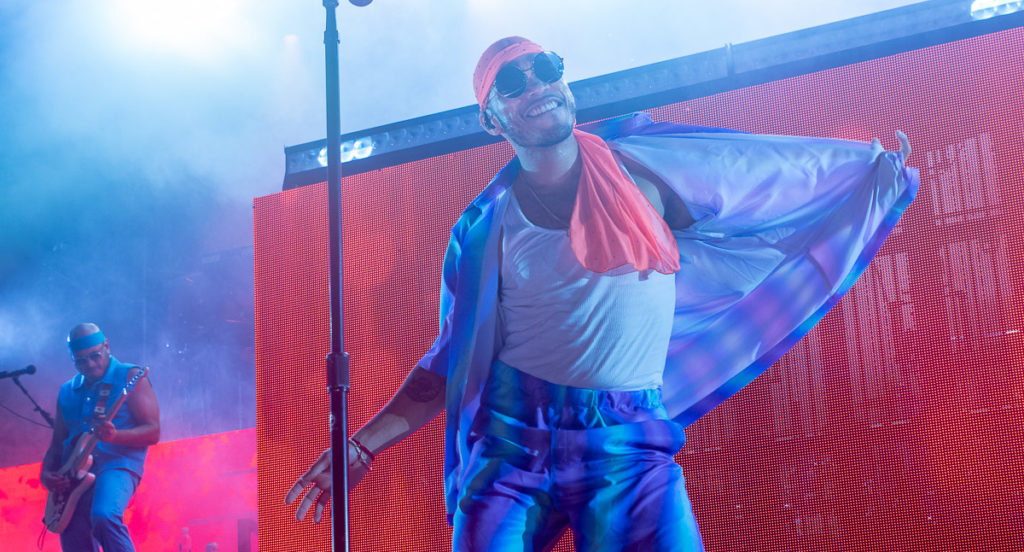 When I first heard Israel Nash play guitar, we were in a tiny mobile home together on the edge of the Ohio River. Well, technically, we were at Forecastle, Louisville’s music festival that draws a ballpark of 60,000 people. But, in this Tiny House Session, operating in a temporary mobile house behind the Mast Stage, we might as well have been a million miles away.

The Tiny House Sessions is a collaboration between Louisville Public Media’s WFPK and Notes for Notes, (N4N), a nonprofit based out of Nashville. The former organizes the programming and live-streams the events on Facebook –– featuring a 20-minute set each hour –– and the latter will eventually bring the sounds of the artists beyond the festival grounds using the recordings as a free educational tool to help young people learn how to create, record and mix music.

There are 26 physical N4N Studios scattered across the country, and the organization is expanding. N4N designs the spaces, provides instruments –– including DJ gear, and recording tools –– and staffs the studios, which become after-school activities for Boys & Girls Clubs.

You probably didn’t hear about the initiative last year because it was just getting off the ground, Stacy Owen, program director at WFPK Radio Louisville, tells me. Back then, there were just a few acts –– such as Ben Solle and Houndmouth –– and this year there’s a total of 13 playing over the course of the 3-day festival, including acts like Cold War Kids and CAAMP. “This year we’re focusing on live-streaming and building awareness for Notes for Notes,” Owen tells me.

Philip Gilley, co-founder of N4N, tells me that he hopes the program can end up in Louisville.

Nash, a “modern day hippie-spiritual,” is all for helping kids learn music. “This is what music is supposed to do,” Nash tells me. “It’s very special, full of love.”

You can view the Tiny House Sessions  –– sponsored by PNC and The Eye Care Institute –– on Sunday on Facebook Live or hear live on WFPK. — Hope Reese

If you choose to live a life free of animal products including what you eat, fear not, many of the Forecastle food vendors have you covered. First, just ask if there are vegan options. Under the vendors’ poster list of menu items (in small print), it states, “vegan options available, please ask for details.”

I was kicked out of the vape booth.

I told them, after smoking for years, that I’ve basically quit, now only bumming cigarettes from friends occasionally, and that I’m someone who has never bought any sort of vaping device. They said that they’re not trying to entice anyone to use nicotine, and that I had to leave. I thought they were kidding at first, but they weren’t. And I also thought that the idea of vaping was to create a safer alternative to smoking — which, of course, any sort of nicotine use isn’t good for you, but I thought that was the pitch.

Afterward, I walked over to the American Spirit tent, which is located by the Mast Stage, and they asked the same question. This time, I lied and they gave me a voucher that got me a pack of cigarettes for $2. They also gave me a token to drop in a jar that signified that they would plant a tree in honor of my purchase. And they gave me seeds to plant my own tree.

We’re now in a different era of nicotine marketing. One where they almost feel bad. —Scott Recker

Over the last few years, one Forecastle’s best sets has belonged to Teddy Abrams & Friends, a fluid group of local musicians led in collaboration with Louisville Orchestra conductor Abrams. Each time, they prove to produce some of the most unique musical experiences at Forecastle. And last night they had only four movements in mind, performing one of the most instantly recognizable, classical music pieces ever (and perhaps the most rock and roll): Beethoven’s “Symphony No. 5.”

Take a moment to remind yourself how this piece is meant to sound — the dramatic opening of those eight iconic notes, the elegant strings which follow suit, the brief pauses that underline each brisk, upward spiral into its next phrase, cascading in four movements of musical perfection.

Surely, Abrams had acknowledged the challenges of this ballsy approach to squeeze a full orchestra sound within a tightly packed Port Stage. Add that with a platter of nontraditional instrumentation, such as the duel saxophones of Drew Miller and Jacob Duncan, or the rhythm guitar of Craig Wagner. But this strange amalgamation is exactly what turned this set into something raw and beautiful; there is no perfect way to perform a classical piece in a chaotic festival setting. When you have this much talent on stage, you just fucking go for it. And execute it with love. — Lara Kinne