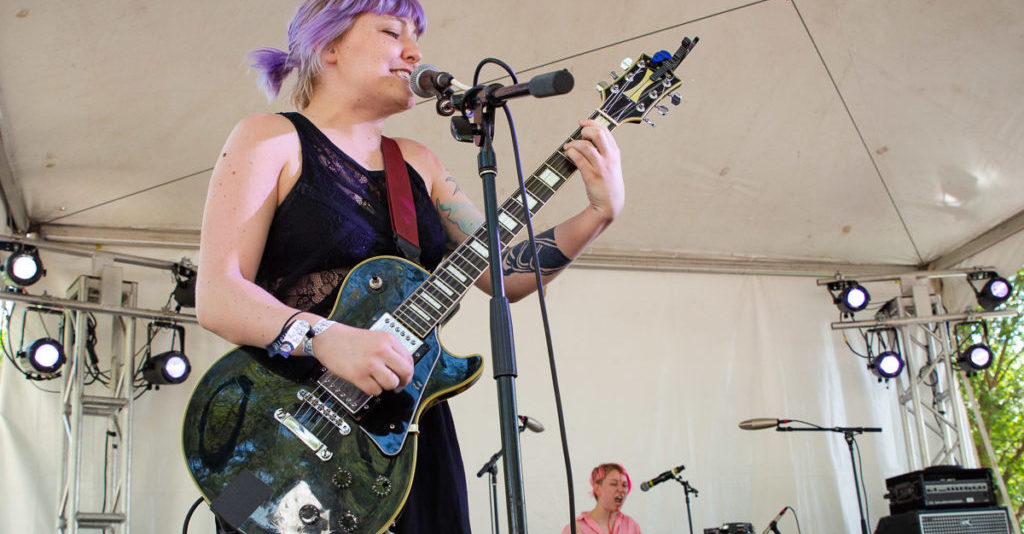 That’s typical for how GRLwood, Louisville’s own (self-named) “Kentucky Fried Queerdos” likes to kick off their set –– cranking up the heat, and stirring up a little discomfort.

Rae Forester, 27, and Karen Ledford, 24, were finally experiencing Forecastle for the first time: But for this scream-pop duo, the vantage point was from up on stage.

With Forester jamming on the guitar and screaming her head off –– “He said, ‘go fuck youself!’ –– so I did!” and Ledford holding a steady and energetic tempo on the drums, the act has blown up the local music scene. You may have seen them at a wide range of venues from Kaiju to the Speed Art Museum to the Pride Festival, and they also just wrapped up a six-week national tour.

WFPK’s longtime host, Kyle Meredith, introduced them –- with a quick apology for any other local bands present –– as his “favorite band in Louisville.”

For their Forecastle set, GRLwood mostly played from Daddy (2018) –– hits like “Bisexual,” “Wet,” and “Vaccines Made Me Gay.” They also included two tracks from their forthcoming album, I Sold My Soul To The Devil When I was 12  –– the single “I Hate My Mom,” (“It would be so much fucking easier if you fucked boys like a normal girl would, Rachael!”) and the first track “Get Shot” –– set to release August 2.

The band is “getting sick of ‘Daddy,’” Forester tells me. “We’re ready for Satan!” — Hope Reese

The Australian singer Julia Jacklin used her power of prose to enchant the crowd at Forecastle on Friday. Currently on a North American tour with her sophomore album Crushing, she played to a group that swayed to the gentle tunes of deep retrospection on relationship loss and moving forward. Jacklin introduced the song “Don’t Know How To Keep Loving You” as “very depressing” and crooned the chorus of “Don’t know how to keep loving you, now that I know you so well,” while her electric guitar was marked with the words “You Got This!” on a piece of masking tape.

When asked about her approach to writing gut-wrenching lyrics, Jacklin said, “That’s what I enjoy about songwriting. You’re not always writing about how you feel in the moment, but how you hope you’re gonna feel in the future.”

And about those guitar stickers? “I find recording difficult,” she said. “It’s very revealing in a way that shows aren’t. You’re hearing every technical fault and I tend to lose confidence pretty quickly when all of my faults are being blasted back into my ears. So, I put that on there like ‘Yes Julia, look at it, you’ll be fine.’ I’ve decided when we play the last show of this album tour, I’m going to rip them off. Start fresh.” — Julie Gross

BioGlitz, a Los Angeles-based beauty company that makes eco-friendly body glitter, truly has Kentucky roots. Its founder Saba Gray, 26, is a Louisville native. And with her company, she’s on a mission to show the world how to shine responsibly.

The concept is simple and brilliant — unlike regular body glitter products made from plastics, BioGlitz is 100% biodegradable and easily washes off the skin with soap and water. Its booth is located in the VIP sector of Forecastle. Guests are invited to sit down and choose their own color blends of glitter, while the friendly staff applies and encourages whatever aesthetic you’re feeling that day.

“Glitter is powerful. It sparks conversations, it brings people together,” said Gray. “If we see someone out and they look like they’re having less fun, they’re with a crew, or they look like they feel as if they don’t belong, we always welcome and offer them some glitz. And then we’re all together in this weird tribe. It really brings people together.”

The integral values of BioGlitz align

with the greater mission of the Forecastle Foundation to protect the environment, making this growing beauty company a welcome vendor at the festival for the past four years.

Gray is an entrepreneur who moved to New York, when she was a teen, to work in fashion, “and that’s really where the idea of BioGlitz was born,” she said. “I left Louisville when I was 17; I went to Spain for about a year and moved to New York. I knew New York would be where I’d end up, and I got this amazing job as a production assistant for a manufacturer. That’s really where I learned about the harm on the environment from micro-plastics and synthetic fibers and all the synthetic dyes that we use to create clothing that we wear and essentially throw away a month later.”

“I knew I was going to do something with sustainability in fashion,” she added. “The fashion industry is actually the second most detrimental industry to our environment behind the oil industry. … “

BioGlitz originally launched in Los Angeles and made its presence known through several West Coast festivals, but Gray realizes the potential for making a larger impact in the textile world. She wants to get BioGlitz on clothes, shoes and accessories that would replace glitter containing harmful plastics: “That’s where we can have the most impact.”

If you have VIP access and want to upgrade your festival spirit, be sure to visit the BioGlitz booth — and don’t forget to pick up your own vial of gorgeous colors to take home!  —Lara Kinne

If you’re outside the Forecastle gate, facing the river, when you walk in, the Ferris wheel is all to the right of the festival, down by the water. Two years ago, it was where the WFPK Port Stage was. Now, the Ferris wheel and another ride, the Sea Dragon, sit there, adjacent to the Party Cove, where the best view from the festival is.

On the first day of the Forecastle, I rode the Ferris wheel, and it provided a sweeping panoramic view of the river, downtown and southern Indiana, but it also made me nostalgic for the old location of the Port Stage. I remember seeing Bully there as the sun was setting, and it was my favorite stage location at Forecastle. Now, the Port Stage is located in Kentucky Landing, on the opposite side of the festival, and while it still has a lot of great bands, the location isn’t the same. Sure, where the stage used to be, meant you had to walk further, but, I mean, just look at this view. — Scott Recker