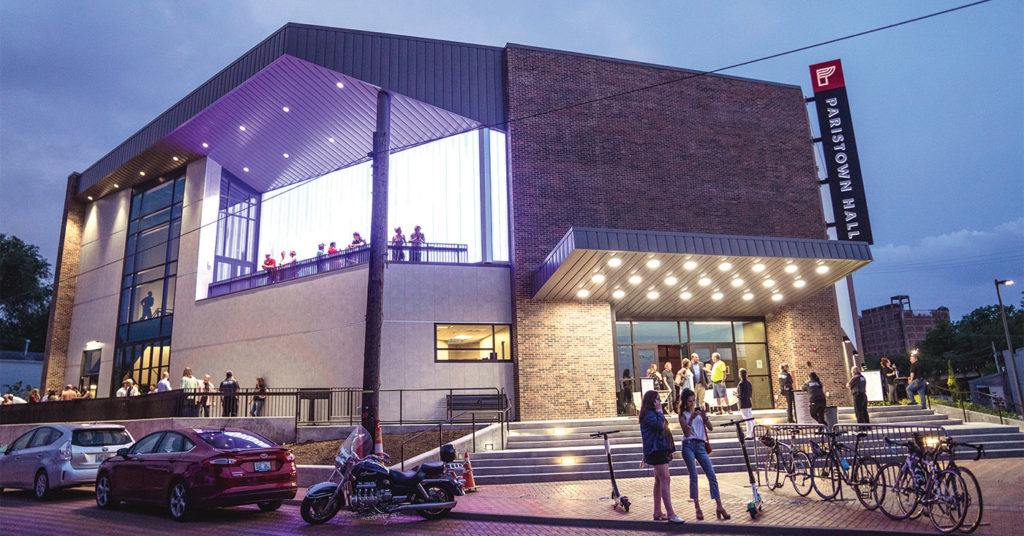 In the past, artists and bands that draw medium-sized crowds may have performed in Iroquois Amphitheater for a unique outdoor, seated concert in the warmer months. Or, maybe they took over Headliners Music Hall for a weekend, squeezing in fans over two nights instead of one. Or, perhaps, they bypassed Louisville altogether. But now, Louisville’s newest venue is expected to change this: Old Forester’s Paristown Hall on Brent Street near Broadway, a 28,000-square-foot standing-room venue that can accommodate up to 2,000 guests.

“There was a missing piece in the venue landscape here,” said Billy Hardison, booking agent for Production Simple, the company that will handle the venue’s booking.

“It’s been long needed here, all of us producers and promoters have done the best we can with what’s been here to try to make shows fit,” Hardison continued, “but that has been a compromise, not exactly what the artists or fans want for a lot of these shows.”

The venue’s construction, led by The Kentucky Center for the Performing Arts, is a $12 million project that has been in the works for the past five years and will open to the public Tuesday, July 23 with its debut concert — Trombone Shorty & Orleans Avenue.

Whereas Louisville concert halls such as The Louisville Palace and YUM Center cater to large-scale concerts, and spaces such as Headliners and Zanzabar offer more intimate spaces, Paristown Hall is a medium-sized venue.

How will that help? The band Interpol last stopped in Louisville in 2007, when it performed at The Brown Theatre. Hardison described the seated venue as “the right size venue [but not] the right configuration” for the band. Interpol will finally return to Louisville on Aug. 8 at Paristown Hall, which is expected to be a much better fit.

And even though Paristown Hall’s capacity is about double that Headliners, it doesn’t sacrifice intimacy. The Kentucky Center website described the hall as “a performing arts venue with the energy of a nightclub.” Projection screens show what’s happening on stage, and railing along the upper balcony keeps the feel of an open space.

“No matter where you are in the venue you’ve got a great view of what’s happening on the stage,” said Heather Weston Bell, senior vice president of community engagement for The Kentucky Center.

The venue is sleek and modern-looking, with a brick entryway, asymmetrical exterior and a light-up terrace. The building also flows into a public green space, which isn’t owned by The Kentucky Center, but is still a key part of the venue’s design. Weston Bell said that the center already has ideas for how it could use the community green area: screening movies, exhibiting art or even projecting the concert happening inside on the side of the building.

Weston Bell described the venue’s location, Paristown Pointe, as “an intersection of different Louisville neighborhoods” including The Highlands, Germantown and downtown. Paristown Hall is part of a larger, $28 million project that will add bars, restaurants and entertainment to the area. Weston Bell said the neighbors have been supportive of the new space. The concert hall is rigged with an acoustic system to prevent late-night rhythms from seeping into the streets.

“We feel the center’s decision to build this now was at the right time, and we think it is only going to impact the scene in a positive way,” Hardison said. •

An immensely versatile, explosive modern jazz band that’s both rooted and innovative, Trombone Shorty & Orleans Avenue makes you feel like you’re standing in the French Quarter, watching a wandering symphony that makes New Orleans so unique. Trombone Shorty is a prodigy from the mecca of jazz, and he’s been both pushing boundaries and keeping traditions alive for years.

The punk-soaked alt-country road warriors in Lucero have long been on the cutting edge of the Americana rock scene. Like bands like Uncle Tupelo or Drive-By Truckers, they’ve made a career by telling gritty tales of long nights, lost souls and desperate situations. But they’ve always balanced the darkness with sweeping guitar hooks, dancing piano and surges of raw power. Lydia Loveless balances country roots with melodic indie rock, and her writing is striking and clever.