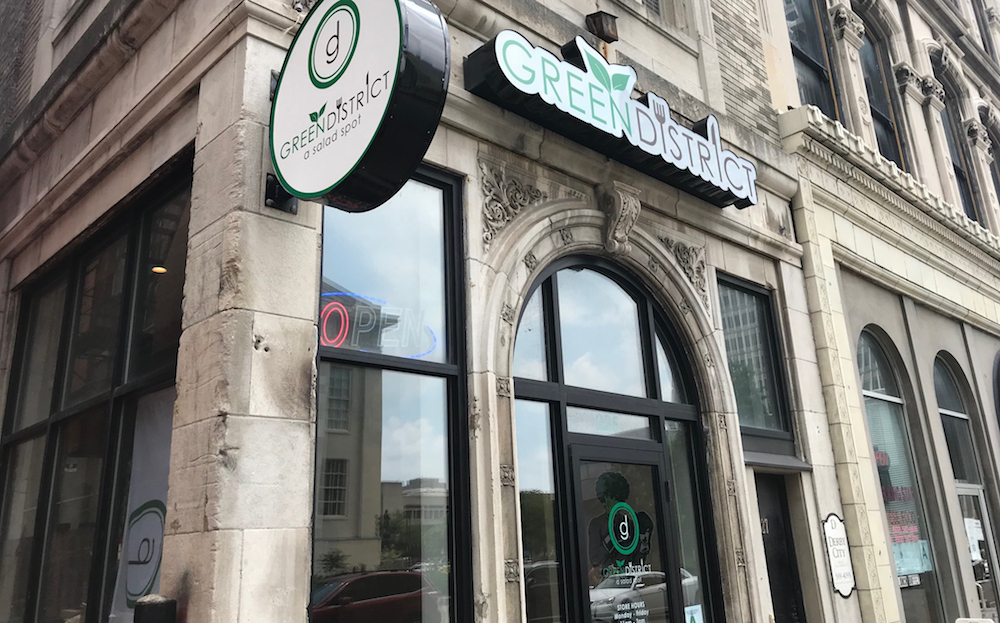 Green District Salads on South Fifth Street goes through 48 heads of iceberg lettuce and 72 hearts of romaine in a day. And almost every bit of the restaurant’s food discard, from the cores of that lettuce to the tops of strawberries, ends up in a brown, city-sponsored organic waste bin.

That is about to end, sending all of that waste into the landfill. Under the recently approved city budget, the $238,000 composting program was cut.

“It definitely pains us to see that instead of composting as much as we can, a lot of that could just go into the trash bin and into the landfill,” Jonathan Clark, operations manager for Green District Salads, told LEO. “The wet-dry program allows us to participate with the city to compost some of those things and have a modern, health-forward mindset.”

The wet-dry program began in 2014. Forty-seven restaurants get brown bins for composting food-based wet waste. The Hall of Justice and youth detention center participate, composting 25 to 30 tons per month combined.

Louisville Metro Waste Management will continue to empty orange bins for recycling, but the brown carts will soon disappear.

Flood said that under the program, 75% of waste is diverted from the landfill, but without composting this number will likely fall to 40%.

The budget decision won’t immediately halt the compost program. Public Works plans to give notice of at least one month in advance of when the program will end.

Louisville pays WestRock Recycling to collect the food waste, which is processed by Smith Creek Inc., a bulk compost producer in Southern Indiana. If restaurants are interested in continuing to compost, they can pay WestRock for the service.

Green District fills a 12-gallon bin every day, and sometimes one isn’t enough. But Clark said Green District has not decided whether to pay for the service.

As it worked on the budget, the council had considered scaling back recycling and yard waste pickup to every other week in residential areas, but backlash from residents convinced it that cutting the wet-dry funding was the better choice.

“We really looked at the effect on a community-wide [scale] to alternating yard waste and recycling in the urban services district,” District 9 Councilman Bill Hollander, chair of the Budget Committee, said. “There was a good deal of concern about what that would mean in terms of reduced recycling throughout the community and also increased littering and illegal dumping.”

Sarah Lynn Cunningham, director of the Louisville Climate Action Network, serves on the advisory committee for Louisville Metro Waste. Cunningham said she was disappointed that advisory members were not consulted about budget cuts. She recalled more frequent communication under Mayor Jerry Abramson. “The Fischer administration is way more likely to just make a decision, and we find out about it much later on,” she said.

Despite her frustration with not being more included in the talks, Cunningham said the decision to cut the wet-dry recycling in the urban services district made the most sense. “It’s a whole lot easier to change a program with a small number of businesses than it is with tens of thousands of citizens,” she said.

This year’s budget controversy sparked debates on funding for public services like libraries, public pools and youth detention centers. As pension-related cost increases loom for the following years, Hollander said, “Everything that we are saving this year is potentially on the chopping block next year.”

“If [Louisville residents] don’t want to see these cuts repeat themselves year after year, they need to speak up about the need for new revenue from some source in the community,” Hollander said, “including asking Frankfort, the General Assembly, to give us more revenue options.” •